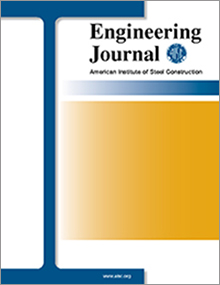 The 2010 AISC Specification for Structural Steel Buildings has expanded the scope in Chapter K, ""Design of HSS and Box Member Connections,"" to include a Section K4, ""Welds of Plates and Branches to Rectangular HSS."" An experimental program was undertaken to test various unreinforced HSS-to-HSS 90¡ T-connections subject to branch in-plane bending moment with the objective of determining the effectiveness of the welded joint. Twelve unique test specimens were designed to be weld-critical, and the results from the full-scale tests revealed that the current equation for the effective elastic section modulus for in-plane bending, Sip, given in Table K4.1 of AISC 360-10, is very conservative. A modification to the current requirement that limits the effective width of the transverse weld elements is proposed, resulting in a safe but more economical weld design method for HSS-to-HSS T-connections subject to branch bending moment. By reanalyzing the data of prior weld-critical tests on HSS-to-HSS T- and X- (cross-) connections subject to branch axial loading, it is shown that the proposed new weld effective length recommendation is applicable to these connections as well. It is also concluded that the fillet weld directional strength enhancement factor, (1.00 + 0.50sin1.5ëü), should not be used for strength calculations of welded joints to square and rectangular HSS, with the proposed revision, when the effective length method is used.