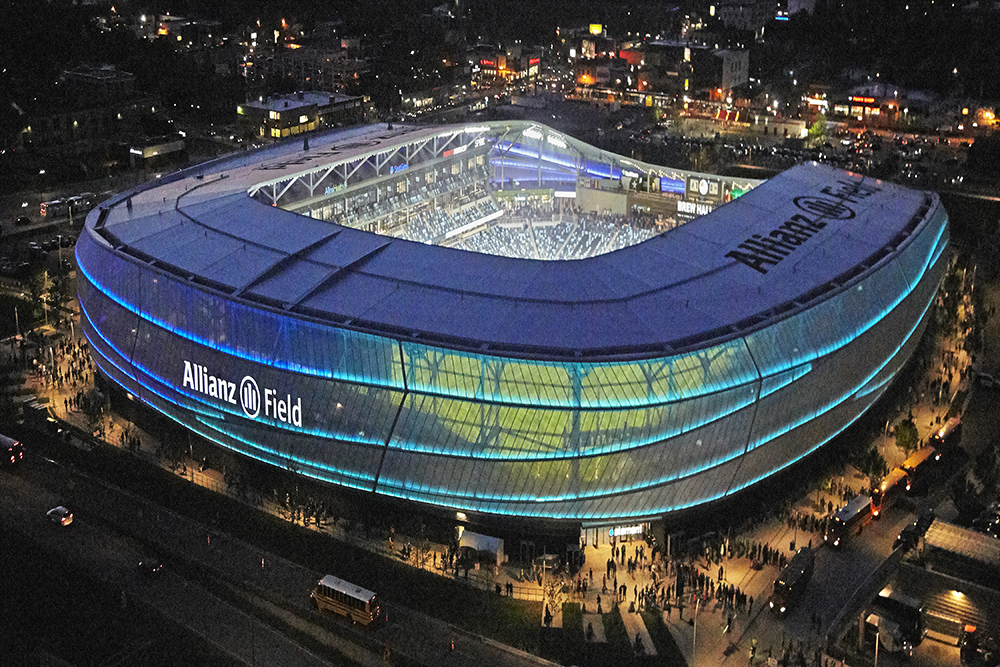 This type of project does not come to be without an intense level of engineering expertise, steel industry excellence, and a deep commitment to collaboration throughout the design and construction team. The iterative design process employed for the façade/skin design and the connections involved was impressive. I'm sure it is one of those things where it was complicated to implement and get everyone on board initially, but it made the process way smoother once things were up and running. Minnesota has been on my travel wish list, and this project just bumped it up a notch! -Monica Shripka, PE, director of sales, marketing, and business development, NCSEA

Multiple iterations of professional soccer have existed in Minnesota since the 1970s. However, the state never boasted a dedicated Major League Soccer (MLS) stadium.

That changed in April 2019 with the opening of Allianz Field in St. Paul, the new home of Minnesota United FC.

The team’s ownership desired a world-class stadium that would also as an iconic piece of art and architecture for the team and state, a venue that would dynamically convey the energy of the play on the pitch to viewers outside and allow them to see into the stadium.

It also needed to appear light, airy, and transparent yet still capable of standing up to the harsh Minnesota winters. Architect Populous’ design response is defined by a translucent skin wrapping around the entire stadium, made asymmetric and sinuous to avoid the horizontal “wedding cake” look of many traditional stadiums, and supported by large-diameter round hollow structural steel (HSS) shapes.

Meeting this vision required an innovative digital design process that used a common central geometry file for structural analysis, architectural design, and ultimately material fabrication. The common platform enabled near-real-time design iterations between all parties working as one project team, not individual firms. Using a common platform allowed for rapid 3D visualization enabling more informed and timely decisions to be made that were in the best interest of the project as a whole.

Walter P Moore integrated the structural frame analysis and fabric membrane analysis, which allowed for the optimization of the entire structural steel system. The integrated design captured the undulating geometry, varied loading conditions, and complex interface between materials resulting in an extremely cost-effective design without compromising the ambitious design vision. And a structural steel package totaling 4,500 tons was the easy, economical choice for the primary and secondary structure due to a variety of factors: lack of repetition, long cantilevers, irregular geometry, and schedule.

Complementing the façade, a large canopy protects fans from unpleasant weather while leaving the pitch open to the elements allowing fans a true open-air stadium experience. A variety of canopy shapes and types were considered early in the design process, including a tensile fabric canopy, cantilevered truss, and a cantilevered propped girder system. Ultimately, the propped girder system was chosen as the most economical system for the size of canopy desired. The resulting 145,000-sq.-ft canopy covers approximately 85% of the seats, simultaneously protecting fans from the elements and reflecting sound onto the pitch below.

Structural steel framing creates a light and graceful support of the large canopy while having sufficient strength to support the large snow loads typical of a Minnesota winter. A 3-in. steel deck spanning 13 ft was used to minimize the number of purlins supporting the canopy. Each purlin frames into a large wide flange girder at each gridline, at a 42-ft, 8-in. bay width. The girder cantilevered out 78 ft from the back-of-bowl column and is supported by a single strut that props the girder up. Although this results in a slightly heavier system than a cantilevered truss due to additional bending imposed on the girder, it creates a much more open structure and has fewer pieces to fabricate and erect. At the leading (inner) edge, the girder tapers down from 36 in. to 16 in., matching the depth of the steel purlins creating a consistent thin profile around the stadium. At the north end of Allianz Field, the canopy gracefully swoops down, lowering the overall profile of the stadium.

For the signature feature—the building skin—Walter P Moore partnered with Saint-Gobain to develop a new polytetrafluoroethylene (PTFE) fabric that provided both strength and transparency. In order to minimize cost, the fabric needed to span as far as possible between support lines, which induces large bending loads in two directions along those support lines. Simultaneously, those support lines needed to curve around the stadium, creating the desired architectural appearance. Round 18-in.-diameter HSS provided the ideal support system. These sections, dubbed “driver pipes,” serve to “drive” the skin’s complex geometry and create the supporting structure that gives the skin its distinctive form.

The PTFE fabric was connected to a continuous aluminum extrusion that was then connected back to the driver pipes through a built-up, tee-shaped plate assembly at 18 in. on center. To provide additional tolerances, the plate had four slotted holes at a 45° angle in each corner, which allowed the aluminum extrusion to move vertically or horizontally to maintain proper alignment. The driver pipe connection back to the column assembly was through an endplate to resolve the bi-axial moments and large axial loads. The connection used slip-critical bolts in oversized holes allowing the diver pipe to be adjusted during erection into its precise final location.

In addition, Populous desired the exterior skin to appear continuous without any noticeable joints. Achieving this vision required eliminating expansion joints from the driver pipes. The result is that the driver pipes act as a giant rubber band encircling the stadium. They expand and contract with changes in temperature, resulting in substantial loads within the driver pipes. The structural team took advantage of the natural breaks in the stadium seating bowl corners to allow the seating bowl and west premium tower to breathe naturally. This approach transfers most of the large thermal stresses from the driver pipes into a select few corner
columns resulting in a far more efficient structural system.

To achieve the owner and architect’s ambitious vision, Walter P Moore’s structural and enclosure teams knew traditional design and coordination techniques would not be sufficient. The critical innovation was the common digital data platform shared by the structural and architectural design teams and ultimately the steel fabricator. During the design process that began in 2015, Walter P Moore and Populous developed a digital
workflow to incorporate complex architectural geometry into structural models rapidly and communicate back the impacts in quick turnarounds to modify the architectural design. This created a symbiotic relationship of design, analysis, and performance. Essentially, this equated to having a single file in which all parties were accessing, processing, manipulating, and rapidly sharing the data, which enabled quick decision making and led to an efficient system within the time and budget constraints. The numerous iterations of the overall geometry optimized design aesthetics and cost-efficiency simultaneously.

Another innovation took advantage of steel fabricator Merrill Steel’s trucking equipment and proximity to the job site (180 miles). The canopy girders/struts were fully fabricated in the shop, painted, shipped to the site, and then erected as a single piece to sit directly on the building columns. The longest canopy-plus-back-span piece shipped to the site measured in at 110 ft long (78 ft cantilever plus 32 ft back span), 19 ft deep, and 23 tons. Due to the preassembled shop fabrication of the canopy, two canopy girder/strut assemblies were erected per day. The entire 145,000-sq.-ft canopy was erected in just 18 weeks, including the erecting in the harsh months of January and February. Assembling the full girder/strut allowed for aesthetically pleasing welded connections to be used. Additionally, it allowed a higher quality paint system, without field painting or field bolting of surfaces, that will increase the longevity of the paint and steel system.