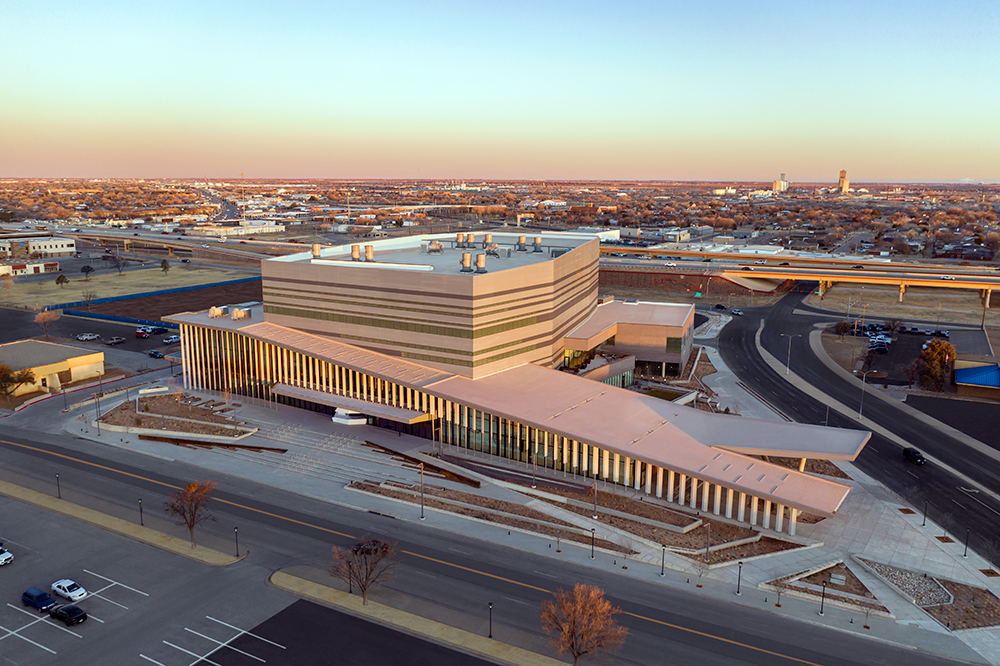 THE SPIRIT OF BUDDY HOLLY is alive and well in the form of a steel-framed performing arts center in the famed rocker’s hometown.

Completed last year, the Buddy Holly Hall of Performing Arts and Sciences in Lubbock, Texas, has fulfilled the aim of creating a hub for the arts and culture community as well as a venue capable of attracting world-class performances. In addition, the new $158 million venue plays home to Ballet Lubbock, the Lubbock Symphony Orchestra, and the Lubbock Independent School District Visual and Performing Arts. At a total of 218,000 sq. ft, it houses the 2,297-seat Helen DeVitt Jones Theater, the 415-seat Crickets Theater (named for Buddy Holly’s band), a 5,600-sq.-ft multipurpose room, a 20,000-sq.-ft ballet school, a 3,300-sq.-ft restaurant, 21,400 sq. ft of back-of-house space, 36,100 sq. ft of lobby space, and a 6,000-sq.-ft covered outdoor event/performance space.

The complex was initially conceived as a predominately reinforced concrete building with structural steel framing limited to the roof over the theaters and main lobby, the monumental stair, and a few other select elements. But on the advice of the construction manager, the team developed an alternative scheme that expanded the use of structural steel to include all the above-grade framing, including the theater balconies, the main theater stage, and the lobby was developed. In this scheme, reinforced concrete was limited to the foundations and the ground floor, as well as the two elevator cores, the exterior portion of the roof/canopy that formed the bird’s tail, and the tilt-up walls on the studio theater.

The team completed an evaluation of both schemes using the criteria of cost, schedule, the size of the relevant skilled labor pool, the availability of tradespeople in the local marketplace, and the ability for the quality expectations established with the Owner to be met. The structural steel scheme was determined to have an advantage in every category and was given the green light as the project proceeded into the design development phase.

The main performance space, the Helen DeVitt Jones Theater, presented multiple structural challenges and opportunities. The audience chamber, with a large main level and three horseshoe-shaped balconies, was designed to enhance audience proximity to the performers on stage, creating a “not a bad seat in the house” scenario. Theater balconies of this type are typically constructed out of reinforced concrete, so using structural steel framing instead required some creative thinking. The geometry of each balcony was highly complex, requiring careful thought on the framing layouts, member selection, and connection details to achieve practical, cost-effective, and buildable solutions.

A series of balcony rakers cantilever up to 32 ft from columns placed just behind the theater back wall. Vibration from rhythmic activities on the balconies was a major consideration given the large cantilever length of the rakers. The design uses 40-in.- deep rakers cranked in several locations to follow the profile of the balcony. The design team used the curved horseshoe shape as an advantage, with a tension ring member placed near the front of the balcony to meet the vibration limits. To maintain a thin edge profile and sightline clearances below, a shallower 14-in.-deep section was spliced onto the end to create the front two rows of the balcony. The horseshoe nature of the balconies required each of the structural steel members for the risers to be bent to follow the curvature of the space. On the lower balconies, standard wide-flange beam sections are used for the risers, which span between the rakers, support concrete on deck for the treads, and serve as formwork for the concrete risers. However, on the uppermost balcony, the height of the risers meant that the use of standard steel sections was not practical or cost-efficient. To address this situation, the team created a steel “Z” profile that was not only curved but also varied in height to follow the profile of the seating. This profile was created by bending an angle for the top and an angle for the bottom flanges, followed by welding on a variable height steel plate for the web. Web openings were then incorporated to allow for air distribution below each of the seats.

Steel also helped achieve structural success in the three-story Christine DeVitt Main Lobby. A dramatic shift inward of the main exterior wall at the upper levels of the lobby was driven by aesthetic and acoustics considerations. To keep the lobby space column-free, a roof truss spanning more than 150 ft was introduced along this line. The 45-ton truss varies in depth from 12 ft at supports to 14 ft at midspan, which was achieved through a sloping top chord, and was erected using two cranes. This truss supports many different elements, including the lobby roof, exterior cladding, the lower sloping roof overhang, and the main entrance canopy. The exterior of the building was inspired by the colors and shapes of the landscape of West Texas, including the prismatic and layered rock formations of nearby canyons, and features a combination of solid panels and linear windows suspended from this truss.

The bottom of this cladding is terminated by a sloping roof that pushes out from the exterior line above and is supported by a line of columns along the curtain wall below. The roof then continues by cantilevering past the columns to provide a sunshade to the curtain wall from the Texas sun. The back span of the sloping roof is supported from the truss. Round, slender, architecturally exposed structural steel (AESS) hangers emerge from below the sloping roof and extend down to support one end of custom tapered plate girders at level 2. These custom tapered plate girders support the VIP lounge area on level 2 and then cantilever out 25 ft to create the main entrance canopy, which is a modern take on the marquee.

The visual highlight of the lobby, the monumental stair, conveys a grand architectural and structural statement thanks to hollow structural sections (HSS) and steel plates. The stair soars 56 ft across three stories and uses 145 tons of steel. The aesthetics of a thin outer edge and glass guard is contrasted with the solid white plastered central spine, with the latter supporting cantilevering stair treads that vary in length between 8 ft and 14 ft. To form the helical shape of the stair, the HSS chords for the central spine and outer stringer were bent in two directions through induction bending. The HSS riser, steel plate tread, and outer HSS stringer were then connected to the central spine before finally welding the central spine web plate onto the HSS chords. The long spans, slender profile, low mass, and low damping ratio resulted in a low-frequency system that was particularly vulnerable to vibrations from human activity. Through finite element modeling and analysis, the team found that supplementary damping was required to meet the vibration limits, so a tuned mass damper (TMD) was added on the second and third flights of the stair.

Another significant element in the lobby, a series of glass fiber-reinforced concrete fins, also benefited from HSS. The fins not only add a dynamic aesthetic element but also contribute to shading the large expanse of curtain wall. The challenge was how to support these undulating fins, which are situated 5 ft off the curtain wall while giving them the appearance of floating. The solution was to fit a slender structural steel element within the profile of the fin, one that brought enough strength to support the fin weight and sufficient stiffness to prevent wind-induced fluttering. The team considered several HSS sizes and profiles, such as circular and rectangular, that were strong and stiff enough but could not fit within the sleek architectural profile of the fins—but oval HSS could. These elements were hung from the sloping roof overhang above, and the Modern Steel Construction | 39 profile for each one was varied over its height by splicing three sections together; oval HSS11×6 was used inside the fin, and oval HSS8×4 was used above and below the fin.

Given the complexity of the project—which involved three architectural firms and three structural engineering firms, all responsible for different areas of the complex—the larger structural engineering team made the conscious decision to share and work in one Autodesk Revit model for the project and produce one consolidated set of construction documents. Using Autodesk BIM 360 and a live chat feature made this level of collaboration and coordination between different offices possible—e.g., two of the engineering firms coordinated in real-time on the superstructure and substructure as each responded to the design progression and coordination from the broader team.

One other example of the project team’s collaboration in action is in the theater, where the related engineer used a parametric Grasshopper model developed by the design architect to generate the custom balcony risers inside Revit as 3D parametric objects, as this was the only efficient way to convey the extremely complex geometry. The architects then used the live model for their background, with the engineer controlling future adjustments in the Revit model to precisely coordinate the steel framing with the refinements to the architectural profiles— much like a musical ensemble performing in the space would work in perfect harmony.