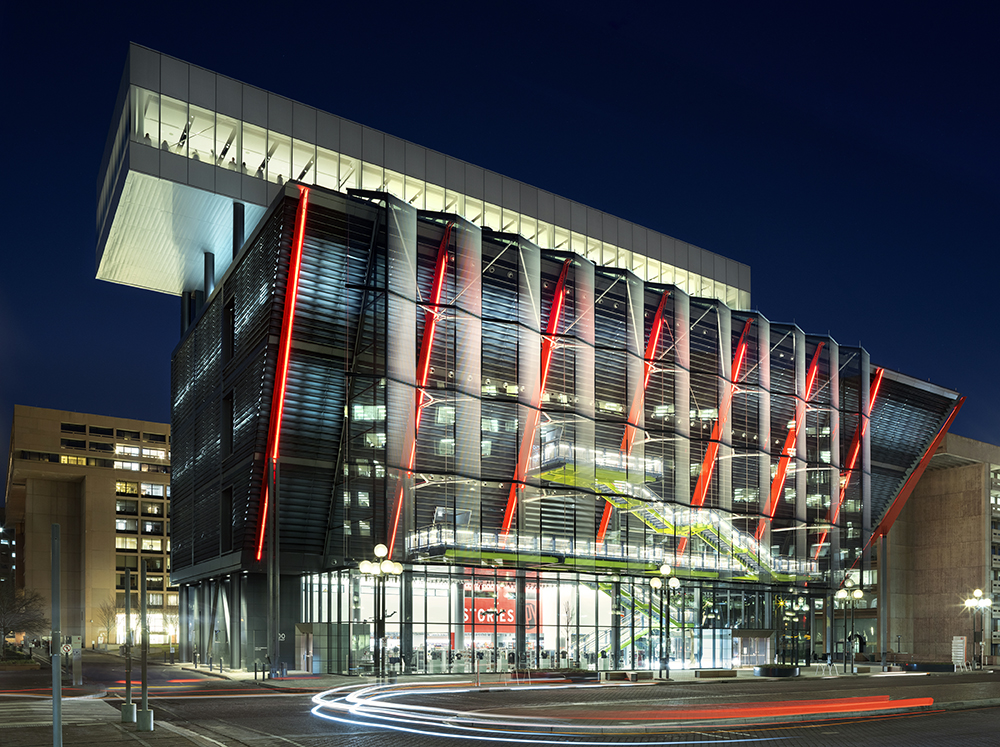 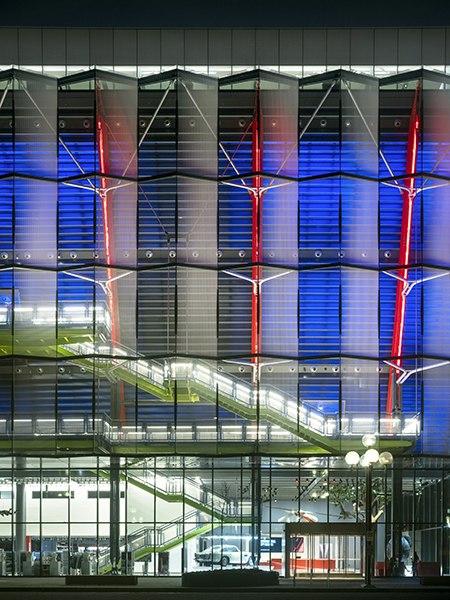 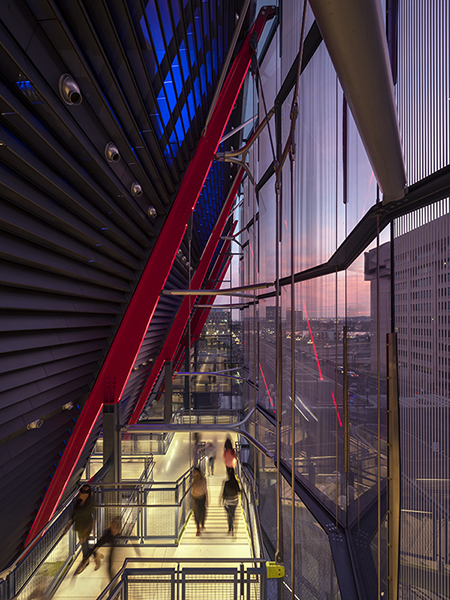 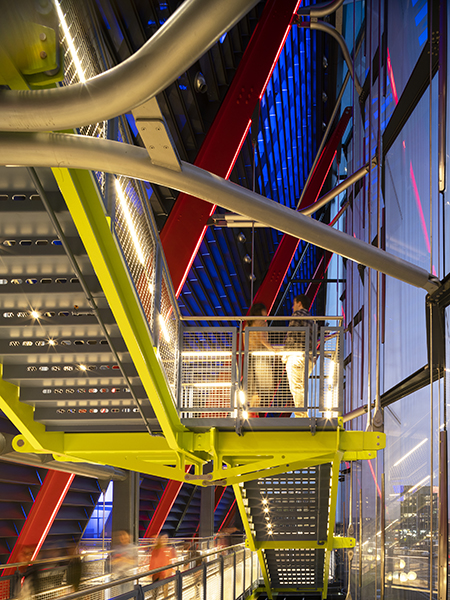 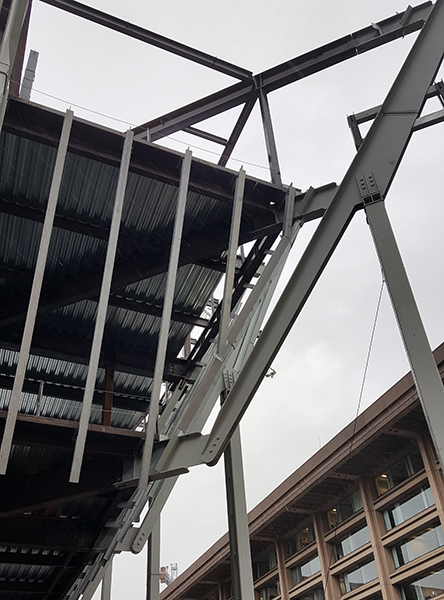 The International Spy Museum needed a new place to hide in plain sight.

Having outgrown its original home in Washington, D.C.’s Penn Quarter, the organization was in pursuit of a new iconic location that would allow it to effectively continue its mission of educating the public and showcasing the history of espionage. The Museum identified 700 L’Enfant Plaza, a few blocks south of the National Mall, as the ideal location to meet its needs. The new steel-framed, 141,000-sq.-ft, eight-story, $162 million project includes three floors of museum exhibits resting on a base of retail, education, and lobby spaces. The facility is topped with offices, additional educational space, and a dramatic events facility with a green rooftop and sweeping views of the city.

The overarching goal was to create a world-class museum with Smithsonian-level thermal and humidity controls in an architecturally impactful building. The Museum partnered with JBG Smith, then hired Rogers Stirk Harbour + Partners and Hickok Cole to make their vision a reality. Creativity and collaboration were critical to the success of this project, which was to be built above an existing operational subterranean shopping mall and garage that support a major Washington Metro station and surrounding office buildings. The team was also faced with a
strict budget and a 48-month design and construction schedule.

Washington is generally known as a “concrete town,” where cast-in-place concrete structures are prevalent. However, as design discussions began during the early phases of the museum project, it became clear that structural steel was the best choice for the building structure, as steel provided the greatest flexibility needed to achieve the desired design aesthetic as well as provided engineering, constructability, and cost benefits.

The building’s concept is a play on the business of espionage: being hidden in plain sight. One of its main architectural features is a five-story glass atrium, dubbed the Veil, that is suspended in front of an enclosed exhibit box and feature staircase. This unique structure provides a stage for the movement of people throughout the exhibit levels, contributing to the pedestrian experience along 10th Street. With its evocative form, powerful exposed structural steel sloped columns, and pleated glass veil, the Museum serves as a catalyst to revitalize L’Enfant Plaza.

Within the Veil lives an intricate series of monumental stairs and platforms constructed from architecturally exposed structural steel (AESS) members of varying shapes and profiles, all of which had expressed connections to the built-up AESS building columns.

Structural steel provided the strength and stiffness needed to achieve the architectural vision for this space by keeping the structural members as small and attractive as possible. Another dramatic example of the museum’s elegant design is the series of “L-shaped” red-painted columns, constructed from grade 50 steel plates, along the south and west faces that slope at an angle of approximately 2.5:1 vertical to horizontal and serve as part of the building’s gravity load-carrying system. The columns taper and have reduced depths at the top where structural demand diminishes to reduce material cost and for aesthetics.

The museum superstructure is constructed above an existing four-story concrete structure built in the 1960s, and the addition of a new building above was not anticipated in that original design. In order to support the new museum superstructure loads, strengthening of the existing concrete structure was necessary. It therefore became very important to keep the museum’s structural weight as minimal as possible in order to make this existing strengthening cost-effective—another reason to employ a structural steel frame.

The typical museum floor system consisting of long-span steel beams and girders with lightweight concrete on composite metal deck provided the open spaces required for the museum programming while minimizing the self-weight of the structure. In addition to factoring in the existing building space below the museum, the project also had to factor in the proximity of the surrounding buildings and streets. As the site is not much larger than the building footprint, the project required closely coordinated deliveries and tight sequencing.

Steel brought several advantages from a constructability perspective as well. The construction schedule for the project was aggressive from the start, and steel allowed the building superstructure to be completed in a faster timeframe than would have been possible with cast-in-place concrete options. In addition, by implementing a design incorporating structural steel with unshored composite metal deck construction, the need for expensive and intricate concrete formwork was eliminated from the project. The entire team understood from the outset of the project that challenges would arrive due to the complex design. Months of preplanning, 3D modeling, mockups, and field tests were performed to ensure that what was shown in the model could actually be built in the real world. One complication became evident during non-destructive testing of splices between the building structure and the sloping column cantilevers. The cantilever sections were W30×124 sections with ¾-in. web doubler plates on each side of the web. These cantilevers were then spliced to main building beams made with the same built-up section with a complete-joint penetration (CJP) splice. When ultrasonic (UT) testing was performed, the interface between the doublers and the webs of the W30 beams created false-negative results, but the engineer and testing agency responded by developing a testing procedure that would satisfy the design requirements.

From a design standpoint, the museum makes its mark by featuring AESS as a prominent portion of the architecture and structure and wasn’t just employed as a highlight or an accent. Unlike most projects in our hard work and structural craftsmanship is often hidden or covered by fireproofing/finish trades, the structural steel is the premier architectural feature seen by museum patrons, visiting tourists, or even those passing by on nearby I-395. As such, a high level of coordination was required at the sloping front of the building, where the curtain wall and  monumental stair are both connected back to the sloping steel columns. Due to the design of the sloping columns, connection points for the curtain wall and stair had to be incorporated into the shop fabrication of these columns. This meant that connection points had to be coordinated with each supplier’s internal tolerances and also allow for the project-specific steel erection tolerances. Both the stair hangers and curtain wall connections were attached back to the columns by a 2-in. pin, so there was no room for error once the structural steel was fabricated and erected.

Another façade system that had to be factored in was the metal panel rain screen system. To support this system, vertical W6 girts were placed around the entire building perimeter 5 ft on center. Due to the project schedule, these metal panels could not wait for field dimensions to be taken between sloping columns prior to production, so the location of the steel columns had to fall within the prescribed AESS tolerances. The majority of this coordination took place by way of model sharing between individual subcontractors and a weekly, sometimes daily, building information modeling (BIM) process in which the team established allowable tolerances and individual system requirements.

The various AESS elements also involved different finish requirements, some of which necessitated different fabrication and erection details in order to accommodate the different coating types and thicknesses. These included AESS that would remain uncoated for fireproofing, interior AESS prime painted for finish coats, interior AESS prepped for intumescent coatings, exterior AESS hot-dip galvanized and prepped for finish coats, and exterior AESS hot-dip galvanized prepped for intumescent coatings. To make sure the finish of each piece of steel was correct, the steel team traded color-coded models with the design team to visually check and ensure each piece came to the field with the correct finish. (For more on the various AESS levels and their individual requirements, see “Maximum Exposure” in the November 2017 issue of Modern Steel Construction at www.modernsteel.com.)

Of course, like the activities of a spy, time was of the essence with this project. Steel fabricator SteelFab’s involvement began approximately one year before it was awarded the contract for the structural steel package. During this time, conceptual and schematic design-level feedback was provided to general contractor Clark Construction and the rest of the design team about some of the feature elements on the building. The willingness of the project team to engage a steel fabricator well ahead of the procurement stage helped steer certain design decisions in directions that maintained the architectural intent but allowed for more fabrication- and erection-friendly details.

Had this project been procured under a typical design-bid arrangement, it wouldn’t be an exaggeration to say that three to four months would have been added to the structural steel schedule alone. A significant portion of the upfront work on the project involved delving into the details of earlier discussions about coatings, connections, tolerances, and AESS expectations in general. Only with the full buy-in of all project team members was this kind of progress achieved in such a short amount of time.

For more information on the International Spy Museum, see “I Spy” in the June 2021 issue of Modern Steel Construction.