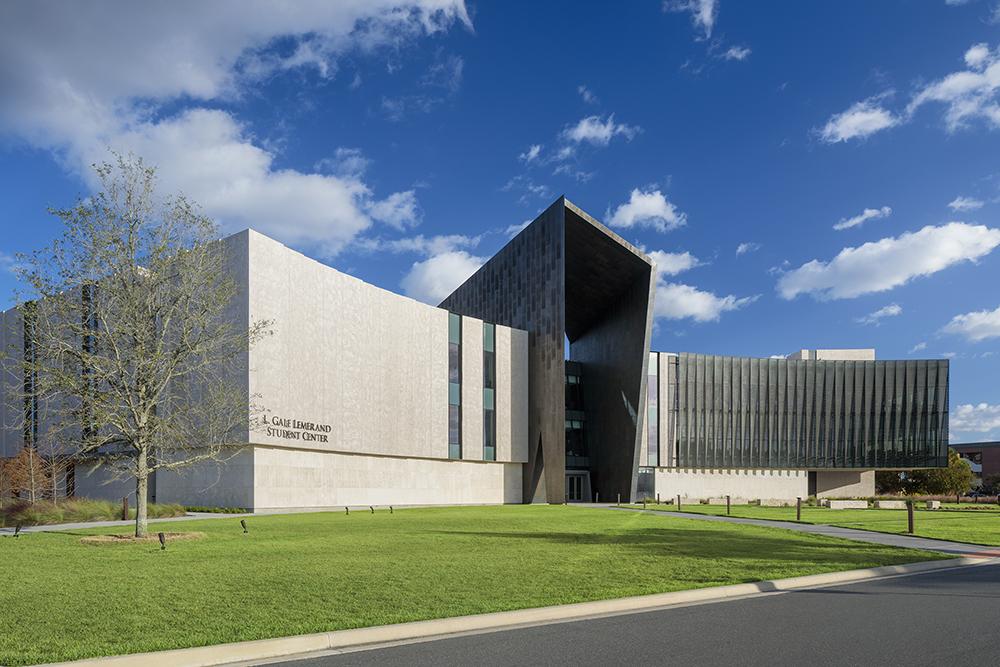 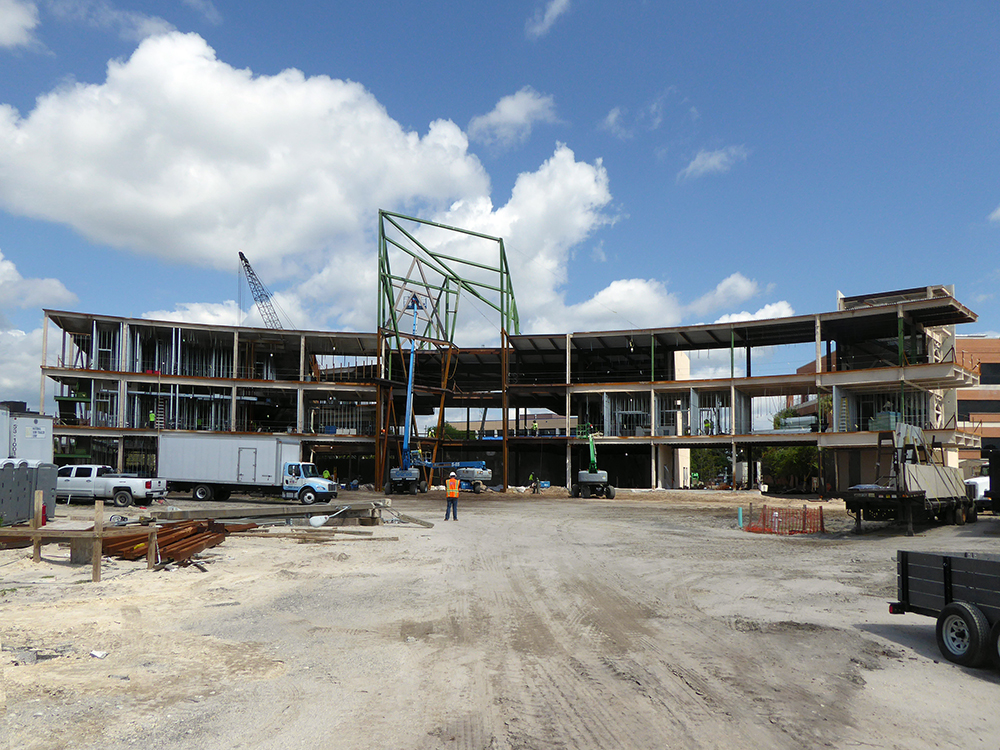 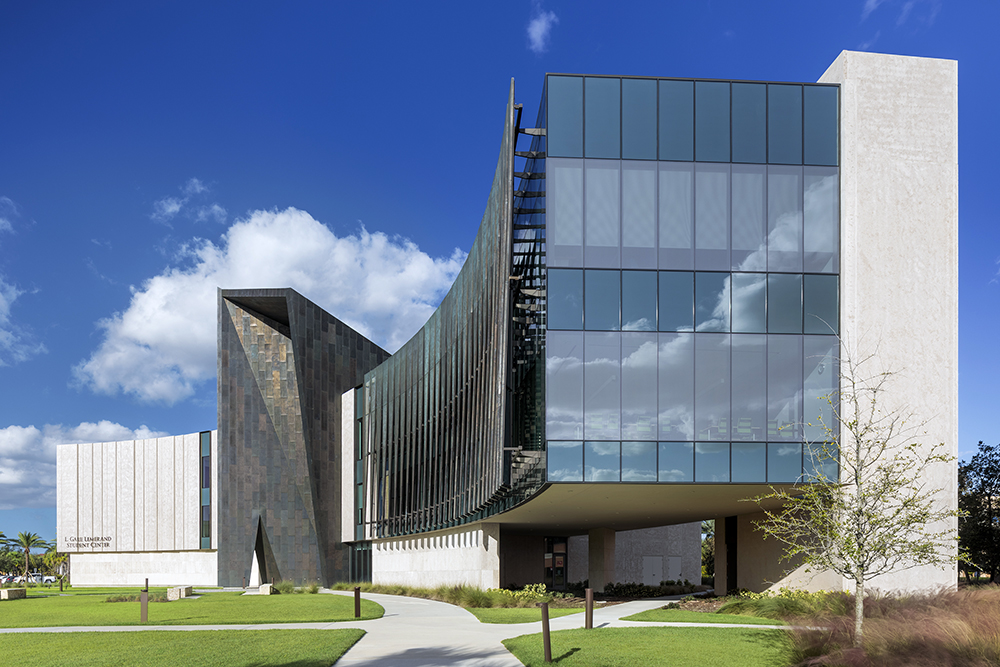 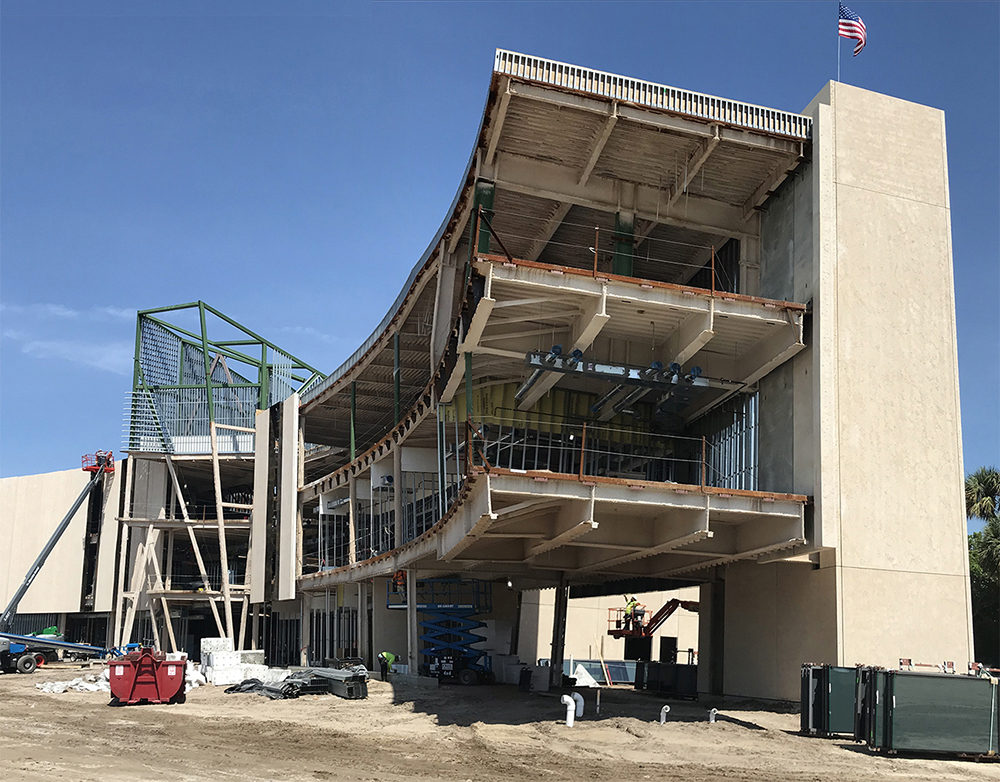 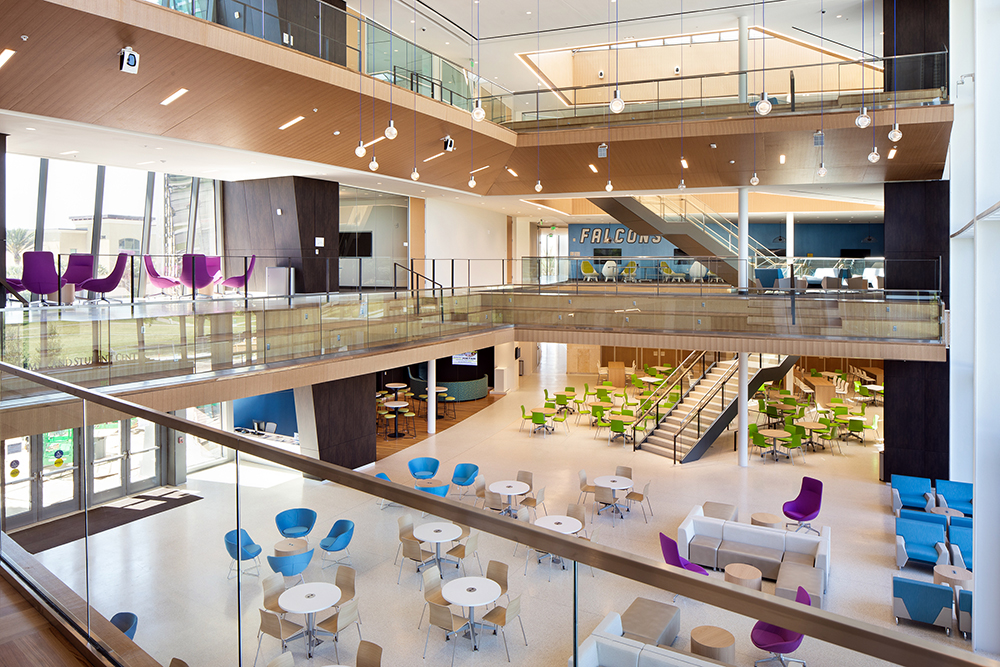 As much as I enjoy clear, straightforward structural design I also take delight in the opposite. Hiding the support for the cantilever in the stair tower enclosure is an example of the structural engineer applying the stage magician's tricks of sleight-of-hand and misdirection. And to a magical effect! I also appreciate the fact that the two bold moves of the cantilever and the portal were not just design-ey affectations but served a very clear purpose in creating a building that functions as an open and welcoming gateway to the campus. - James Puckhaber, AIA, corporate practice leader - Atlanta, The S/L/A/M Collaborative

Colleges and universities often design buildings as "gateways" from a town to a campus or from one campus area to another. In the case of Daytona State College’s new steel-framed student center,  this approach was more than just figurative.

The Board of Trustees envisioned the new building as a gateway that would transform the college’s appearance to the community of Daytona Beach and better represent its mission of advancing the
economic development of the city and Volusia County.

The existing campus essentially “turned its back” on the community of Daytona with inward-looking and internally accessed buildings surrounded by parking lots between public roads and the campus. The effect was that of a shopping mall. The new 75,000-sq.-ft steel-framed student center on the edge of campus reverses this perception with a massive bronze-clad gateway portal between the community and the campus, emphasizing transparency and openness.

Like coral stone outcropping rising from the Floridian shoreline, an organically curving coral stone and bronze wall faces the world-famous Daytona International Speedway Boulevard and embraces visitors like two outreached arms forming a landscaped welcome lawn at the campus entry. Rising from the center of the gently curving wall is the portal, framing the opening to the student center and giving passage to the main quadrangle and campus beyond. Additionally, to allow open access to the center of campus, a portion of the curving stone wall cantilevers above grade to allow students and staff to pass unimpeded from parking to the campus quad.

The design team selected structural steel because it possessed the best performance characteristics to achieve the project goal of openness. Most prominently, it allowed the team to economically and efficiently create the 90-ft-tall portal in the center of the building that both separates and joins each wing (side) while also effectively resisting hurricane-force winds. The light structural steel framing for the portal also provided the perfect substrate to anchor the bronze rain screen, as well as easily achieve its angular form. Beyond the gateway, steel frames the rest of the building as well and also facilitates a large opening in the center of the floor plate that creates a three-story student commons with cantilevered amphitheater seating—while also transferring lateral loads through the building.

The most significant structural challenge for the project was cantilevering two stories of the student center over the pedestrian pathway connecting the campus parking lot with the center campus quadrangle. The new building’s footprint impeded this preexisting pedestrian connection and in order to maintain it, the team lifted the building above grade and cantilevered a portion of the second and third floors over the pathway. The challenging part was creating a rigid frame that would not want to overturn while transferring lateral forces. The solution was to create a Vierendeel truss at the southeast corner of the building, before the cantilevered portion of the floor, and attach the side of the truss to a freestanding stair tower. The structural frame of the stair tower acts as a mast supporting the truss, which in turn supports the second and third floors and allows pedestrians to move freely beneath.

The building’s steel framing also assists with the sustainable design strategies of a high-performance building. The large, glazed facades on the south and west express welcome and openness but also presented a significant design challenge for combatting solar heat gain in the steamy Florida environment. The team addressed this situation by designing bronze solar screens to naturally ventilate the façade and reduce heat gain on the building and load on the cooling systems, with the screens being attached to the steel framing.