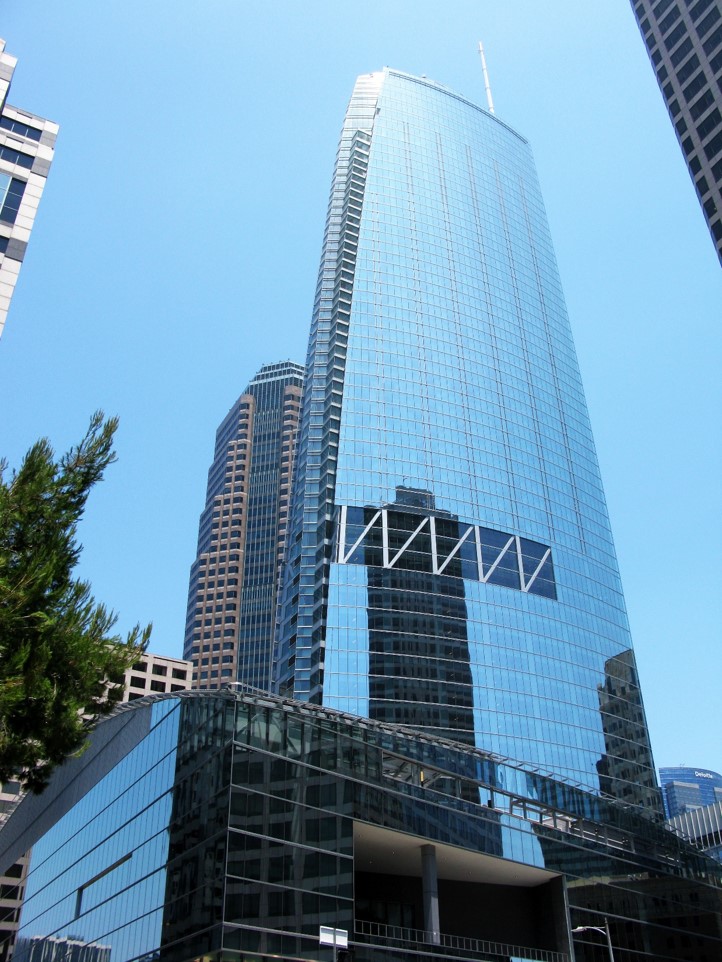 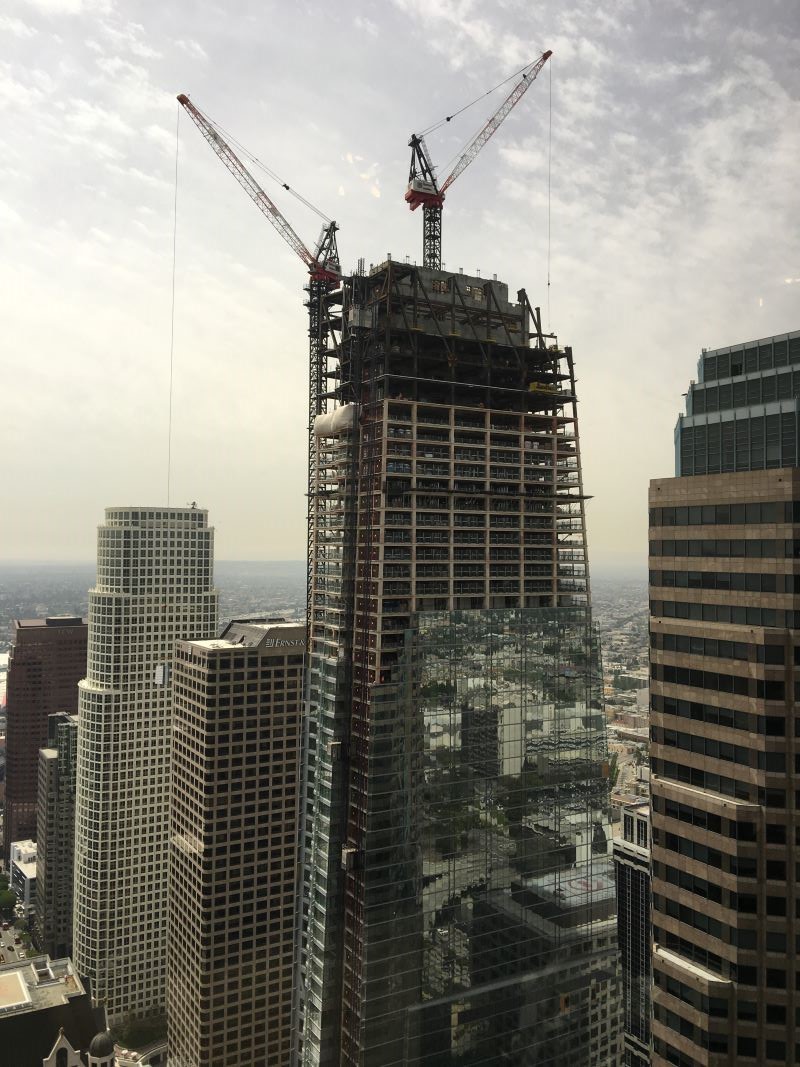 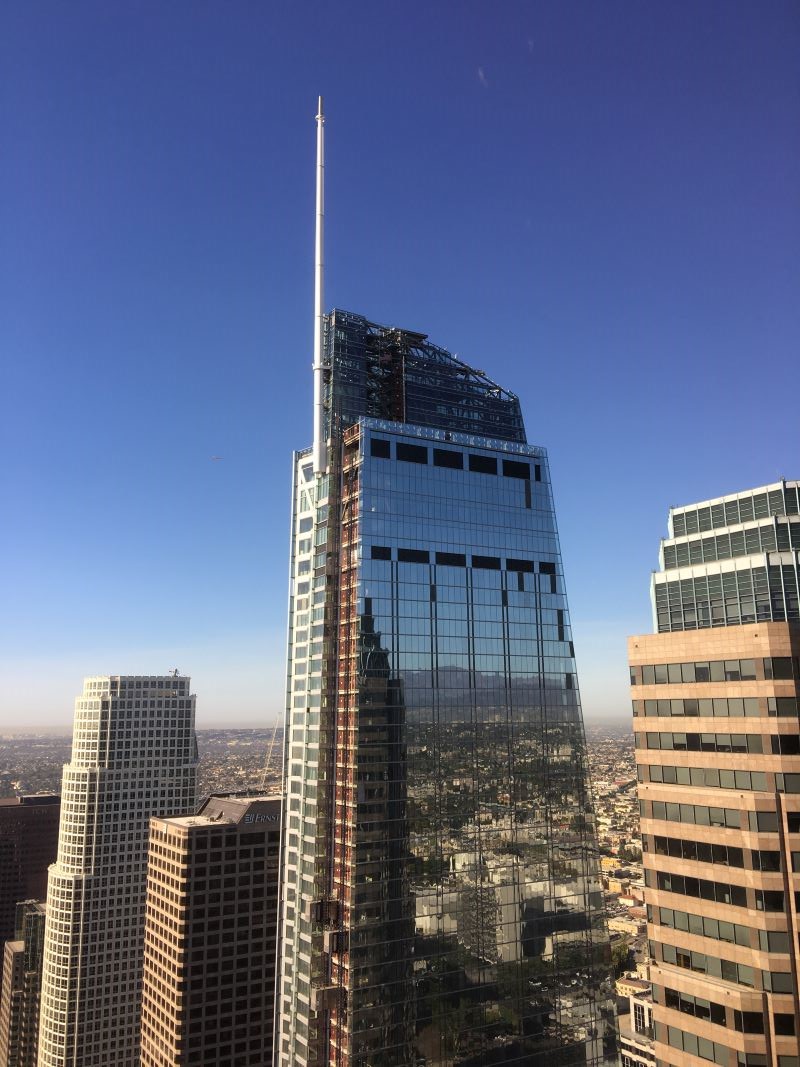 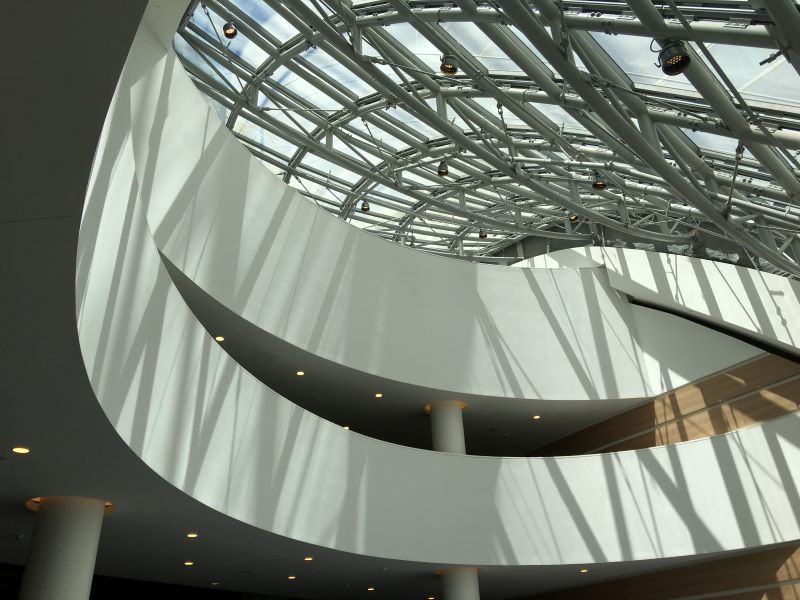 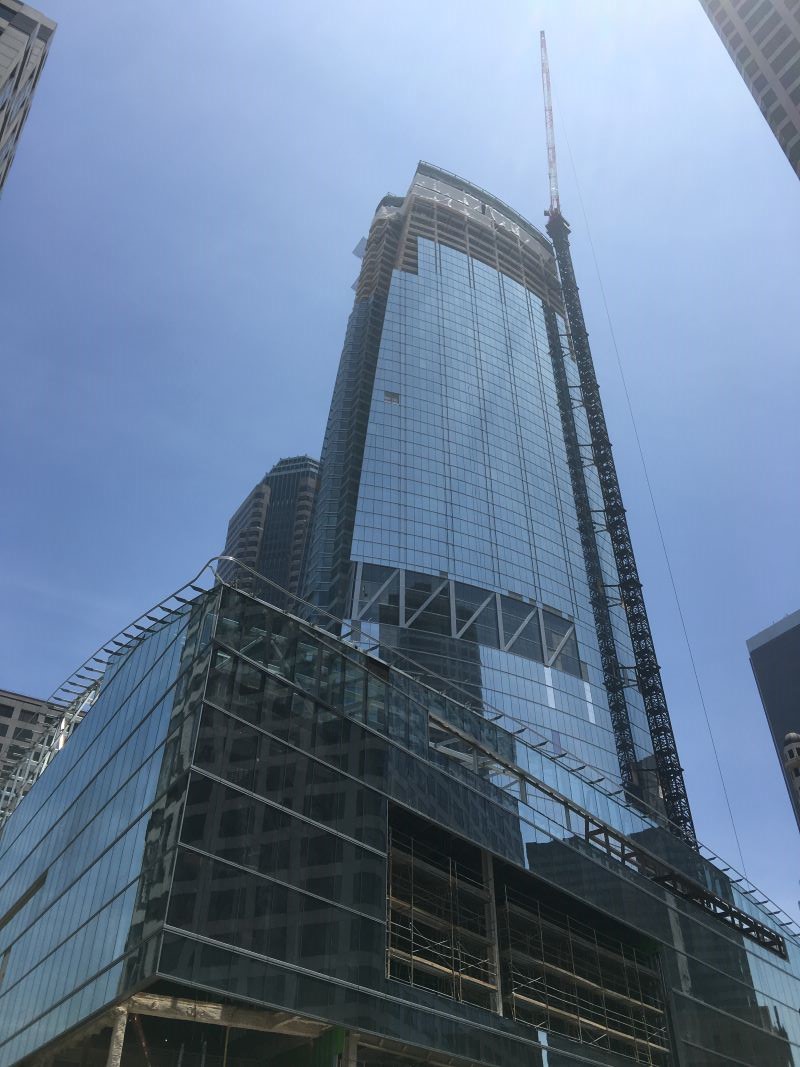 The exposed steel at the top of the building, as well as the curvature of the steel down in the lobby area, is really exciting and provides a great interaction with the public that’s using that space. —2020 IDEAS² Judge Sheryl Van Anne

Wilshire Grand Center is the best in the west.

The 73-story steel-framed tower in downtown Los Angeles is the tallest building west of Chicago and the tallest building in the United States outside of that city and New York. Built for a cost of $1.3 billion, the tower and its podium structure comprise approximately two million sq. ft of space. The upper 43 stories house a 900-room InterContinental Hotel—whose lobby is on the top floor—and the lower 30 stories are reserved for office space. A five-level subterranean parking structure provides space for approximately 1,000 vehicles.

The structural steel-framed tower is geometrically complex, with many of the steel columns sloping over their height to accommodate the curved edges of the structure. Between the 28th and 30th floors, the exterior building columns slope inward 6 ft over three floors to transition the floor plate configuration from office to hotel space. The tower’s columns are embedded the full depth of the 18-ft-thick concrete mat foundation to anchor seismic uplift forces.

The design team implemented a performance-based design methodology to accommodate the owner’s desire for floor-to-ceiling glass in the hotel and office spaces. A code-prescribed lateral design would have required a perimeter lateral system on the structure in addition to the concrete core wall. This would have resulted in deep perimeter beams that would have either increased the floor-to-floor heights or reduced the heights of the perimeter windows—as well as increased construction time in order to add a perimeter moment frame.

The building is designed to be linearly elastic for a service-level earthquake with a 43-year return period, and for collapse prevention for the extremely rare 2,475-year return period earthquake. To achieve this performance, the design team created three buckling-restrained brace (BRB) regions over the height of the structure. A total of 180 BRBs distribute lateral overturning forces to the exterior concrete-filled steel box columns.

At the top of the structure are ten 2,200-kip BRBs extending from floors 70 to 73, and the single-pin connections for these braces are exposed with a patina finish in the hotel lobby for all to see. Between floors 53 and 59 are 130 800-kip BRBs, with each spanning only one floor and hidden in the hotel room demising walls—a unique configuration that allowed the developer to maximize the hotel room count. Closer to the bottom of the structure, between floors 28 to 31, are 40 2,200-kip BRBs. Bundled in groups of four at ten locations, they span three floors and are capable of resisting 8,800 kips at each location.

The extensive system of BRBs is complemented by perimeter belt trusses around the exterior between levels 28 and 31 and levels 70 and 73. These elements all work together to provide torsional resistance and load path redundancy.

The five-story podium—which also employs structural steel framing, along with concrete shear walls—contains restaurants, retail space, meeting rooms, ballrooms, and a rooftop pool. The podium and tower are seismically separated over the building’s ground-floor lobby, which is covered by an undulating, curved glass roof that pays homage central California’s Merced River. Steel trusses made of round hollow structural section (HSS) members frame the roof and are rigidly attached to the podium at the tower with slip connections designed to move up to 15 in. in any direction.