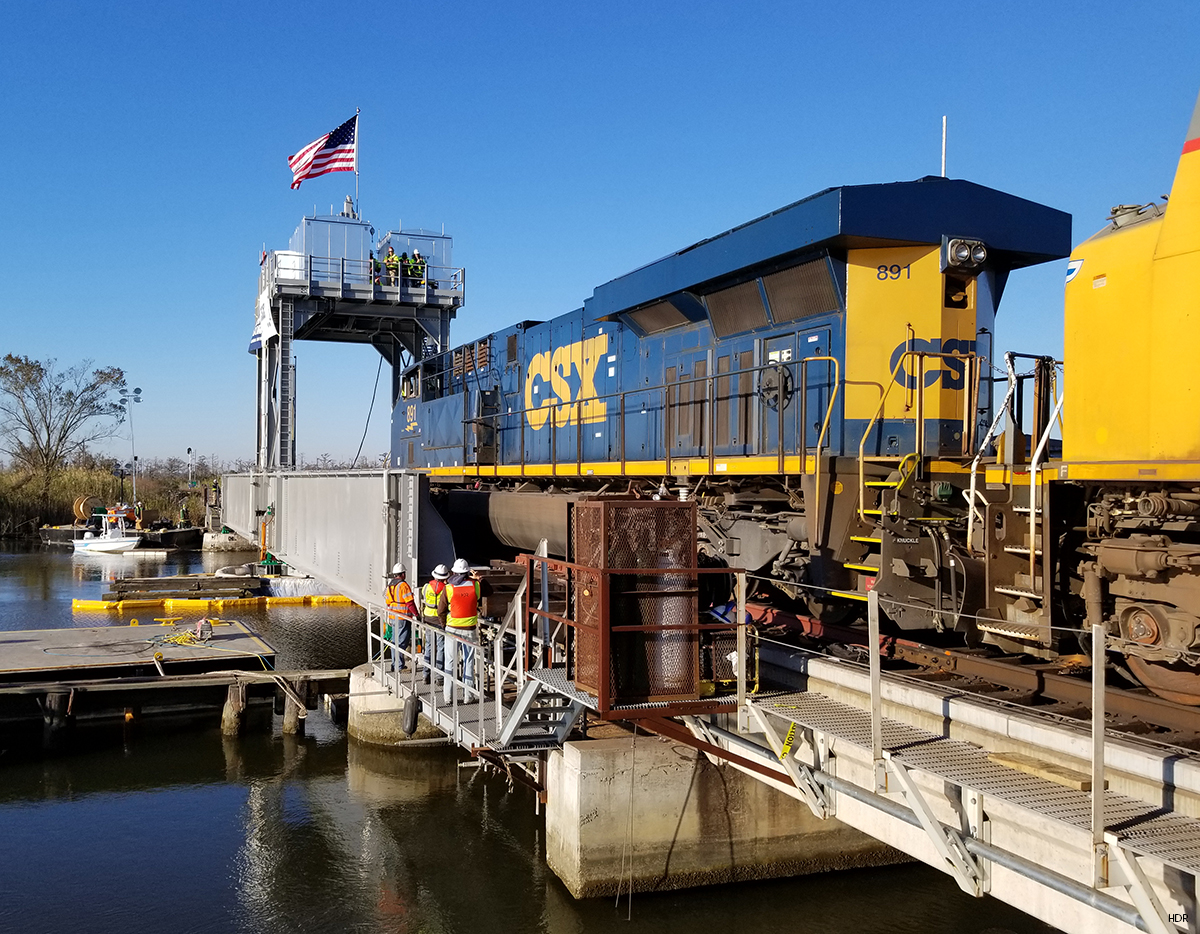 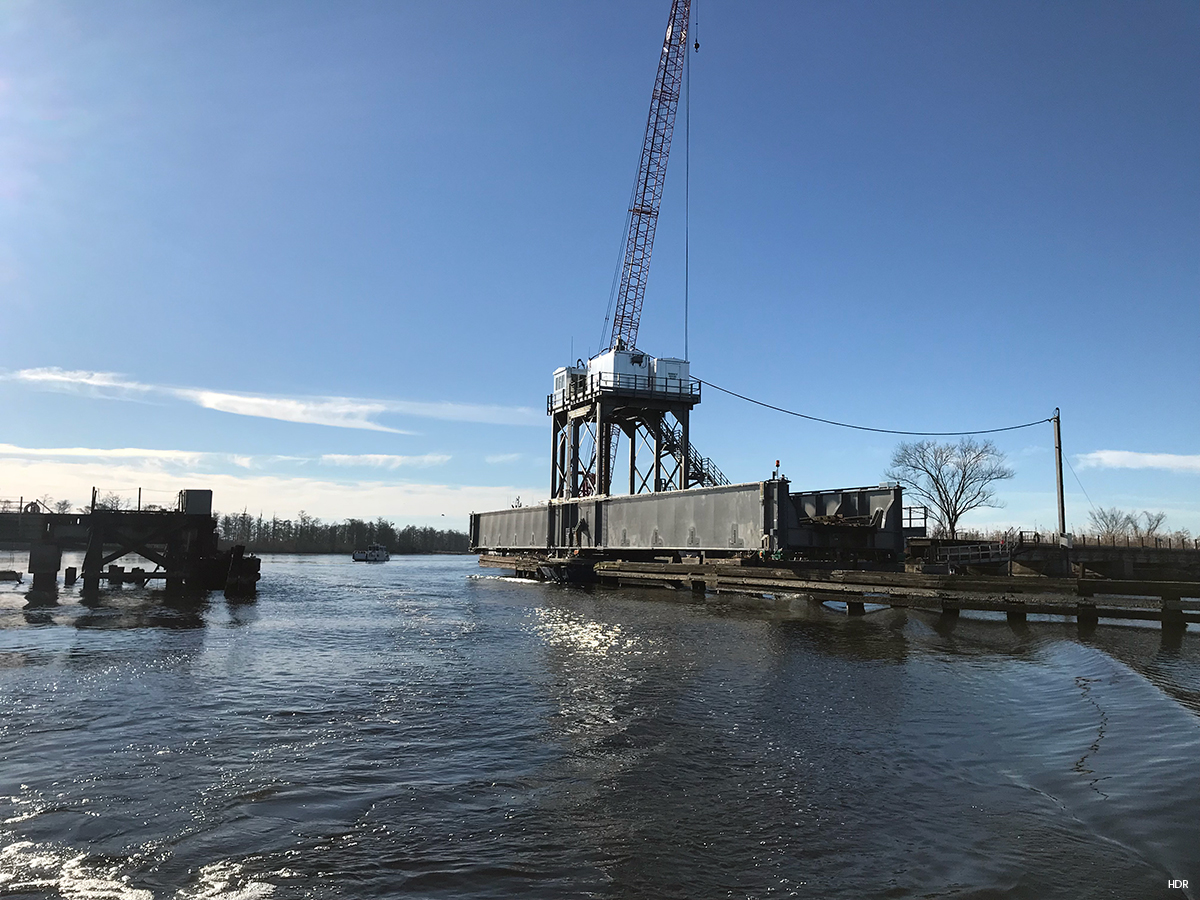 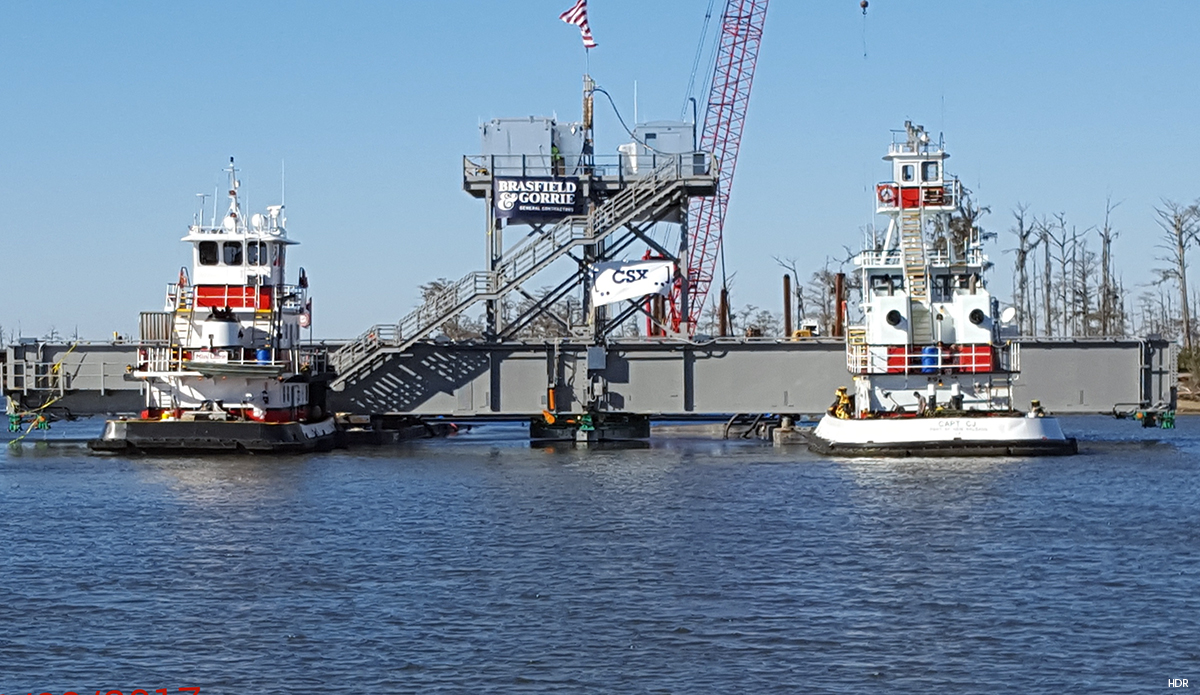 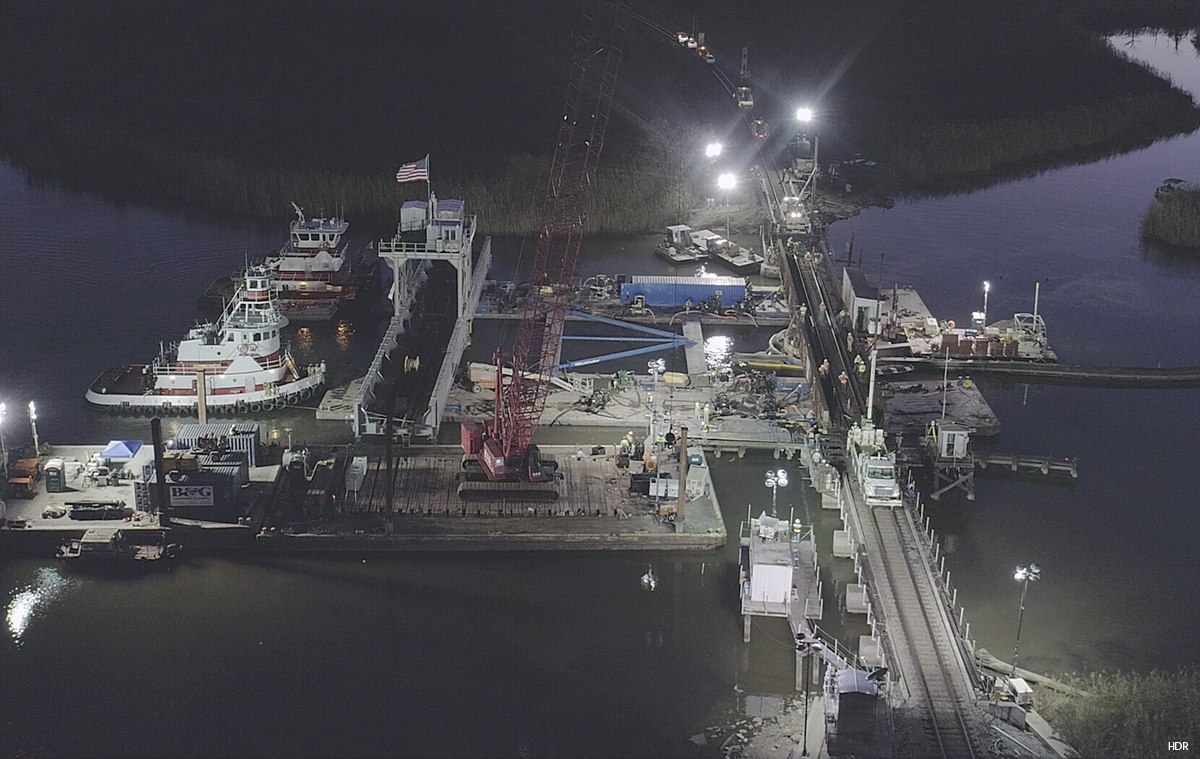 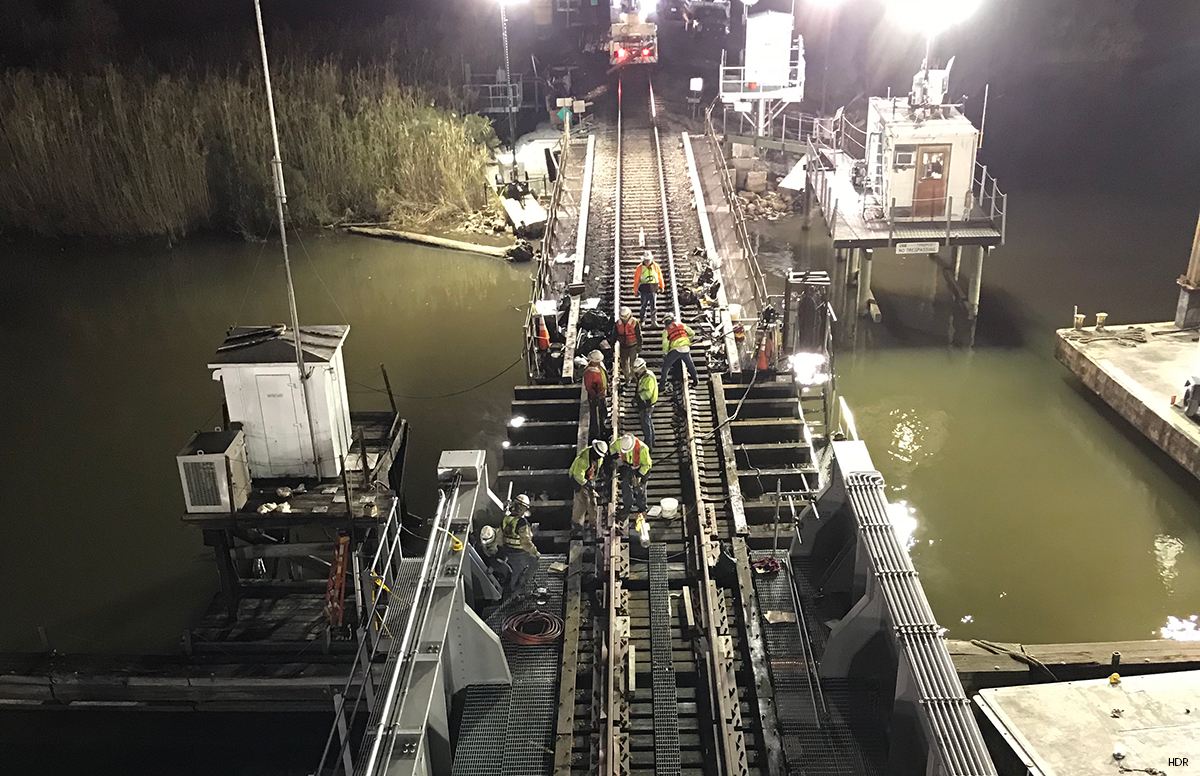 While the approach spans had been recently replaced, the swing span was over 90 years old and was scheduled to be replaced as part of a program to upgrade all of CSX’s movable bridges. To replace this critical link on the company’s Mobile Bay line, CSX turned to HDR to design a durable replacement with remote operation, minimized maintenance, and limited rail service interruption during construction. An in-kind replacement allowed the team to reuse the substructure, simplifying construction, speeding up the schedule, and reducing permitting requirements and track outages.

During hurricanes or lunar high tide, it was common for the water to rise above the bottom flange of the girders of the old bridge, inundating the bridge machinery with brackish coastal water. Because the bridge approaches could only be raised minimally, the replacement bridge incorporated features that mitigated the effects of high water inundating the lower part of the bridge.

The team placed the electrical components, hydraulic eqipment, and control systems on a gantry 28 ft above the track to remain above the water even during the worst of storms. An outboard walkway and stairway provide access to the platform, away from the track. In addition to improved security and environmental resilience, the platform allowed the team to rebalance a crucial counterweight.

The mass of a swing span must be balanced for proper operation. The control houses for many swing spans, including the old Bayou Sara Bridge, are mounted to a platform along the span edge, near the pivot. This requires a counterweight on the opposite girder to transversely balance the span. Adding the platform to the design allowed the team to reduce the counterweight steel by 20 tons.

Given the challenges, collaboration was critical to project success. The decision to proceed with the grillage concept was ultimately made in September 2017, just two months prior to the target float-in date. This limited the schedule for detailed design, procurement, fabrication, and assembly. When the grillage concept was first discussed, general contractor Brasfield and Gorrie immediately contacted the steel fabricator, Steward Machine, to discuss constructability and material availability. Steward provided feedback on available structural shapes, which were approved. This collaborative effort expedited shop drawing development and engineering review, which was crucial to procuring the grillage in time for installation prior to the float-in.

From the beginning of the project, CSX’s freight rail operations team allowed a 48-hour rail outage, which is a challenging window for removing a movable bridge span and installing a new one. During the construction phase, the team developed a plan to swap out the spans within this time frame, using a precast concrete pier cap to simplify construction and replace the deteriorated concrete cap.

However, as the planned outage drew near, CSX asked if the outage could be reduced so as to avoid delaying trains. The team considered several options, including temporary piles, which would have added significant costs to the project. In the end, the collaborative efforts between the owner, contractor, and engineering teams concluded that the most cost-effective solution was a structural steel support frame (grillage) suspended from the new swing span with pre-mounted rack, wedges, and pivot bearings. This steel grillage took the place of the top portion of the pivot pier, which was removed during construction. The grillage allowed the bridge machinery and bearings to be aligned and locked in their final position prior to float-in. It also provided support for all dead and live loads applied to the pivot pier, permitting rail traffic to pass almost immediately after the span float-in. The outage for marine navigation was longer than for railway traffic. This gave the team time to cast the surrounding concrete in place after the float-in phase, prior to operating the swing span.

Careful planning and pre-work paid off in the form of an accelerated swap-out of the swing spans, reducing the required track outage to only 14 hours.