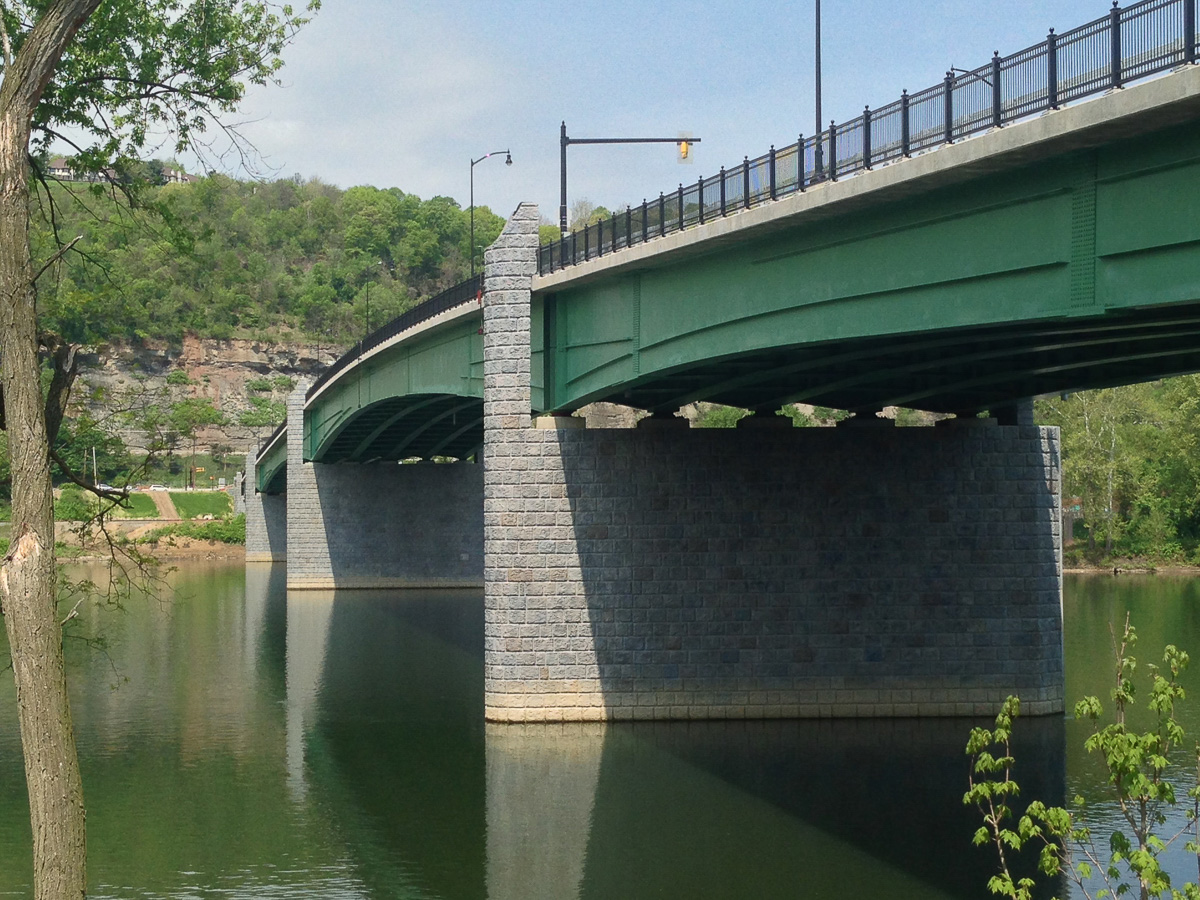 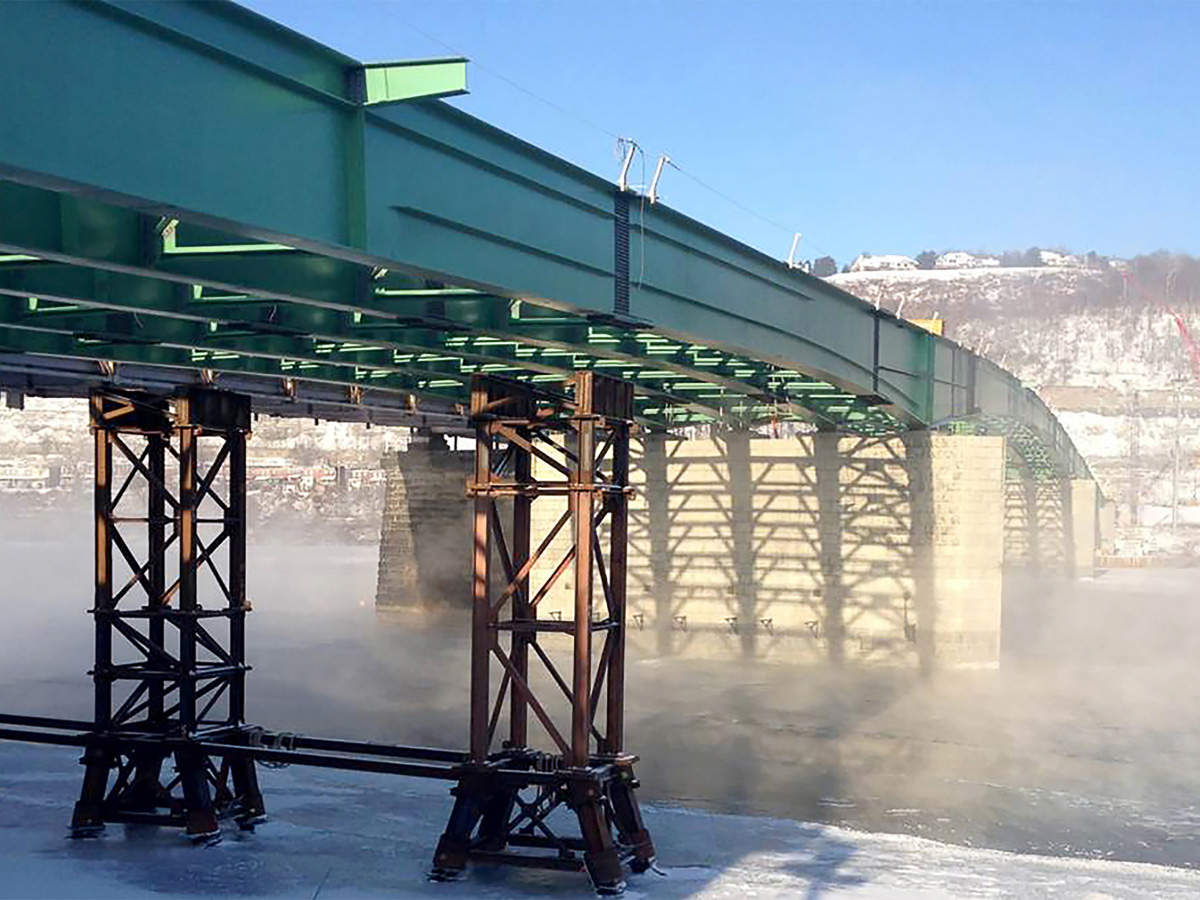 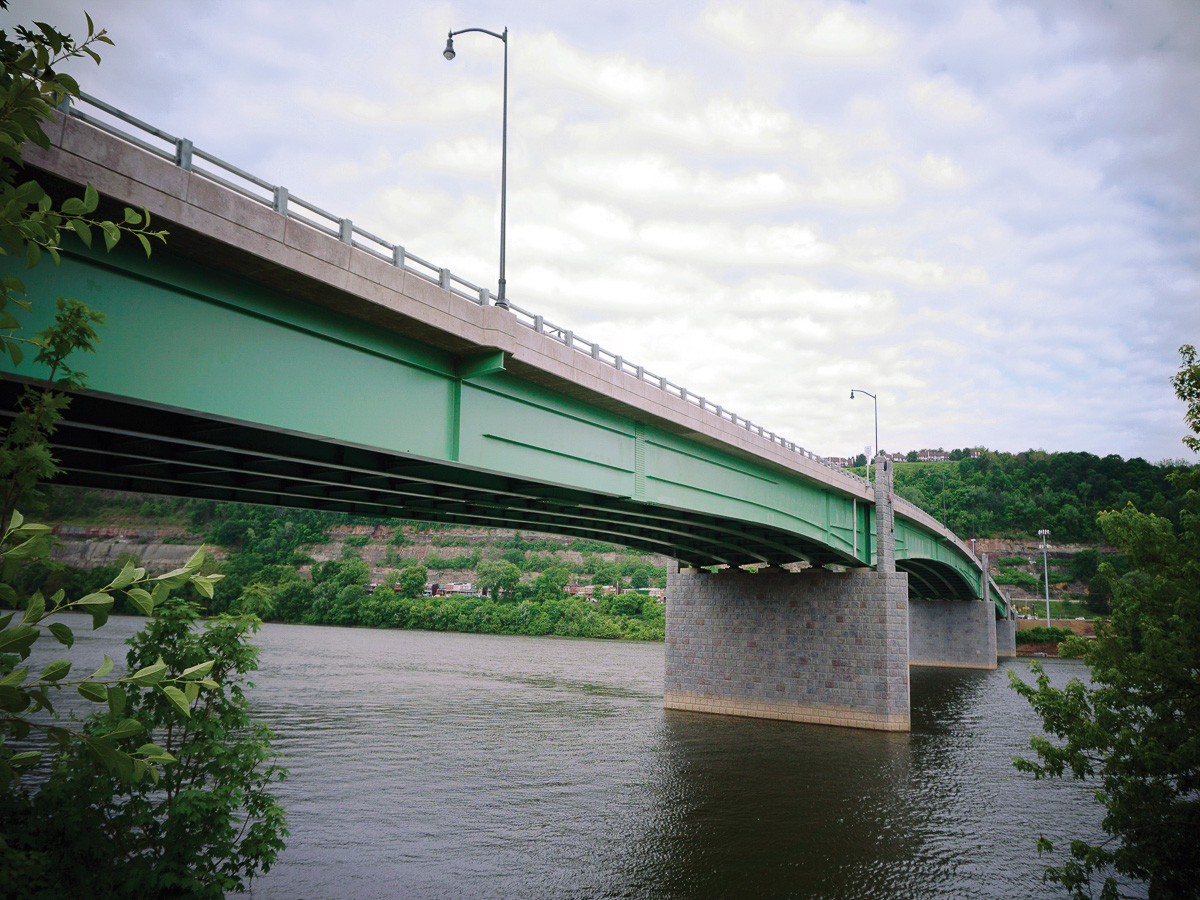 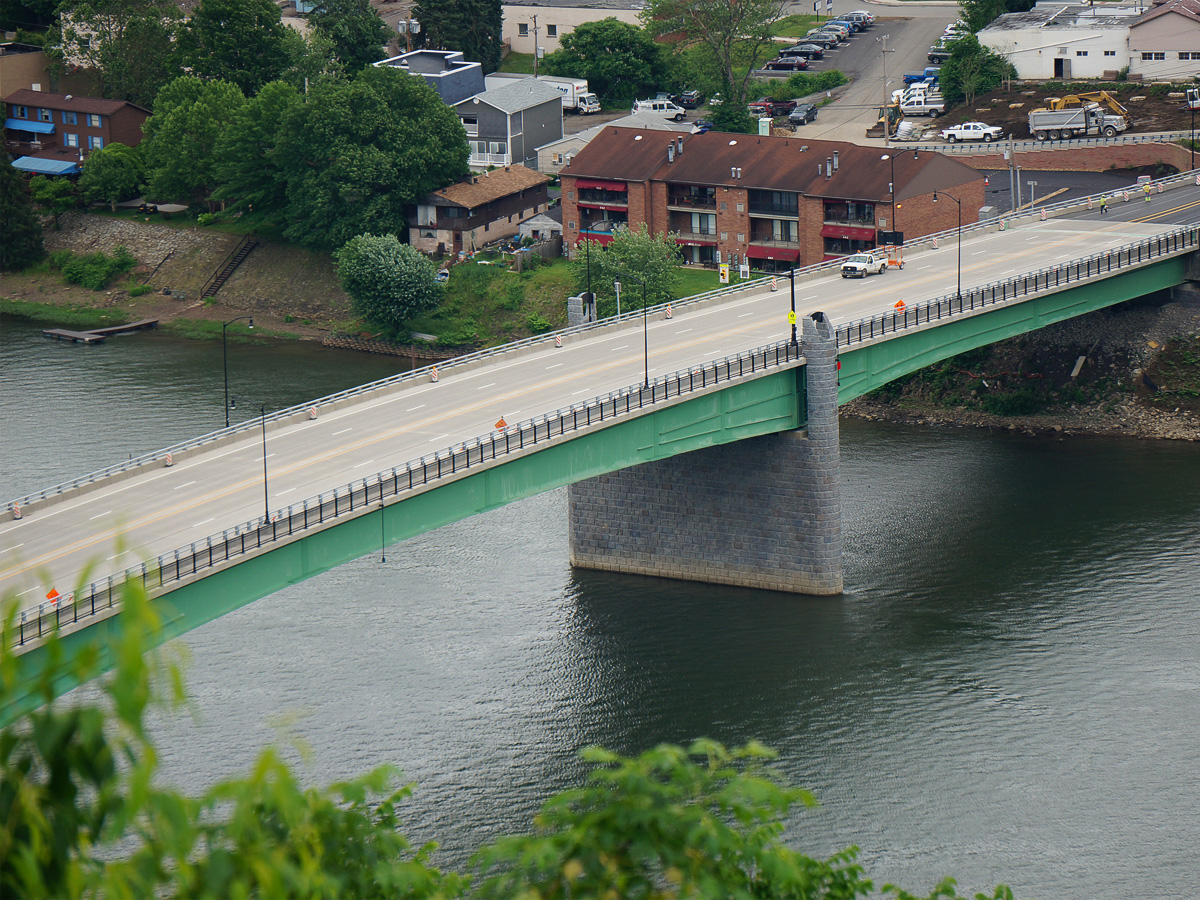 "The bridge is proportioned so well it masks the fact that the main span is 500 ft long. Coupled with an innovative strand jacking method of main-span construction, steel bridges again show their flexibility to adapt to any site," said Frank Russo PE, PhD, Michael Baker International, a judge in the competition.

The new bridge consists of a 100-ft single span over the Norfolk Southern Railroad and a four-span continuous section over the Allegheny River with span lengths of 274 ft, 479 ft, 500 ft and 275 ft. The railroad span was supported on a splayed substructure configuration to accommodate both the alignment of the railroad and skew of the river. This geometry required varying beam lengths for the eight constant-depth steel girders. The four-span superstructure was comprised of five haunched steel girder lines with varying web depths from 9 ft at the end supports to a maximum of 20 ft over the piers. The five girder lines spaced nearly 15 ft apart allow for four traffic lanes on the new structure compared to the existing two-lane bridge. The girders used a hybrid configuration by incorporating both 50-ksi steel and high-performance 70-ksi steel to optimize the design. Due to girder depths in excess of 14 ft, horizontal splices were designed and detailed to facilitate fabrication, delivery and erection. Additionally, longitudinal stiffeners were used to minimize web plate thickness for material efficiency. Top chord lateral bracing was provided between fascia and first interior girders to accommodate wind loading during construction.

Preliminary studies considered five potential crossing locations covering a 3.5-mile stretch of the Allegheny River from Blawnox, Pa., to the State Route 910 interchange with State Route 28. The best solution to maintain the existing roadway network and connectivity across the Allegheny River was a new structure just upstream of the existing bridge on a skewed alignment from the original structure. The skewed configuration allowed the entire bridge superstructure to be constructed in one phase, which optimized the construction duration and minimized impacts to right-of-way and utilities.

Because of commercial traffic on the Allegheny River, the U.S. Coast Guard prohibited using temporary towers in the navigational channel and limited the channel closure to a maximum of 72 hours. The restrictions required an innovative approach to erect the 1,200 ton, 280-ft-long, 60-ft-wide closure section of the steel superstructure over the channel in less than three days. To meet this challenge, engineer Gannett Fleming proposed a strand jacking erection technique that had never before been used by the Pennsylvania Department of Transportation (PennDOT) on a steel girder bridge. (Strand jacks are hydraulic devices that use multiple steel cables, or strands, to lift large loads.) Lifting the navigational channel span into place required four 600-ton capacity strand jacks. The five-girder system was preassembled on barges and floated into place the night before the lift. At 10:00 a.m. the following day, the strand jacks, each using 36 ¾-in.-diameter strands, began lifting the span into place inches at a time. The segment was raised approximately 50 ft to its final elevation at 6:00 p.m. Once in final position, girders were secured so that the strand jacks could be removed and the channel reopened.

To safely open the navigational channel, 25% of the girders' 10,000 field splice bolts needed to be in place and fully torqued, and 50% were required to release and remove the strand jacks. All five girders were erected simultaneously, with only a 48-hour channel closure.