CHICAGO - The American Institute of Steel Construction has awarded its 2022 T.R. Higgins Lectureship Award to Amit Kanvinde, PhD, professor of civil and environmental engineering at the College of Engineering at University of California, Davis.

Kanvinde will present “Column Base Connections: Research, Design, and a Look to the Future” as a keynote speaker during NASCC: The Steel Conference, which will take place March 23-25, 2022 in Denver. Kanvinde will share his findings from 15 years of research into the behavior, design, and structural interactions of various types of connections, including exposed, slab-overtopped, and embedded connections. The lecture will include prospective developments in base connection design, as well as insight into a revision of the AISC Design Guide 1: Base Plate and Anchor Rod Design.

In addition to his contributions to the understanding of fixed column bases, Kanvinde is a member of AISC’s Connection Prequalification Review Panel (CPRP) and the Committee on Research as well as an ad hoc committee on box columns. In 2017, AISC awarded Kanvinde a Special Achievement Award for his research on column connection details including requirements for column splices.

“The Higgins award is well-deserved, not only because of his unique contributions to the field of steel column bases, but also because he has made several significant contributions to our understanding of steel structures in his career so far,” Eatherton said. 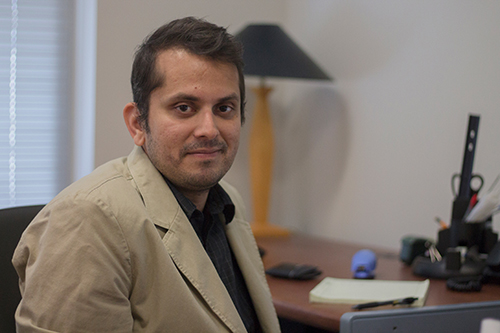 Amit Kanvinde received his Bachelor of Science in civil engineering from IIT-Bombay (1999), and his master’s (2000) and doctorate (2004) from Stanford University. He is a professor in (and formerly the Chair of) the department of civil and environmental engineering at the University of California, Davis.

Kanvinde’s research is focused on the seismic response of steel structures and connections. His work with AISC includes research on column base connections, column splices, and fillet welds, and has been cited in standards including AISC 341 (Seismic Provisions for Structural Steel Buildings) and the forthcoming AISC 342 (Seismic Provisions for Evaluation and Retrofit of Existing Structural Steel Buildings). He currently serves on the AISC Connection Prequalification Review Panel (CPRP) and the Committee on Research, as well as an ad hoc committee on box columns. He previously received AISC’s Special Achievement Award (2017) and the Norman Medal (2008), Walter Huber Research Prize (2016), and the State of the Art of Civil Engineering Award (2018), all from the American Society of Civil Engineers.