(Chicago, IL) – The Pterodactyl Office in Culver City, Calif., has earned national recognition in the 2017 Innovative Design in Engineering and Architecture with Structural Steel awards program (IDEAS2). In honor of this achievement, members of the project team will be presented with awards from the American Institute of Steel Construction (AISC) during a ceremony to take place at the building on Monday, August 14, at 5 p.m.

“Pterodactyl appears almost as a living creature,” commented Ben Varela, SE, PE, founding principal at WORKPOINT engineering, and the structural engineer juror in the competition. “The design overcame the inherent limitations of supporting the new building over the existing parking structure layout.”

This angular office building was constructed right on top— and hanging over the side—of an existing four-story steel-framed parking garage. And a number of the existing columns are cantilevered beyond the top of the parking structure to provide support for the mezzanine and roof superstructure. Structurally, the building is made up of a series of nine rotated “boxes” that provide just enough space at the corners and at their intersections to efficiently house the elements of the structure.

The IDEAS2 award dates back more than 50 years with AISC. And about this year’s winning office building, Charlie Carter, SE, PE, PhD, president of AISC, said, “It would be hard to imagine a better demonstration of how steel as a material, imaginative architectural and structural design, and construction skill can come together to create a unique opportunity. This project is further proof that there’s always a solution in steel!” 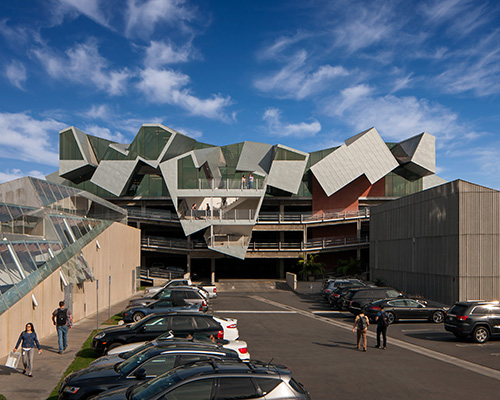