(Chicago, IL) – The Samsung Americas Headquarters (Device Solutions) in San Jose, Calif., has earned national recognition in the 2017 Innovative Design in Engineering and Architecture with Structural Steel awards program (IDEAS2). In honor of this achievement, members of the project team will be presented with awards from the American Institute of Steel Construction (AISC) during a ceremony to take place at the building on Wednesday, August 9, at 11:45 a.m.

“The grand, floating tiers are engineering wonders that elevate the building to a future time,” commented April Y. Wang, a structural engineering master’s student at Purdue University’s Bowen Laboratory, and the engineering student juror in the competition.

With no perimeter columns on the east and west sides, the 10-story tower appears to float at every third level and offers occupants unobstructed external views. The resulting spaces, and the atriums around them, are dedicated collaboration areas, facilitating casual meetings and breaks from the traditional work spaces.

The IDEAS2 award dates back more than 50 years with AISC. And about this year’s winning headquarters building, Charlie Carter, SE, PE, PhD, president of AISC, said, “This building is substantial yet light and graceful. It stands as a testament to the creativity and skill of its designers and constructors -- and the steel materials that made it work.” 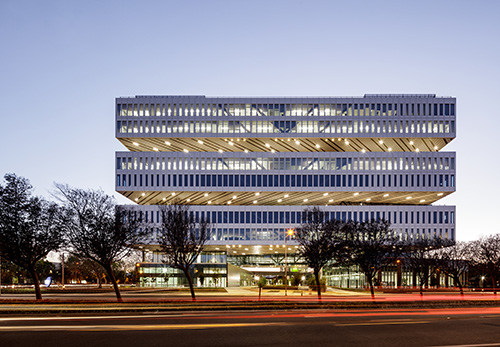