(Chicago, IL) – Southwest University Park baseball stadium in El Paso, Texas,has earned national recognition in the 2017 Innovative Design in Engineering and Architecture with Structural Steel awards program (IDEAS2). In honor of this achievement, members of the project team will be presented with awards from the American Institute of Steel Construction (AISC) during a ceremony to take place at the ballpark on Tuesday, August 15, before the first pitch of the game at 7:05 p.m.

“This ballpark takes me back in time. I really like the way it mixed the old style with new steel and technology,” commented Sam Boykin, vice president at SteelFab, Inc., Atlanta (an AISC member and certified fabricator), and the steel fabricator juror in the competition.

The IDEAS2 award dates back more than 50 years with AISC. And about this year’s winning ballpark, Charlie Carter, SE, PE, PhD, president of AISC, said, “The design and construction teams swung big with steel and the result is a grand slam. This ballpark makes the game more for all who play and watch in it.”

Members of the media may request high-resolution images of the project by contacting AISC’s Tasha O'Berski at 312.670.5439 or oberski@aisc.org. For more information about the IDEAS2 awards and to view all of this year’s winners, please visit www.aisc.org/ideas2. Entries for the 2018 competition are due by October 6, 2017. 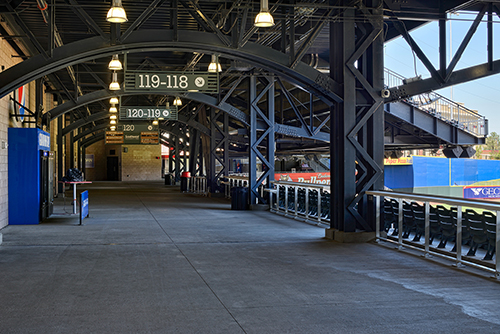