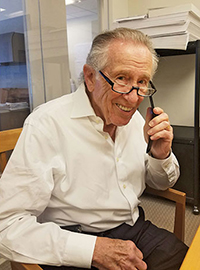 Cantor's career spanned more than six decades. During that time, he built an international structural engineering firm—initially named the Office of Irwin G. Cantor in 1971 and renamed the Cantor Seinuk Group (CSG) in 1992—which was responsible for numerous prominent high-rise structures in Manhattan and around the world. After he retired from the firm, he continued to be involved with the engineering profession through his work for the New York City Planning Commission, serving as commissioner for 20 years and also providing in-house consulting for Tishman Speyer in New York. He was the main force behind New York City’s first seismic building code, which went into effect in 1995, and the city’s peer-review rules, in addition to serving as structural committee co-chair. Over his career, he received numerous awards, including the AISC Lifetime Achievement Award in 2009.

Cantor graduated from the City College of New York with a bachelor’s in civil engineering and was an Air Force Veteran. He was also active in and recognized by Jewish foundations and organizations, and he and his wife, Gloria, were founding members of the Bay Terrace Jewish Center in 1955.

Cantor is survived by Gloria, three daughters and three grandchildren.