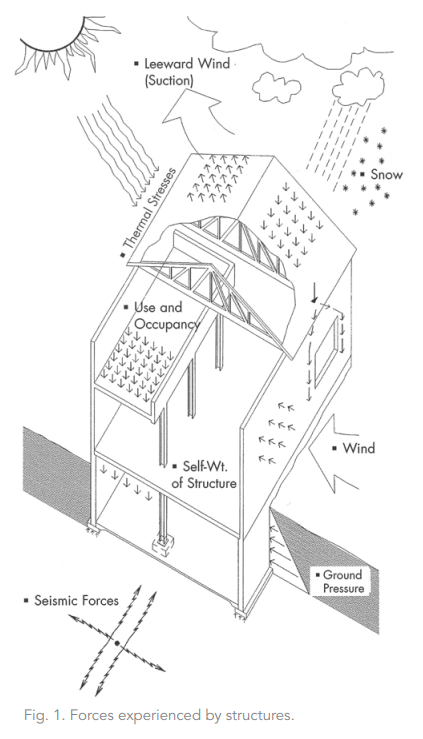 All structures are subjected to natural forces, such as wind, gravity, and seismic events. The question is, which natural forces will affect a building, and to what extent? The structural engineer will use that information to choose members that have the right strength and serviceability characteristics to plan how the structure will transfer each type of load to the ground. 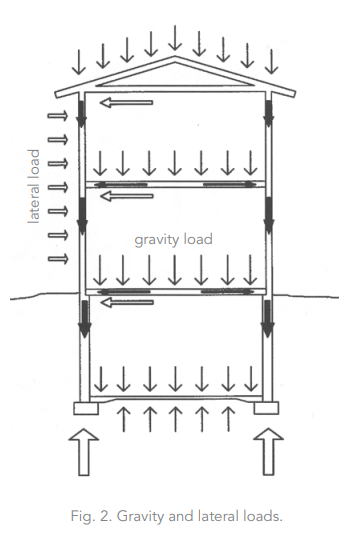 Engineers consider two different types of forces that are related to gravity.

"Dead" loads comprise the weight of the structure itself as well as things like mechanical equipment, ceiling and floor finishes, cladding, façades, and parapets. The dead load is essentially the amount of consistent weight that a building must support at all times.

"Live" loads account for things that are more transient in nature, like the weight of people moving around in the building, snow atop the structure or interior furnishings.

The floor decking and roof sheathing distribute the load to uniformly spaced beams. Girders span from column to column and support the ends of those beams. Those girders may end up supporting other girders, as well, before transferring the force to structural columns which then carry the vertical load to the foundation elements below.

Wind exerts varying forces across the building’s façade, and the primary lateral load-resisting system must meet code requirements to handle those forces.

Wind pressures act directly on the windward side of a building, but they also create a pulling or suction force on the leeward side. This means that the exterior of the entire building must be able to resist both inward and outward pressure.

In addition, wind can create an upward or suction pressure on roofs made of lightweight material. For instance, a roof consisting of metal decking, thin insulation, and a membrane roof material without ballast may encounter a net upward force.

Roof shape (gable, sawtooth, etc.) may influence net uplift pressures from wind. Curved roofs can actually experience both upward and downward pressure simultaneously as the wind pushes down on the top part of the curve and pulls up from the lower part of the curve. This distribution of downward and upward pressures is similar the principles of air pressure and lift that act on an airplane wing.

The structure must transfer these wind-related forces properly. The façade should transfer the horizontal load to the adjacent floor or roof. From there, the floor and roof systems must have a means to distribute those horizontal forces to some kind of lateral load-resisting system such as diagonal bracing or shear walls.

Floors and roofs that are generally solid or without large openings may behave as diaphragms, which act as a single plane with the connecting beams, girders, and columns.

Picture a piece of cardboard held up by a series of vertical columns. When you push the cardboard horizontally, all of the columns connected to the board will move in unison. A typical floor slab is a rigid diaphragm, just like that piece of cardboard, and that lateral shift is precisely what happens when the diaphragm plane created by a roof or floor is laterally loaded. Horizontal diaphragms are an efficient way to transfer the horizontal loads at each level of a building to the lateral load-resisting systems.

Should a large opening such as an atrium, a skylight, or a raised floor interrupt the diaphragm, the lateral or horizontal loads may not flow easily to the lateral load-resisting systems. If that is the case for your project, the structural engineer may create an alternate diaphragm system such as a horizontal truss system that uses the floor beams and/or girders.

Earthquakes and other seismic events generally exert horizontal force on structures, but they can also occasionally create vertical force, too.

The weight of the various levels on a building have a direct impact on the forces that building experiences during a seismic event. Diaphragms come into play to transfer the horizontal forces to the structure's primary lateral load-resisting systems.

The building shape and the positioning of the lateral load-resisting systems can have a big impact on a structure's sensitivity to seismic forces. If your project is in an area with significant seismic activity, you may want to consider a very regular building plan to effectively handle these forces.