Structural Steel is Produced and Fabricated in America

Since the first skyscrapers in New York and Chicago dared to dance with the clouds, American-made fabricated structural steel has supported American workers, American businesses, and the American economy.

If the United States cannot fend off this onslaught of cheap subsidized foreign fabricated steel, tens of thousands of American jobs will be at risk, billions of dollars in domestic industrial investment will be lost, and we will be handing over the keys to our nation's critical infrastructure to foreign fabricators.

Our leaders in Washington must stand up for the hardworking Americans who rely on the fabricated steel industry to support their families. Help level the playing field and take swift and decisive action to keep those jobs in the United States before it's too late.

U.S. structural steel is made by American workers:

U.S. structural steel is a locally sourced and recycled material:

The Steel Solutions Center is for people who need technical assistance, innovative solutions, or tools to make structural steel design even easier. 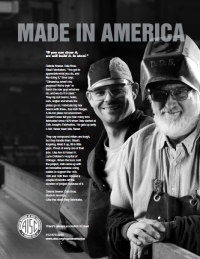