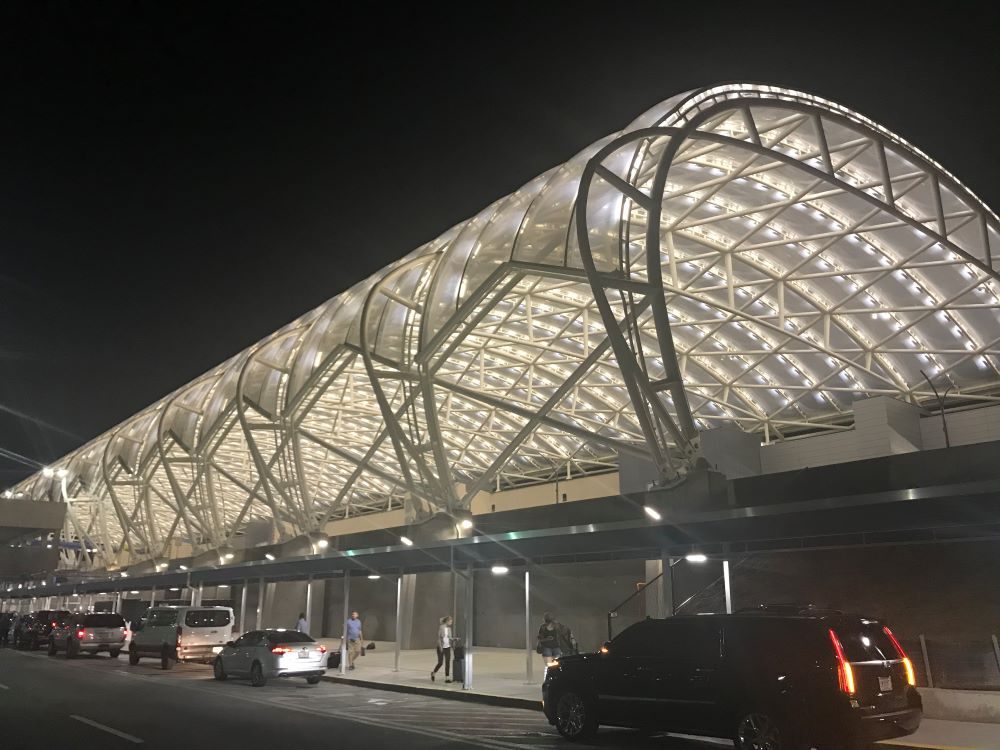 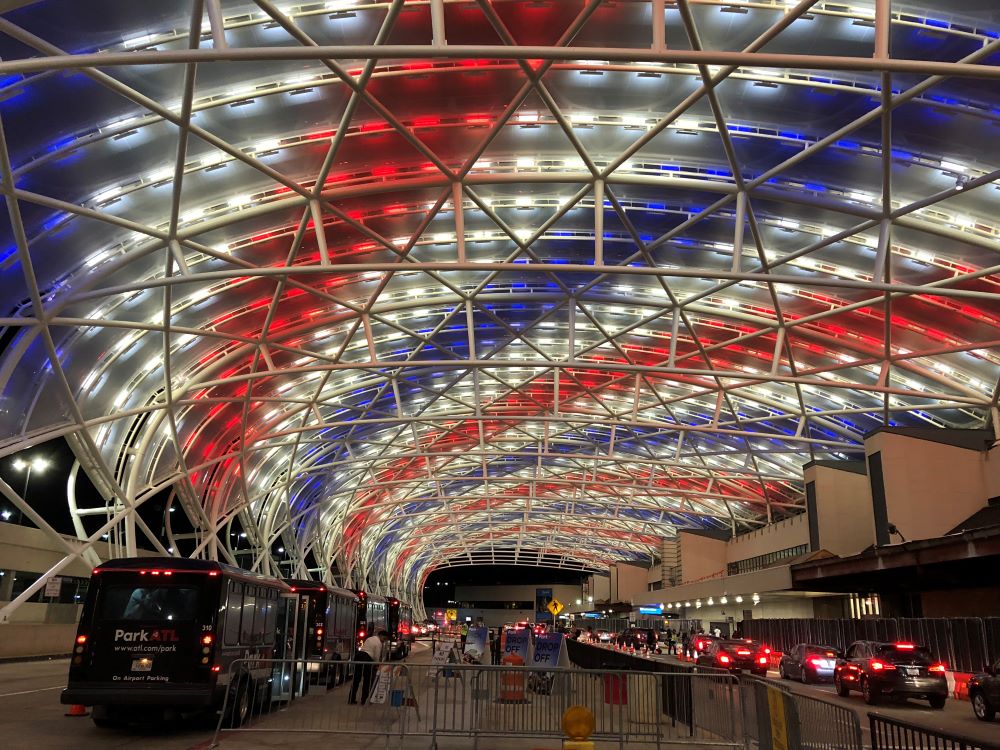 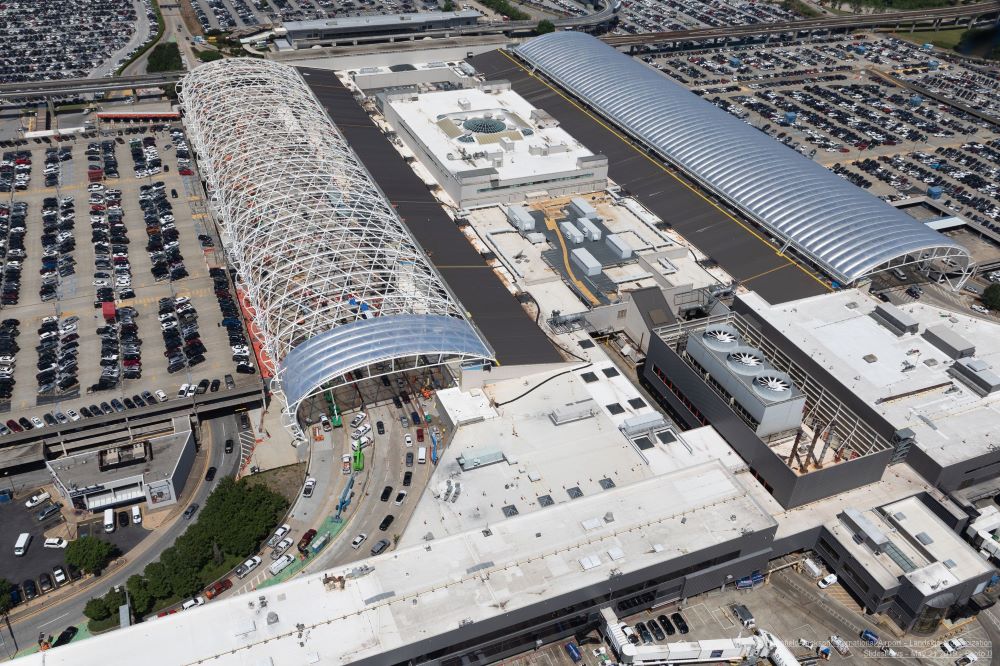 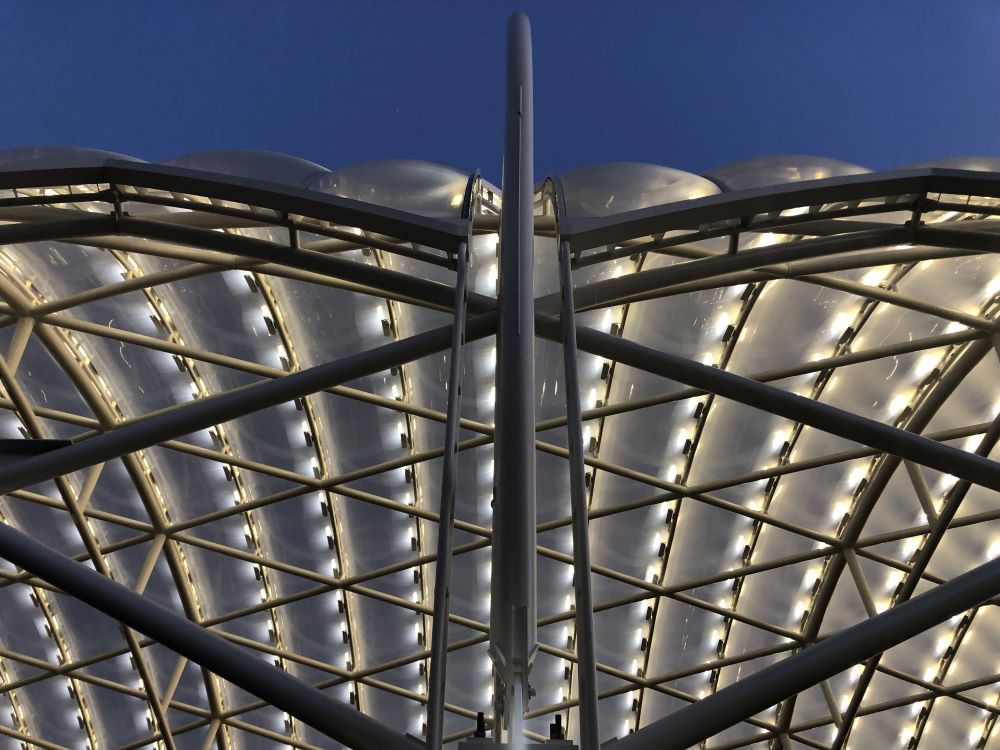 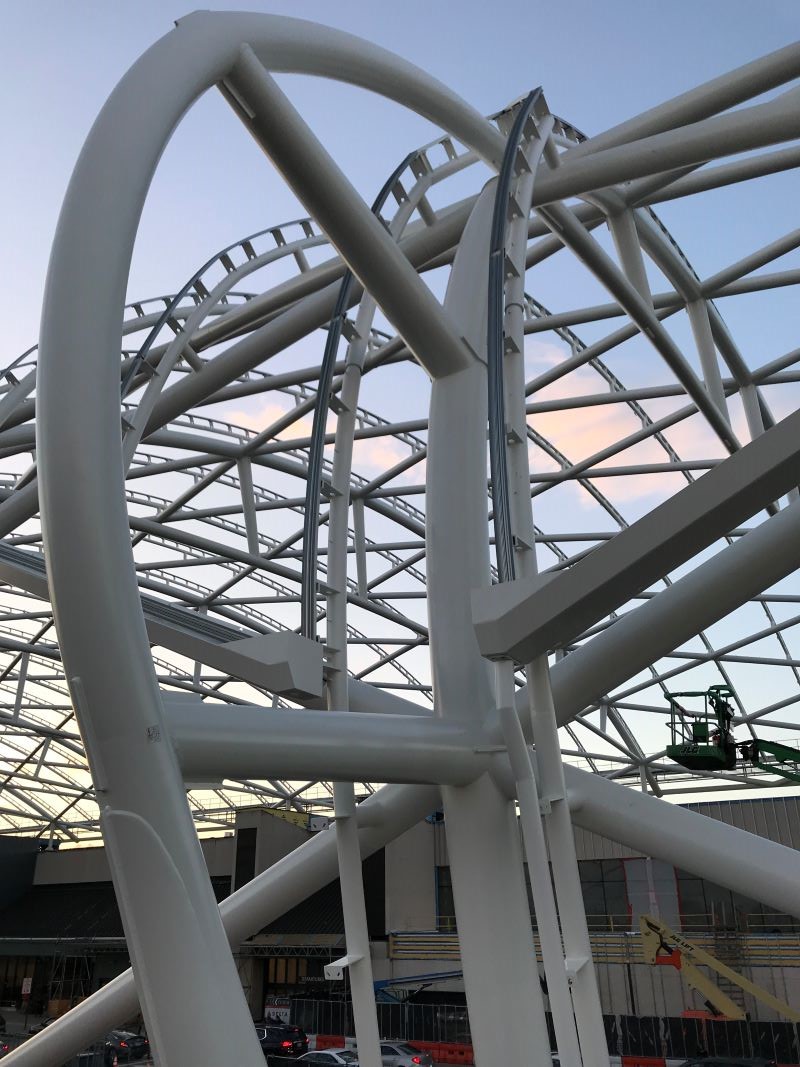 The project’s complex 3D modeling had to precisely plan each section component for quick construction, and the pieces had to be timed perfectly. —2020 IDEAS² Judge Kari Berg

Hartsfield-Jackson Atlanta International Airport (ATL), the busiest in the world, recently looked to transform its 40-year-old terminals by introducing a new architectural icon.

But a question emerged: How could ATL modernize without impacting ongoing operations and risking its title as the world’s most efficient airport? The airport’s planners initially envisioned fabric-covered steel canopies. However, they were structurally problematic as they required new support columns along the terminal curbs and foundations that would have been extremely disruptive to airport facilities located beneath the curbside.

The design team began examining how the canopy might connect to the terminal without the need for new columns at the terminal curb. Using STREAM software (developed by design firm HOK’s engineering group), which performs steel design and optimization, the team developed an alternative canopy design that distributed two-thirds of the structure’s load onto new support piers located near the parking garages, reducing the increased demand and associated retrofit work to the terminal columns by 75%. This process, which typically would have lasted several months, took only three weeks from start to final owner acceptance of the design.

The dual 864-ft-long canopies feature curved hollow structural section (HSS) steel Vierendeel trusses. The compression chords of the trusses are connected by a diagrid. The trusses span 174 ft and are supported along one edge by 10-ft-deep by 21-ft-tall concrete piers, and at the other edge on bearing pads atop the existing terminal columns. Both canopies support two pedestrian bridges that thread through the diagrids, connecting parking garages to the terminal. The sweeping form of the diagrid canopy represents the most efficient structural load path and is key to the canopy design. The diagrid transfers lateral forces to the piers, which are supported by micropiles, and the system provides sufficient elastic deformation to relieve the stresses associated with thermal movement of the structure. At the terminal-side supports, multidirectional slide bearings allow lateral movement of the canopy relative to the existing structure.

The canopies were optimized with fabrication and construction feasibility in mind. While the truss chords appear to have gradually varying curvature, they are actually made of discrete constant-curvature sections, which are significantly less expensive to fabricate. The design and construction teams worked together to design connections that allowed construction to progress in stages during the overnight road closure time period. The truss splice connections have internal bolts that were rapidly installed and concealed with welded cover plates afterward.

Throughout the project, the airport emphasized that construction of the canopies could not impact operational efficiency. This flipped the usual process on its head. Whereas in most cases logistics are secondary, in this case logistics drove the fabrication. The steel was detailed and sequenced to allow installation during limited roadway shutdowns between 10:00 p.m. and 4:00 a.m. The team used a 4D schedule to explain the sequence of construction associated with a 500-page logistics plan, and 3D printing and virtual reality applications were used to plan and monitor bearing movement during steel erection. This successful collaboration returned the active seven-lane road to service each morning without any delay throughout two years of construction.

The biggest fabrication challenge was controlling steel movement due to welding and temperature changes. Steel fabricator Beck’s fabrication of 38 identical trusses was successful thanks in large part to three key strategies. First, 50 tons of custom fixtures were built and welded to the floor to hold each truss’s position during fabrication. This was crucial because the steel would move during the day as the shop heated up and had to be frequently laser surveyed to monitor the geometry and adjust fabrication as needed. The second strategy involved cutting the HSS members with constantly varying miters that covered a range of 20° to 90° in a single pipe to minimize the amount of required weld material. Beck effectively had to “trick” the CNC machine’s software to make some of these cuts. The alternative would have resulted in two or three times as much welding, which would have exacerbated steel distortion, and providing perfect cuts every time was critical to minimize welds and achieve identical behavior for each truss. And the third strategy? Weld everything flat. Rather than welding around the pipe, Beck kept the welding stationary in a flat position and rotated the steel, performing every weld identically on each truss assembly. This fabrication process involved trial and error but ultimately proved very successful.