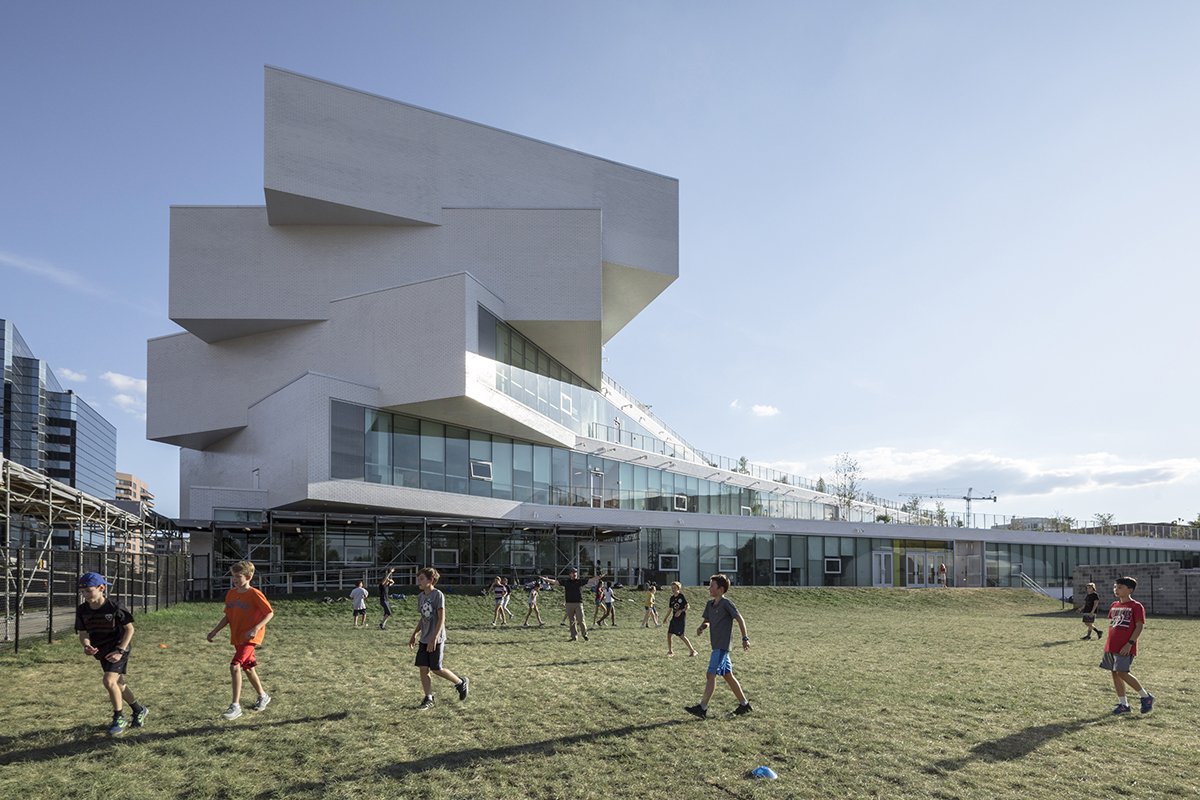 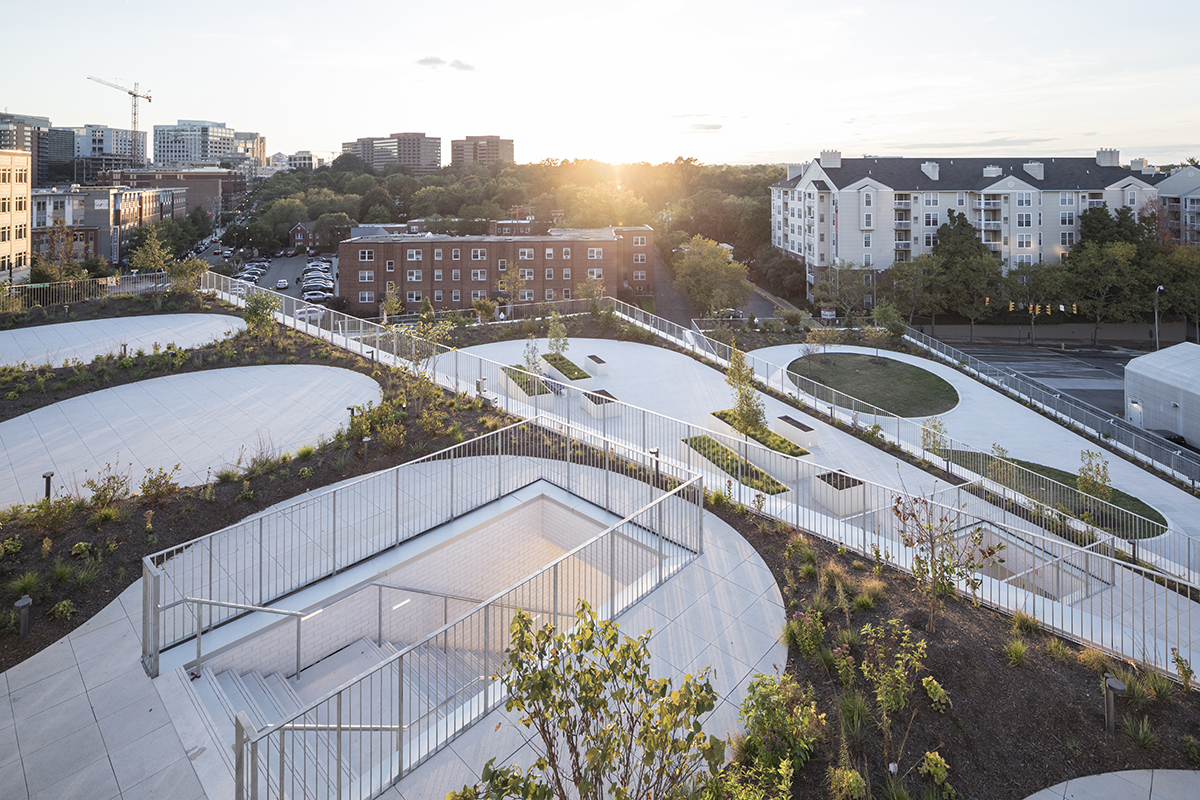 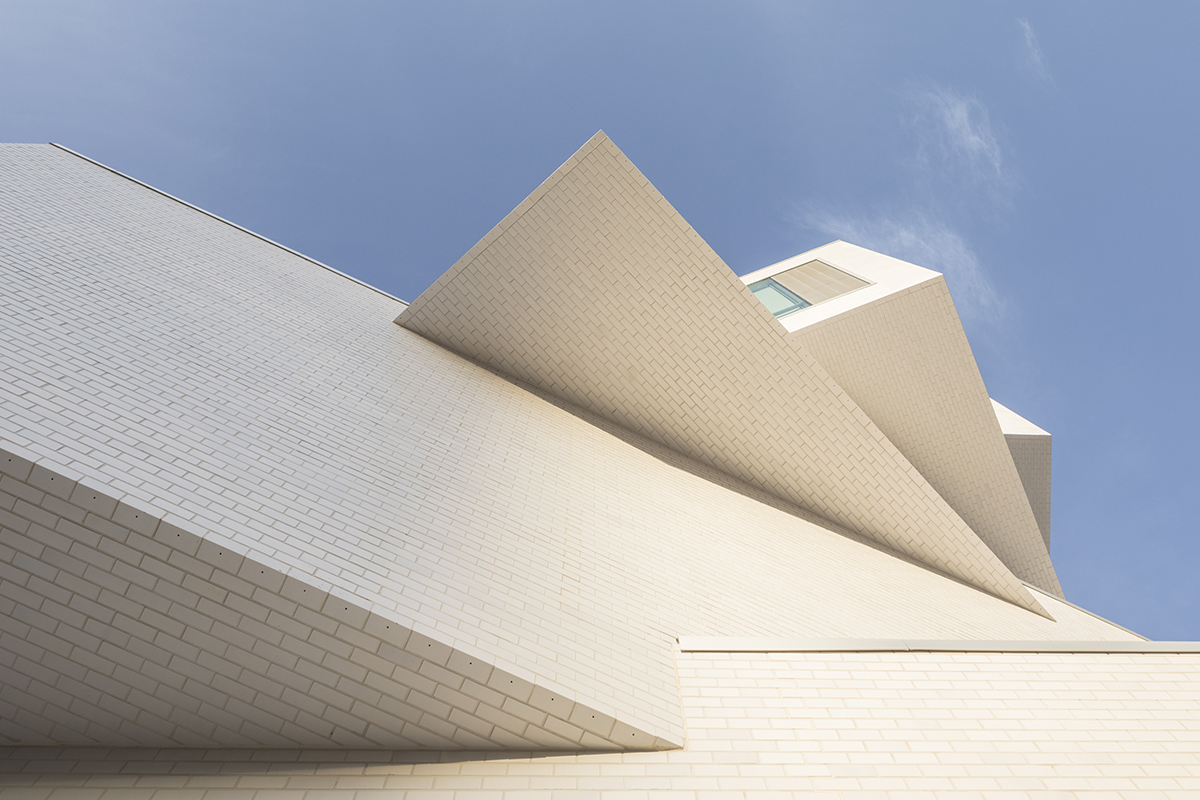 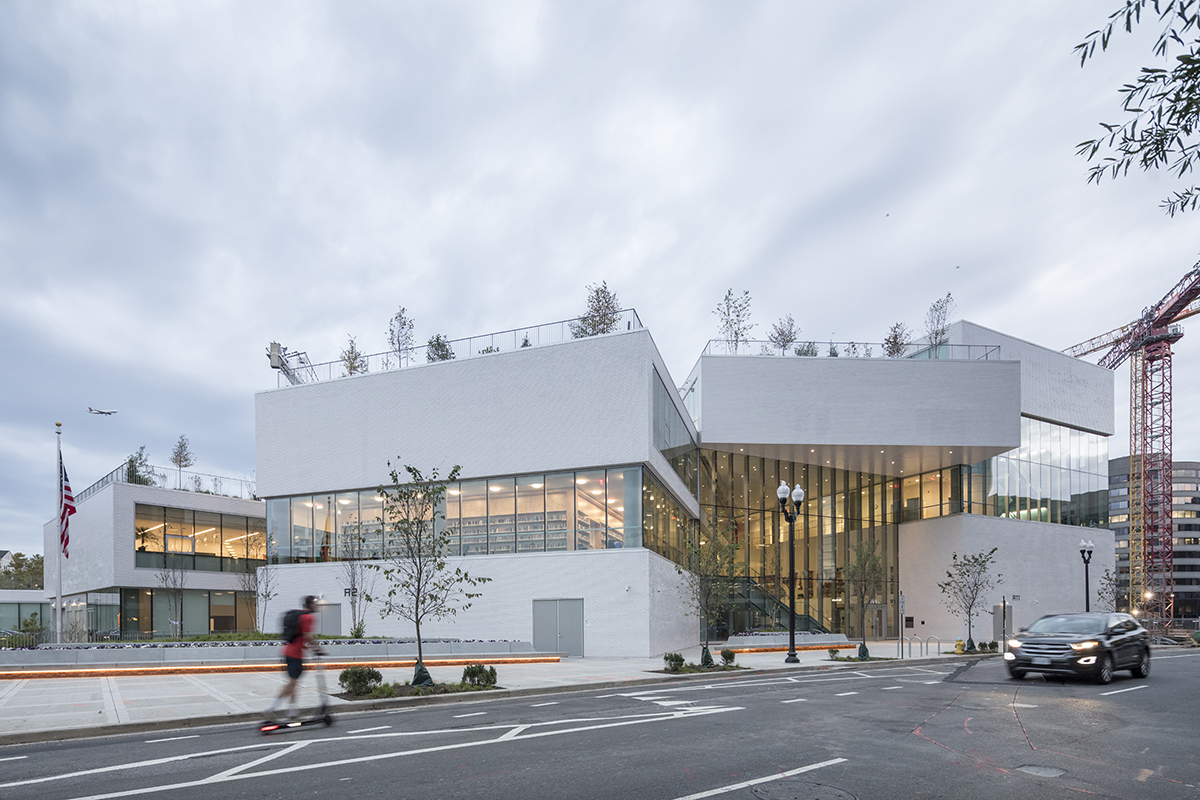 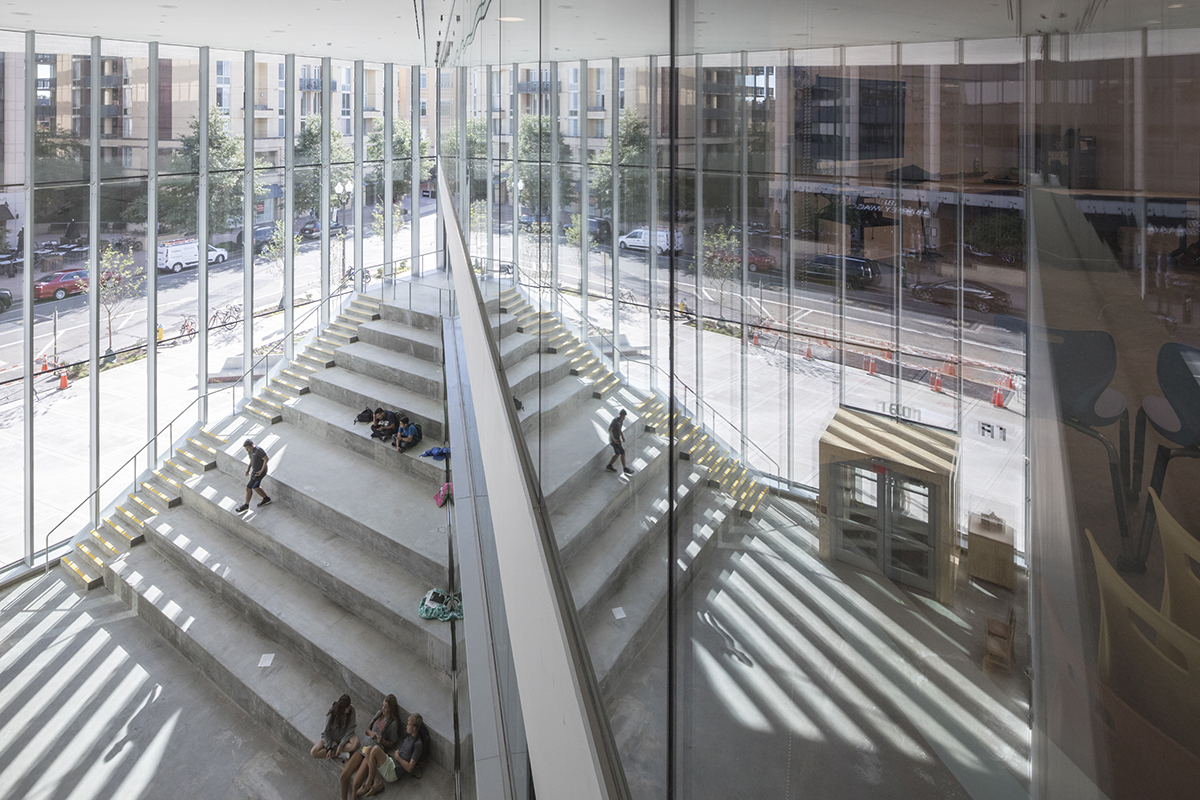 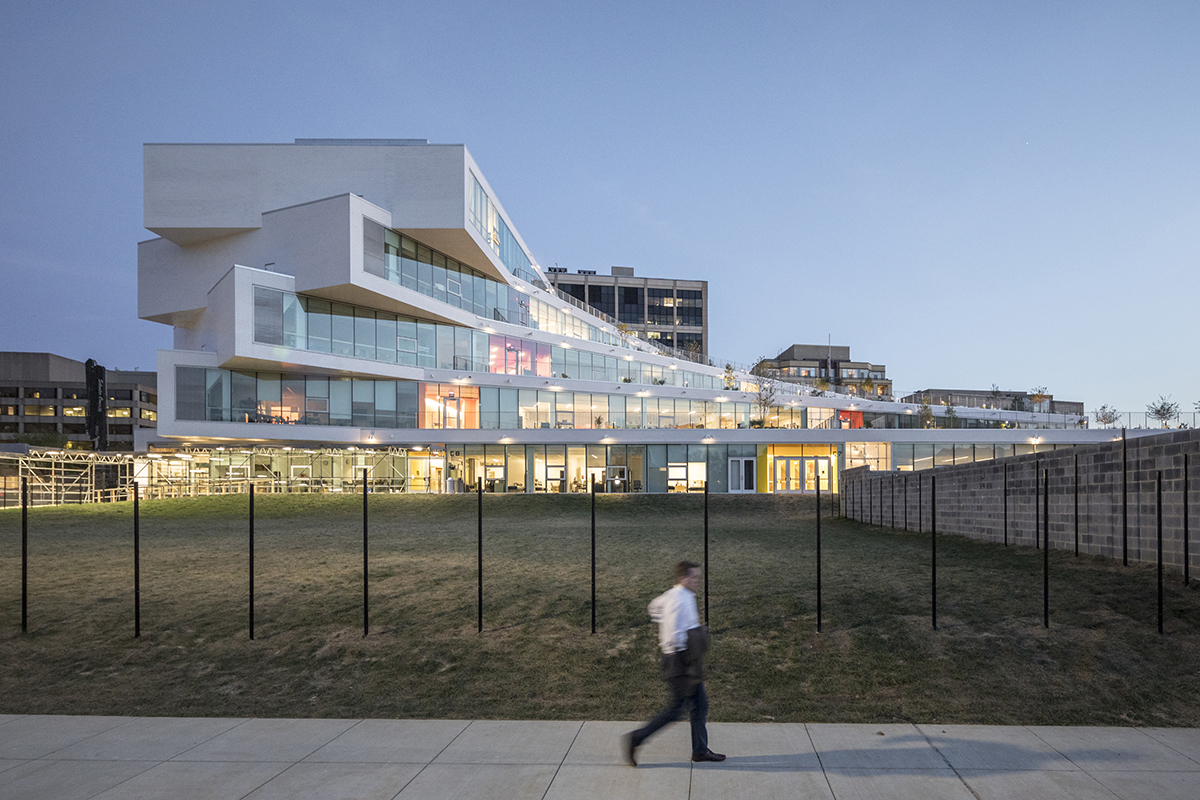 The ambiguity of how this building is supported is one of the most fascinating features of the structure and it is all due to the structural steel trusses behind the scene. Coordination and communication are required on every project but I imagine for this level of uniqueness, those two things had to be stepped up in a big way. It is so great to see what can be done with project teams when they all work together and think outside the typical box-shaped buildings! —2021 IDEAS² Judge Maysa Kantner, Atlanta Structural Steel Specialist, AISC

The Heights school Building in Arlington, Va., serves as the home for two educational programs: the Eunice Kennedy Shriver Program, which educates students best served in a specialized environment, and the H-B Woodlawn Program, which teaches self-motivation by making students accountable for their choices.

Due to the co-location of the two programs, careful planning to accommodate diverse technical requirements was paramount. As such, Arlington Public Schools set the goal for the design of creating the most cutting-edge 21st-century learning environment.

The concept for the five-story above-grade vertical urban school is based on the idea of using the building itself as a teaching tool. Outdoor classrooms, collaboration niches, writable vertical surfaces throughout, flexible classrooms, specialized maker spaces, advanced technology, supportive programming, and many other amenities make the Heights School learning environment unlike any other in the United States. The school is an excellent example of optimizing functional space to directly address user requirements.

The vertical design of the school creatively responds to site constraints and meets the main goals of providing a central space that connects the building levels and also giving access to outdoor spaces at all levels. The design team developed a scheme that creates separate classroom blocks that are all adjacent to terraces, which provides unique activities corresponding to their adjoining programs.

The new school, which opened in time for the 2019-20 academic year, consists of five stacked steel-framed “bars” that fan around a pivot. This fanning gives the feel of a one-story school building while also creating large open volumes beneath the bars. Fanning the bars around a pivot led to the development of an innovative load path concept using floating buttresses to support the corners of each bar.

The pivot was a natural location for vertical circulation and distribution of services, so a concrete core was designed to resist torsional, lateral, and gravity forces. The bars create floating corners on each side, and multiple structural concepts were evaluated to facilitate this design scheme, including cascading cantilevered steel beams with column transfers, cantilevered trusses parallel to each bar, and helical columns. Ultimately, the floating buttress design evolved from the helical column concept, where each column leans as the bar fans out. This created one helical load path at each corner that, while beautiful in structural elegance and simplicity, created sloped columns that occupied valuable interior space that couldn’t be lost. To preserve this space, the helical columns were pushed out to the perimeter walls, forming a truss and floating buttress system framed with W12 and W14 sections. Each truss uses standard bolted gusset connections and bearing plates, and the buttresses use welded connections. The floating buttress resulted in additional out-of-plane forces, which are resisted by horizontal diaphragm framing that transfers diaphragm forces back to the core.

To simplify erection, each truss was designed to be fully erected into place by putting an upper truss on the truss below it, using a few shoring posts for stability during erection. Where trusses intersected in plan, the chords simply passed over one another in elevation. Structural engineer Silman collaborated with steel fabricator Banker Steel to simplify load-path continuity through geometrically complex connections at critical locations.

The framing above the gym, library, and atrium are all standard or built-up sections, and the framing over the theater uses shallow trusses. Trusses were not feasible for the available space above the gym, so plate girders and heavy W36 sections were used to transfer the columns from above, supporting bar floor and terrace framing, and double-W24 sections ended up being the most economical solution over the atrium. A dramatic cantilever over the atrium reaches toward Wilson Boulevard to the south.

To achieve the shallow floor depth, as well as the aesthetic desires of the project’s architects, Leo A Daly and Bjarke Ingels Group, a dapped-end 24-in.-deep built-up double-web plate girder was used for the soffit. Due to the large terrace load from above and the short back span of this cantilever, the plate girder was anchored with a tension column in bar five. Above the theater, trusses were the optimal solution to meet the needs of potential future expansion, MEP routing, column transfers for the crossing bar above, and allowable floor depths.

Throughout the design process and especially early on, meetings between Silman, Banker Steel, and general contractor Gilbane were essential to ensuring economical solutions and constructability throughout design, as well as coordinating steel availability with the construction schedule, erection methods, preferred connection types, and site logistics. Some standard sections were changed to plate girders through this collaboration, while others remained heavy W36 beams spliced together in the field.

For more on this project, see the article “Pivot Point” in the December 2019 issue of Modern Steel Construction.