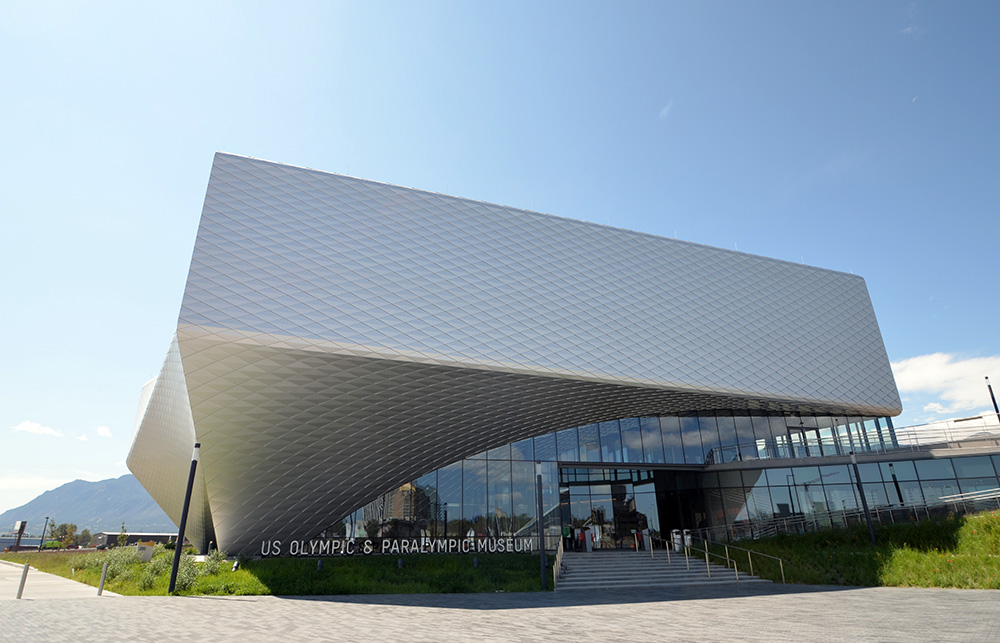 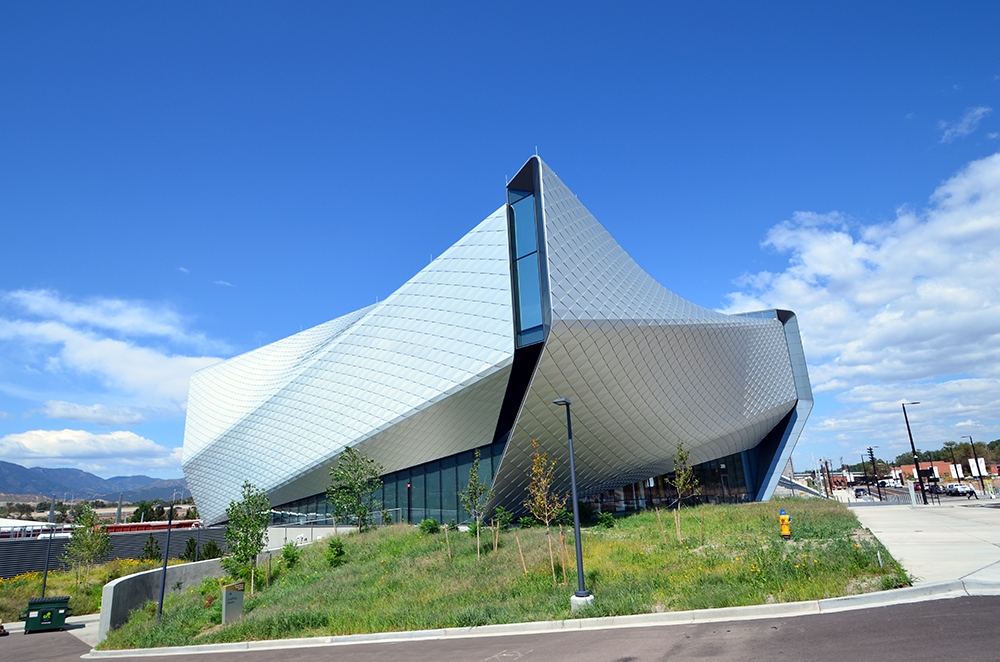 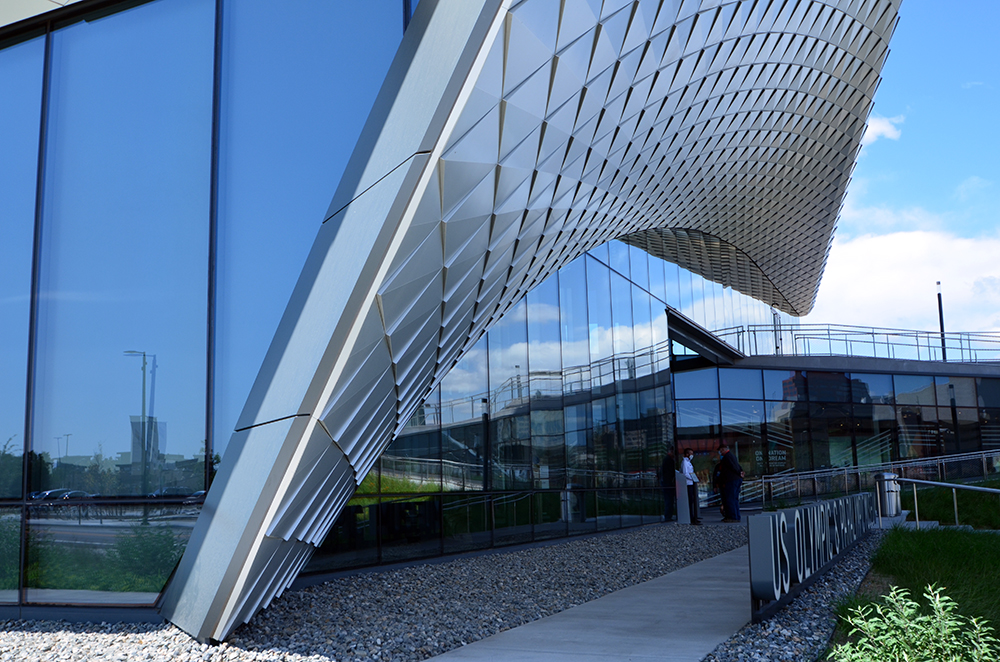 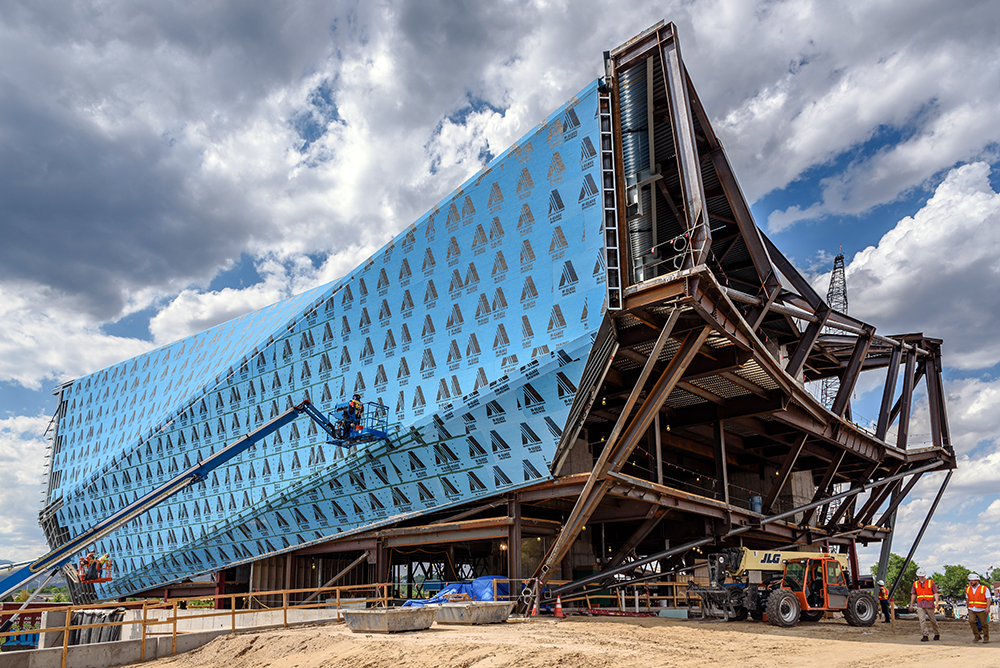 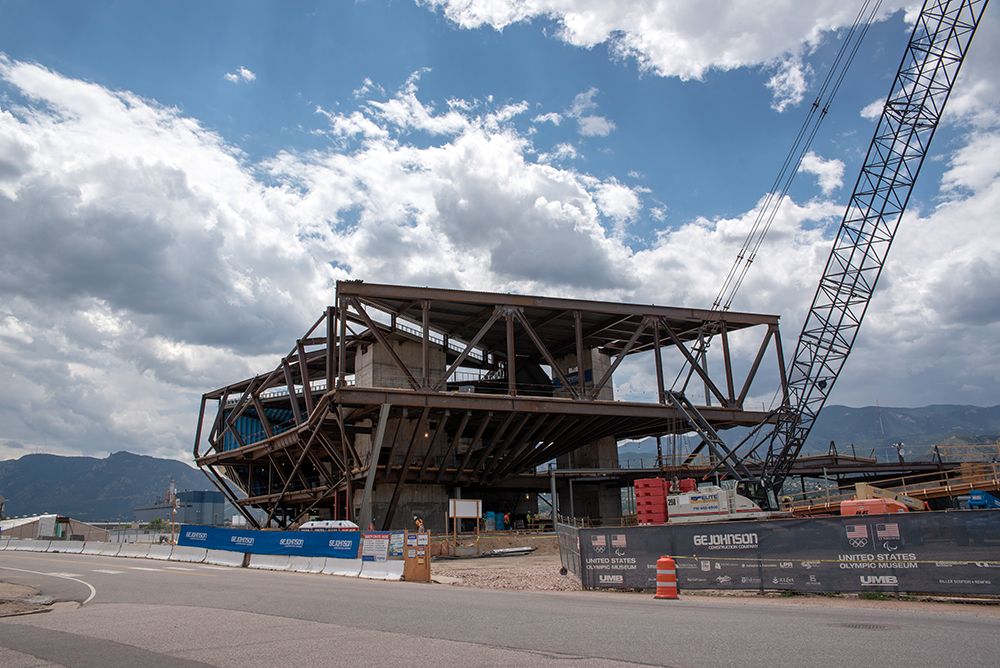 “This is probably the best example of new projects in the country that showcase a solution that could only be achieved in steel. Tolerances and coordination efforts made this unique structure come to life in a way no other material could have.” -David Fennell, structural steel specialist - Seattle market, American Institute of Steel Construction

This façade is stretched over a steel superstructure composed of 9,000 diamond-shaped panels that produce gradients of color and shade, giving the building another sense of motion and dynamism.

The museum also acts as an anchor for the new City for Champions District, forming a new axis and bridging downtown Colorado Springs to America the Beautiful Park. The design of the 60,000-sq.-ft building was founded on the idea of a continuous path from the top to the bottom to allow for accessibility, a key element of the project, to create a museum in which all visitors could enjoy the same experience.

The steel-framed building is composed of four volumes, arranged in a pinwheel formation that contains galleries, an auditorium, and events space surrounding a central atrium. Because steel is a material that can be easily manipulated, cut, and rewelded into many different shapes and forms, it could most easily accommodate the versatile shapes needed for the spiraling nature of the floors and overall complex geometry. It was also capable of supporting the long trusses, cantilevers, and sloping columns and floors most efficiently and also provided the fastest speed of construction.

The structural system offers an open, inviting façade to the public while evoking movement. It involved a variety of load path solutions that needed to be achieved to ensure this dynamic nature of the building, including a 140-ft-long-truss, tilted columns, and cantilevered floor members. Due to the building’s unorthodox shape, the steel framing and the aluminum façade both lean away from the center, which made steel erection more challenging than what would be associated with a more typical grid. The construction team countered this situation by placing temporary shoring points and implementing an extensive erection sequence before other tiebacks within the building could be made. In addition, the leaning nature of the building’s exterior required the lateral system to resist not only traditional wind and seismic loading but also loading from the gravity system.

Speaking of the façade system, each of the 9,000 metal panels has its unique conditions, including the connection of the exterior walls to the floor and roof elements. A  special clip was fabricated by the metal stud provider that allowed for the skin’s exterior framing to be adjustable for each individual condition. The panels are all folded in half, with a visible crease that creates two triangles, a design decision that led to a large amount of model testing and digital studies to discover the panels’ reaction to light. The possibility emerged for these “scales” to animate the surface as the light changes in Colorado Springs throughout the day.

Early involvement of the steel detailer, fabricator, and erector was extremely beneficial to the project, with all parties being at the table for most of the design meetings starting as early as schematic design and through to the construction documents phase. This approach helped the team coordinate how the loads needed to be placed to efficiently create the building. In fact, structural engineer KL&A also performed the steel detailing, which further enhanced the collaborative process. The relationship helped resolve an issue during construction where one of the concrete cores was misaligned near the top by roughly 5 in. The integrated approach between structural engineer/steel detailer and steel fabricator helped resolve the issue by quickly revising several connections, a scenario that mimics the individual contributions to teamwork that the museum celebrates.