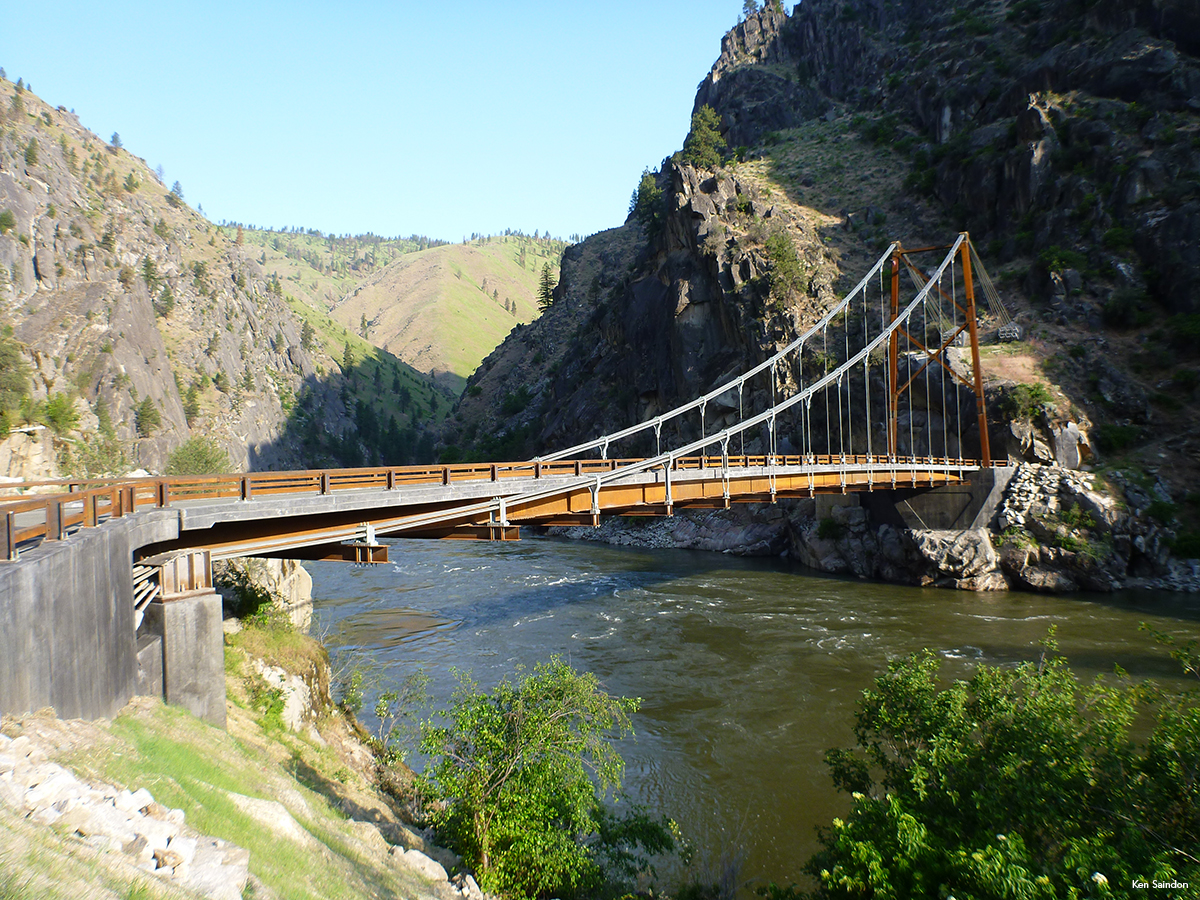 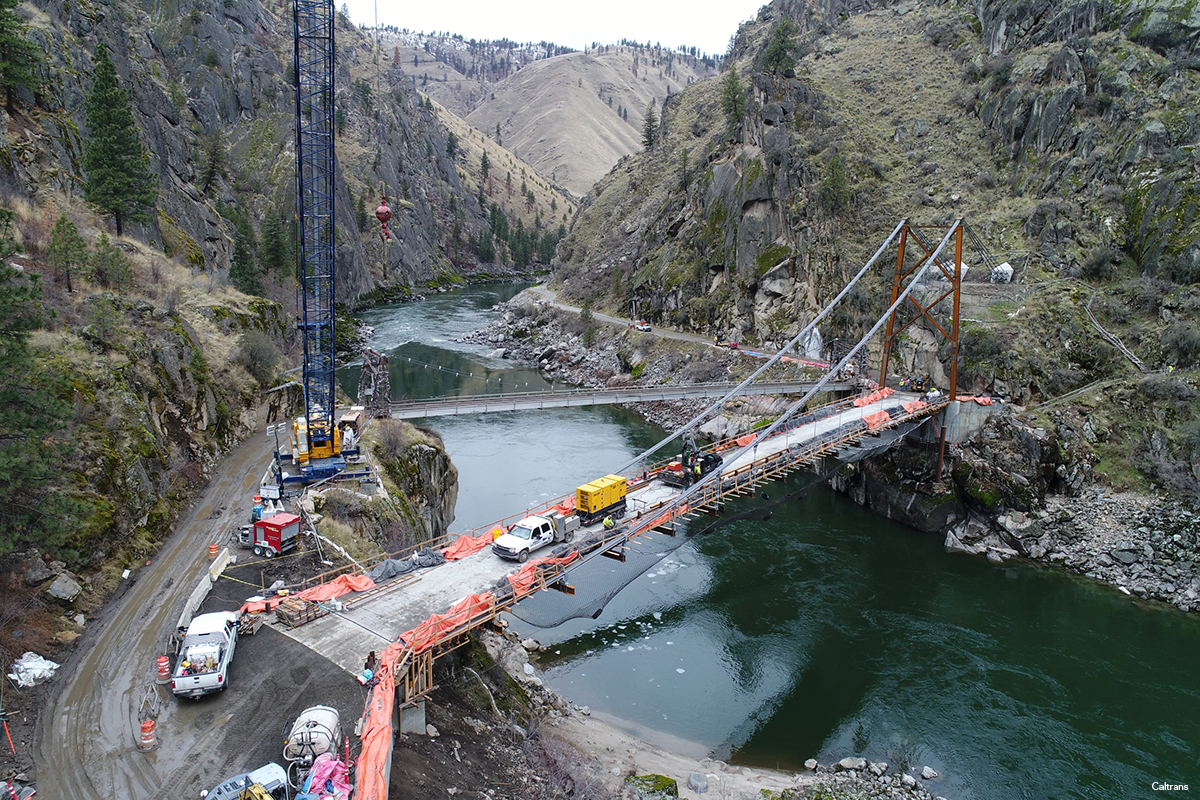 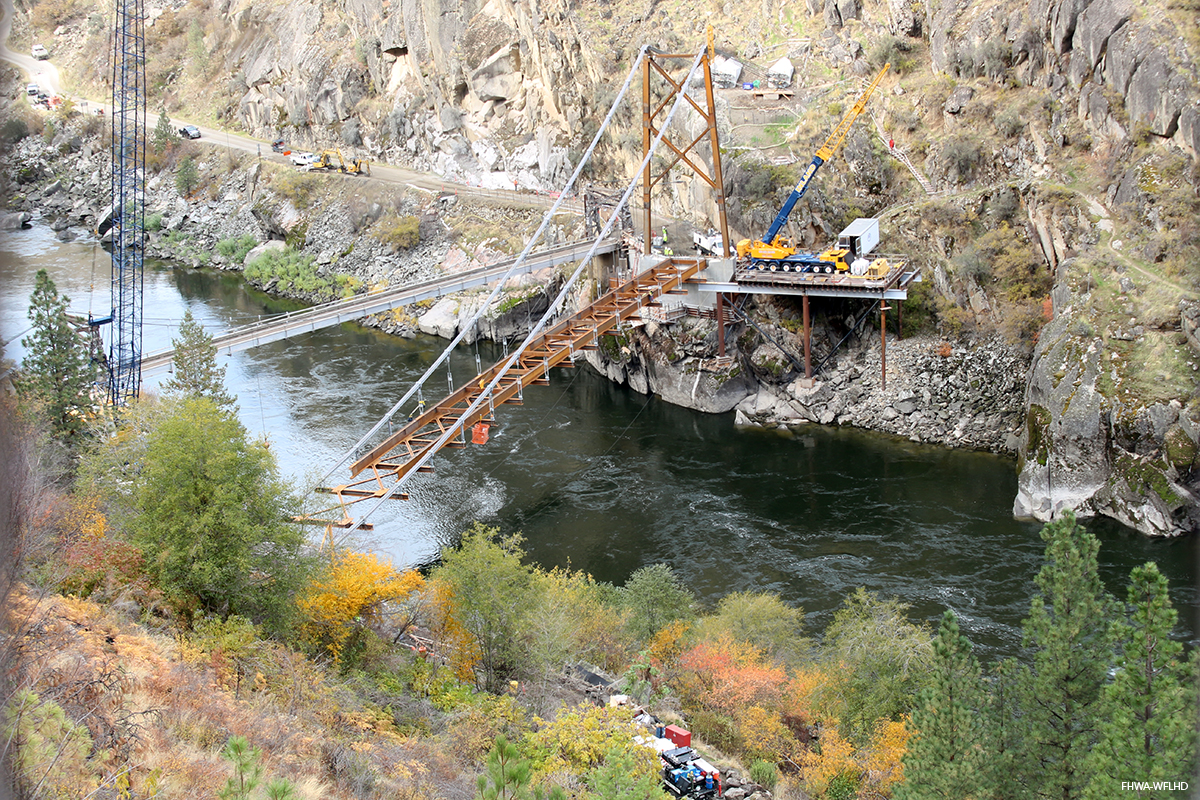 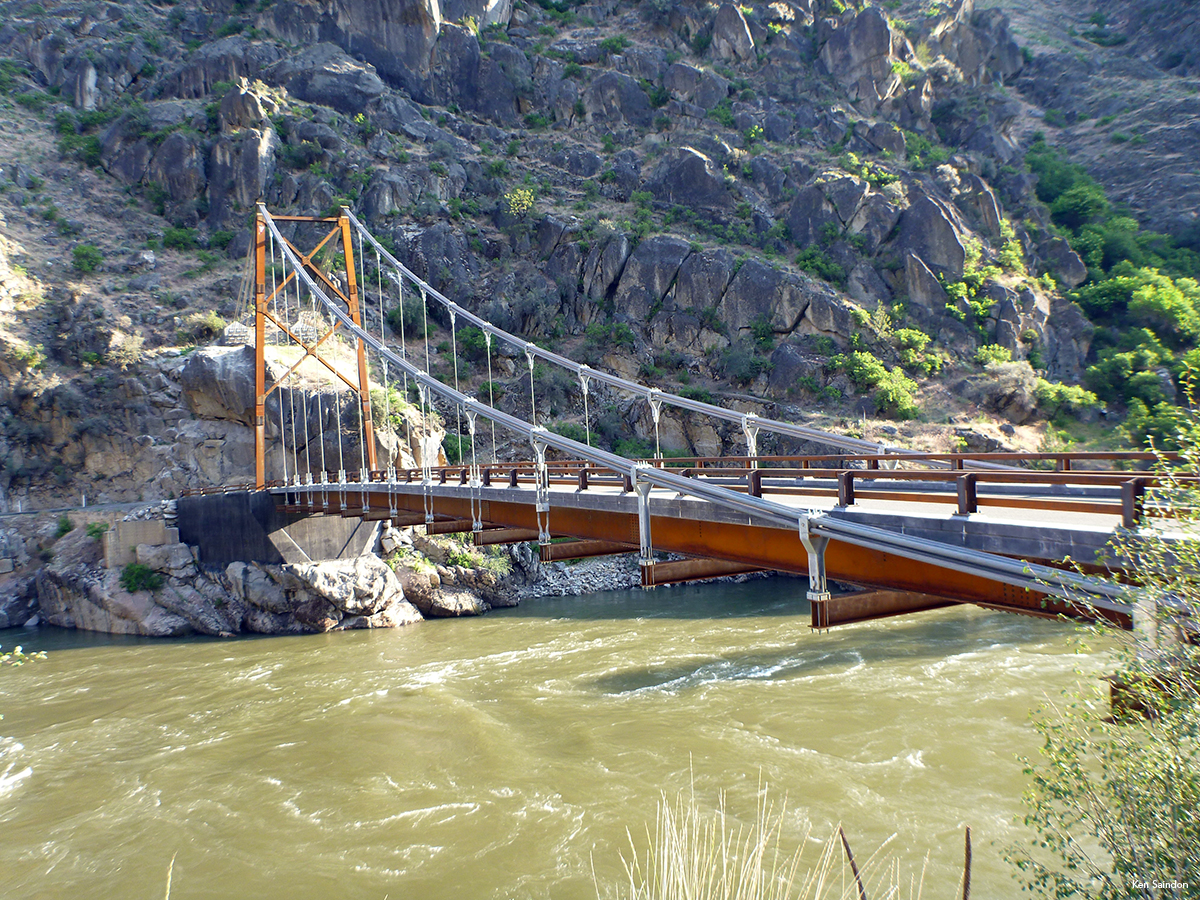 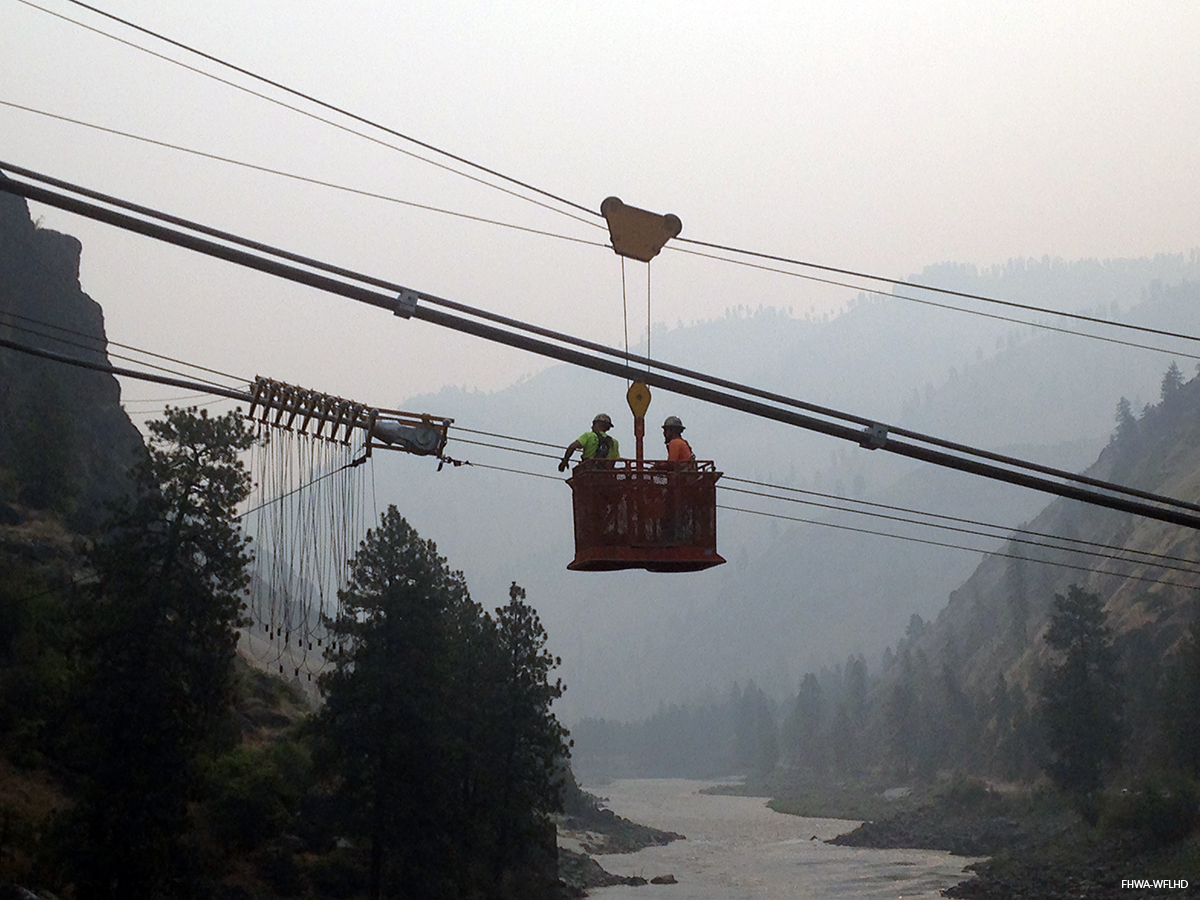 A main artery for recreational users of the river and forest lands, Salmon River Road provides access to homes, resorts, and commercial rafting ventures. The existing bridge, built in 1938, had reached the end of its service life and required replacement. The location is remarkable not only due to its beauty but also its limited access and very limited space available to stage construction equipment and materials. Choosing steel for temporary and permanent works was key to developing a feasible erection scheme on this difficult site.

After evaluating six different structure configurations, the team chose a single-tower, asymmetric suspension bridge. Competent bedrock at the site provided ample capacity for anchoring large horizontal forces, which favors arch and suspension bridge types over cable-stayed options. The team also concluded that a suspension option would be more constructable than an arch option, due to the light weight and flexibility of steel cables as well as limited access for construction equipment at the site. The bridge span length is 300 ft, and with a cable sag of 18.5 ft at mid-span, the resulting sag ratio (span/sag) of 16.2 is much flatter than the classical suspension bridge sag ratio of 10.

The site features a narrow shelf road with steep drop-offs in hard rock terrain. Standard construction techniques for such steep sites typically involve temporary benching, but the hard rock and pristine canyon location made benching both cost-prohibitive and inappropriate. A temporary crane platform on the north side of the river allowed for erection of the tower and cable anchorages. Additional temporary platforms facilitated construction at the north anchorage and behind the tower base. The existing southside roadway bench was wide enough to accommodate a crane while allowing vehicles to pass. All construction materials were staged and delivered from Riggins to the north end of the bridge. Project requirements for the bridge replacement included:

The site added additional complexity. Construction work could not impede the flow of traffic—both for vehicles on the bridge and rafters below it. Construction equipment is not allowed in the river, nor is any permanent construction in the 100-year flood plain.

Structural steel was integral to the success of the project, especially with regard to treading lightly on the site. The robustness of the erection equipment and temporary crane platform at the north abutment were directly proportional to the piece weights erected at mid-span over the river. The light weight of the structural steel sections, combined with the ease of connecting them using high-strength bolted splices, allowed for an erection scheme using only two fixed crane positions with reaches up to 160 ft.

Representatives from the National Park Service were instrumental in identifying key aesthetic concerns. The bridge deck overlay was designed as an ultra-thin bonded wearing course, with aggregate color that blends with the canyon setting. The bridge deck of cast-inplace concrete uses integrally colored, internally cured concrete to enhance long-term durability and reduce visual contrast by providing a color that mimics the dark appearance of the weathered granite rock outcrops adjacent to the bridge. A surface stain on the abutments and wind walls accomplishes the same objective.

The completed structure should last more than 100 years, thanks to its protection scheme. Class C galvanizing was specified for the steel cables, and Grade 50 weathering steel was used for the towers and superstructure, both for corrosion resistance and the aesthetic considerations mentioned above.

The community, both in terms of local residents and river user groups, has recived the project very positively. The bridge officially opened June 5, 2018 with a ribbon-cutting ceremony, and many attendees at the ceremony commented on how well the weathering steel finish complements the natural beauty of the canyon. The new single-tower bridge adds a touch of uniqueness to the canyon, with a force layout that reflects the constraints of the site.

For more on the Manning Crevice Bridge, see “Narrow Margin” in the October 2018 issue of Modern Steel Construction.