CHICAGO - Who will win the 2023 Forge Prize and $10,000? Will it be a groundbreaking idea to convert gas stations to electric charging stations, a self-sustaining micro city concept, or a transit center designed for a future that includes rideshare by electric airplane? Find out during a live streaming event in March.

“The Forge Prize is particularly exciting because it gives the next generation of great design innovators a chance to dream big and imagine how steel can bring about a bright future,” said Alex Morales, AISC’s senior structural specialist leading the competition. “Based on these three finalists, it’s clear that the future of visionary design is in good hands. I can’t wait to see what their initial concepts turn into after they work with a steel fabricator to refine them!”

These three finalists each take home $5,000 from the first round. They’ll work with a steel fabricator before presenting their final concepts to the judges during a live YouTube event in late March. At stake: the $10,000 grand prize and an invitation to present before an audience of the industry’s best minds at NASCC: The Steel Conference! 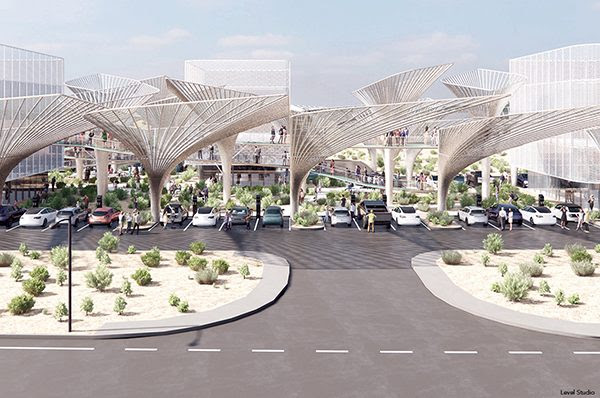 “Adaptive Micro Cities” envisions a self-sustaining, vertical micro city to revitalize a small island in an industrial zone in Portland, Ore. The building has separate zones for the fundamental parts of everyday life--spaces in which to live, work, and play--brought to life with a series of modular boxes. Steel allows for a simple design with strong bolted connections for easy assembly and disassembly in a confined space. Masamichi Ikeda and Junior Carbajal (both of JRMA Architects Engineers) will work with Alpha Iron President and CEO James Buchan in the second phase of the competition. 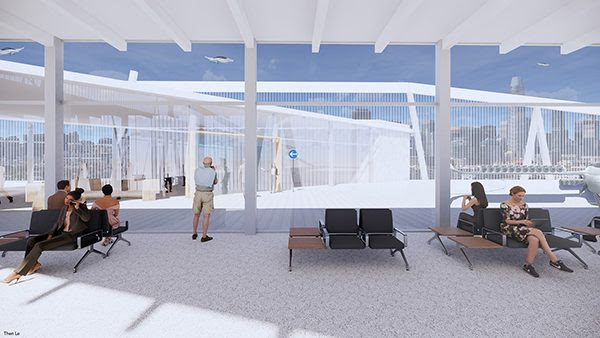 Envisioned for a site in San Francisco, the “Trans-connect” idea embraces the future of transportation with a multi-modal transit center for everything from high-speed trains to electric airplanes. The station features a skyport as well as terminals for bus and rail service, restaurants, and Airbnb spaces. Then Le of the Huntsman Architectural Group will partner with Zimkor President Casey Brown to further develop the technical aspects of the design.

Additional photos of all three finalists are available here.

Melanie Harris, AIA, LSSYB, NCARB, is currently the national healing practice director at BSA LifeStructures. Harris became passionate about peoples' wellbeing at age 15, when her mother died of cancer. However, instead of pursuing a career in medicine, she devoted herself to architecture for healing. She has worked with clients like MD Anderson Cancer Center since she earned her master's degree from Texas A&M University in 2006. She joined HOK's Houston healthcare team in 2014 and, in 2017, transitioned to lead HOK's healthcare practice in central Florida. She started as BSA's principal for Tampa in 2020 before moving into her current role as national healing practice director.

Sean Joyner, Southwest regional communications strategist at Gensler, is a writer and essayist based in Los Angeles. He previously served as an adjunct professor and director of communications at Woodbury University, where he received his Bachelor of Architecture degree. Joyner's essays and articles typically explore themes spanning history, pop culture, and philosophy and how they connect to the field of architecture, though his topics of exploration vary widely. Before launching his career in writing, Joyner worked in several firms as a designer and project leader, primarily on K-12 and some higher education work.

Rona G Rothenberg, FAIA, DBIA, is the president of AIA California. She brings decades of experience from more than 200 government, industry, healthcare, and higher education projects. In 2020, she received AIA’s Thomas Jefferson Award for Public Architecture. She has been a program and project management leader within public and private sector institutions for the past 35 years, including two decades in California state and local government. She has provided executive level leadership in master planning, design and construction delivery of over 200 institutional projects in multiple programs in government, industry, health care and higher education. Over her career, she has contributed to AIA national, state and local Board and committee leadership in justice and community-based projects as a city planning commissioner and in government and nonprofit board appointments. She is a devoted mentor, serving as a Distinguished Visiting Fellow of the College of Environmental Design of UC Berkeley and in local public school STEAM programs in Oakland, Calif., as well as through AIACA and national pipeline programs.