(Chicago, IL) – The Principal Riverwalk Pavilion in Des Moines, Iowa, has earned national recognition in the 2016 Innovative Design in Engineering and Architecture with Structural Steel awards program (IDEAS2). In honor of this achievement, members of the project team will be presented with awards from the American Institute of Steel Construction (AISC) during a ceremony to take place at the pavilion on Friday, September 30, at 10 a.m. The date coincides with national SteelDay, a day of recognition and learning about structural steel at networking events and tours being held at sites across the U.S. In conjunction with the day, Governor Terry E. Branstad has recognized the value and importance of the structural steel industry in Iowa with an official letter of recognition of September 30, 2016, as SteelDay.

The pavilion is one piece in a plan to encourage Des Moines residents and visitors to take advantage of the Iowa capital’s scenic riverfront. Situated next to a new recreational trail and waterfront and riverfront promenades at the west end of the historic Court Avenue Bridge, the triangular 2,200-sq.-ft pavilion was designed to mimic the prow of a boat. The angular space is clad with a folded black zinc skin and roof, and the west façade is louvered to allow for views upriver to the north while blocking the harsh, western sun. To accomplish this visual effect, an exposed steel frame was used to support the zinc skin, and steel tube sections are concealed within the skin itself. This structure discretely accommodates the multiple cantilevers and reduces the apparent thickness of this folded plane.

“The sleek metal roof cuts through the sky like a razorblade,” commented Colter Roskos, a PhD student in the University of Texas at Austin’s Department of Civil, Architectural and Environmental Engineering’s Ferguson Structural Engineering Laboratory, and the student juror in the competition.

The project was entered in the competition by its architect, Substance Architecture, Des Moines, Iowa. The other members of the project team include:

The 10 IDEAS2 winners for 2016 were chosen from nearly 100 submissions received from architectural and engineering and other project team member firms throughout the U.S. Each submission is reviewed and award winners are selected by a nationally recognized panel of design and construction industry professionals.

The IDEAS2 award dates back more than 50 years with AISC. And about this year’s winning pavilion, Roger E. Ferch, PE, president of AISC, said, “The entire pavilion project team has shown how structural steel can be used to create structures that combine beauty and practicality. The result is a structure that will serve its users extremely well, while providing an example of what can be achieved when designing and constructing projects with steel.”

Members of the media may request high-resolution images of the project by contacting AISC’s Tasha Weiss at 312.670.5439 or weiss@aisc.org. For more information about the IDEAS2 awards and to view all of this year’s winners, please visit www.aisc.org/ideas2. Also coinciding with SteelDay is a new People’s Choice competition which allows the public to vote for their favorite projects entered in the 2017 IDEAS2 Awards. Public voting will take place at www.steelday.org/vote only during the week of SteelDay (September 26-30). 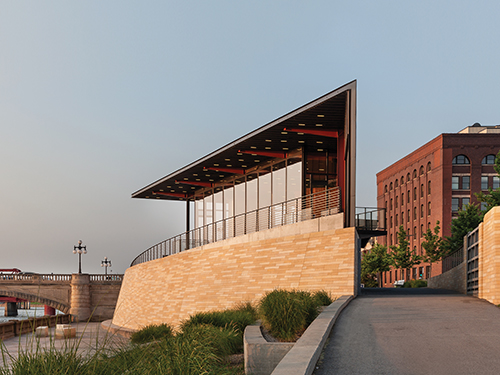