(Chicago, IL) – The United States Air Force Academy’s Center for Character and Leadership Development (CCLD), Colorado Springs, Colo., has earned national recognition in the 2018 Innovative Design in Engineering and Architecture with Structural Steel awards program (IDEAS2). In honor of this achievement, members of the project team will be presented with awards from the American Institute of Steel Construction (AISC) during a ceremony to take place at the building on Tuesday, November 13, at 1 p.m.

"The project is a simple and elegant expression of an idea that is in keeping with the campus at large and yet iconic in its own right," commented Lynda Leigh, SE, senior project manager at Turner Construction, Chicago, and the general contractor juror in the competition.

The CCLD supports the Academy’s mission to integrate character and leadership development into all aspects of the Cadet experience, while also serving as a think tank for leadership and character development initiatives nationwide. As the first building constructed in the Cadet Area since the 1990s, the CCLD creates a significant architectural counterpoint to the Academy’s iconic Cadet Chapel.

The CCLD features a dramatic, cantilevering 105-ft-long skylight, a design element that establishes a bold presence on the campus while bringing ample natural light into the building. With its complete integration of architecture and structural engineering, dynamic form and machine-like precision, the skylight is fluid yet disciplined. Its structure consists of diagonal steel plates composed in a triangular grid and precisely calibrated to resist lateral forces due to wind loading. The architecturally exposed structural steel (AESS) is devoid of embellishment or ornamentation, and its sleek connections are cohesive with the aesthetics of the structure. This glass-enclosed structure, shaped like a plane’s tail fin, aligns precisely with the North Star, Polaris, signifying the Academy’s mission to develop leaders of character. By aligning this new center for community and collaboration under Polaris, the design creates a meaningful architectural interpretation of the Academy’s aspirations.

The 12 IDEAS2 winners for 2018 were chosen from nearly 100 submissions received from architectural and engineering and other project team member firms throughout the U.S. Each submission is reviewed and award winners are selected by a nationally recognized panel of design and construction industry professionals.

The IDEAS2 award is the highest honor bestowed on building projects by the U.S. structural steel industry. And about this year’s winning U.S. Air Force Academy campus building, Charlie Carter, SE, PE, PhD, president of AISC, said, "This instant icon is the soul of the campus just as its neighbor, the acclaimed Cadet Chapel, is the spirit. Simultaneously complementary and distinct, it’s a wonderful addition to the campus."

Members of the media may request high-resolution images of the project by contacting AISC’s Tasha O’Berski at 312.670.5439, oberski@aisc.org. For more information about the IDEAS2 awards and to view all of this year’s winners, please visit www.aisc.org/ideas2. 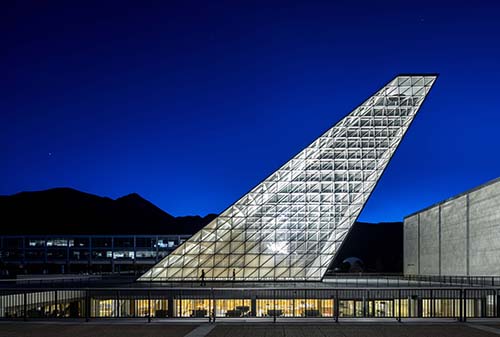