(Chicago, IL) - A new steel/concrete composite high-rise core wall system is revolutionizing the design and construction of tall buildings. The system uses two steel plates connected by steel spacing ties with the cavity between the plates filled with high-strength concrete. It provides the potential to shave months off the construction schedule--and reduces costs--compared with a traditional concrete core system. And most importantly, the new system has performed spectacularly in laboratory tests.

This tall shear wall system was developed through a series of studies and advancements by Magnusson Klemencic Associates (MKA). “The system is an evolution of many years of our work with composite steel columns, steel plate shear walls, and performance-based seismic design,” Jon Magnusson, senior principal at MKA, explained. “Ron Klemencic has led the development of the system working with MKA engineers, contractors, steel fabricators, university researchers, AISC, and obtained additional financial support from AISC and the Charles Pankow Foundation for the effort.”

This system is the first application of rapid tall composite shear wall construction. There have been other applications of shorter composite walls but not to this scale, and primarily for loads perpendicular to the wall. The tall shear wall effort has included research and lab tests of the system by Prof. Amit H. Varma at Purdue University and Prof. Michel Bruneau with the University at Buffalo. Klemencic added, “Amit and Michel had completed research and development on short wall systems and their new work and contributions on the tall shear walls have been extremely valuable.”

The system grew out of efforts to expedite and harden safety-related nuclear structures, and AISC has published the specification, Specification for Safety-Related Steel Structures for Nuclear Facilities (AISC N690-12s1, 2015), and a new design guide, Design Guide 32: Design of Modular Steel-Plate Composite Walls for Safety-Related Nuclear Facilities, co-authored by Varma, to facilitate their design and review.

Klemencic, chairman and CEO at MKA, recently received the distinguished engineering alumni award from Purdue University. During a recent presentation at Purdue, Klemencic offered sage advice to students and also showed a video that MKA produced as part of their construction study of this system on the Rainier Square project in Seattle. The study compared the speed of construction of a traditional concrete core and the new steel-concrete composite core. The result was dramatic. While the concrete core building took 474 working days to top out, the hybrid wall building took only 377 working days.

“The steel modules are fabricated in shops with quality control and automation,” explained Varma. Because the steel framing doesn’t have to wait for the concrete core, the construction of which is far slower than the erection of the rest of the building’s steel frame, the system greatly speeds construction.

The system provides the strength, stiffness, safety and serviceability of a reinforced concrete core without the negatives of rebar congestion and complex formwork. In addition, using the system means the entire structure is built to the tight tolerances standard in steel construction, rather than the broader tolerances permitted in concrete construction. “It fundamentally changes the game,” Klemencic said.

Time is saved by eliminating the installation of rebar and the construction of formwork. And without the need to wait for the concrete to cure, the core and perimeter steel can rise in tandem, resulting in much faster erection.

“Purdue’s research project is scheduled to be complete mid-2019,” he explained. “In addition to this initial funding for the research being done at Purdue University and the University at Buffalo, AISC along with the Charles Pankow Foundation is funding a FEMA P695 study at both universities. It is expected when this study is completed in mid-2018, the CCSPSW is expected to be rated with an R Factor of R = 8 which is the highest Seismic Response Modification Factor of any shear wall system of any material.”

And the system is not just for use in seismic areas. “There is a great potential for the use of Coupled Composite Steel Plate Shear Walls in wind-controlled buildings,” added Kruth.  “In fact, Rainier Square in Seattle, where the CCSPSW will be used first, is a wind controlled design. The other potential is not just for high-rise structures. This system is very desirable for use in low-rise structures due to its speed of construction enabling the schedule to be shortened.”

A presentation on this composite coupled core wall system by Klemencic and Varma is scheduled at the 2018 NASCC: The Steel Conference (April 11-13) in Baltimore. “This system represents the greatest innovation in steel in high-rise buildings in decades. It offers the performance of a concrete core with the speed and benefits of steel construction,” Magnusson concluded.

Members of the media may request high-resolution photos by contacting AISC’s Tasha O’Berski at 312.670.5439 or oberski@aisc.org. 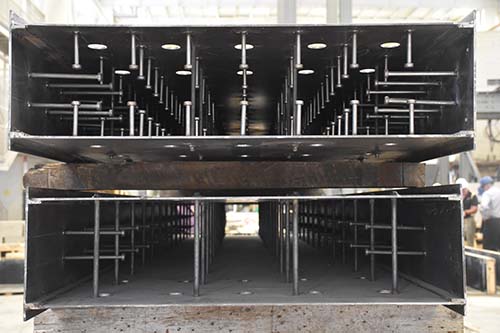 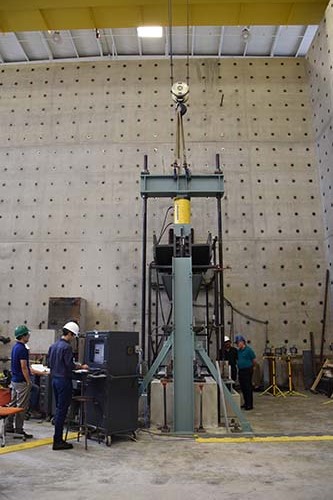