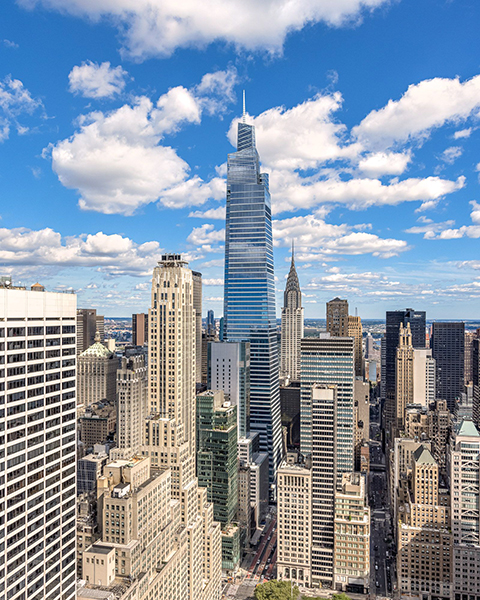 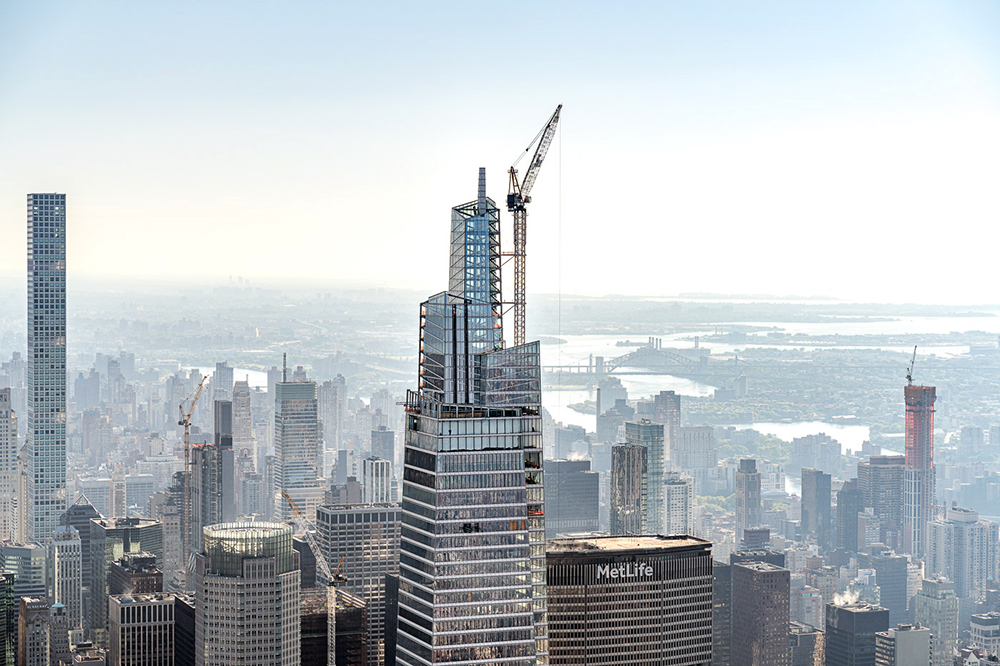 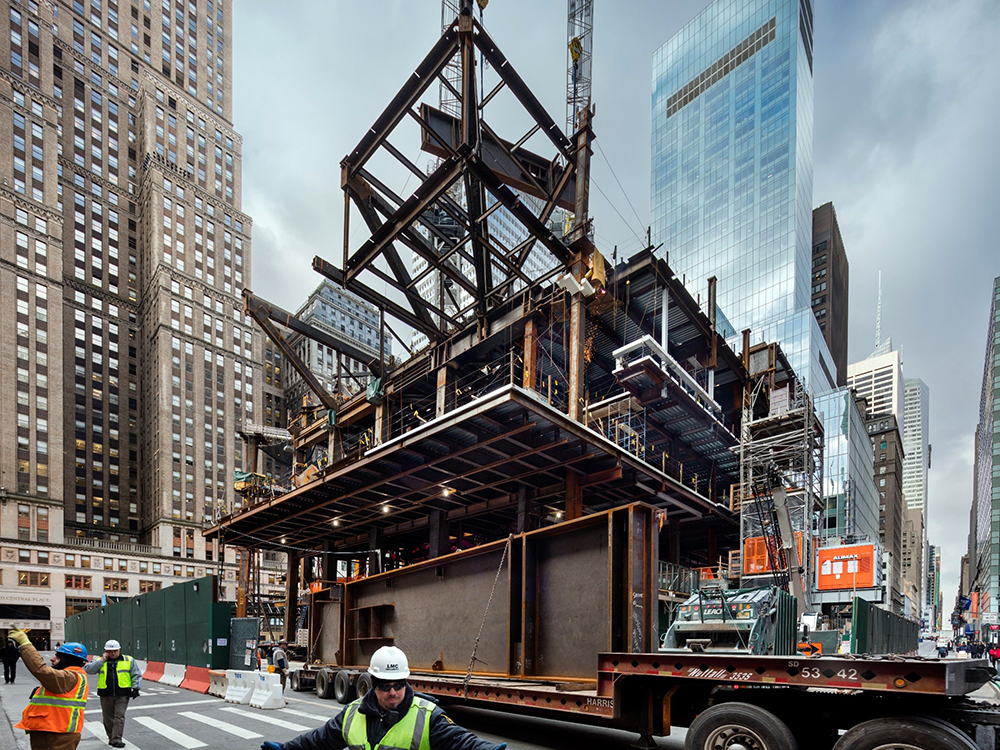 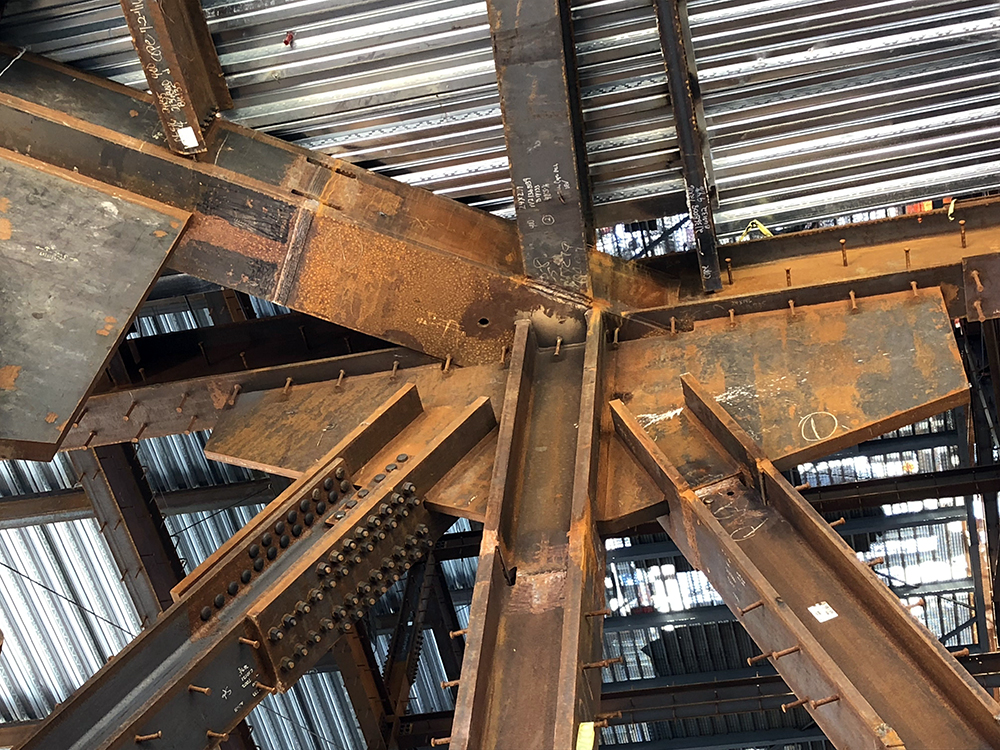 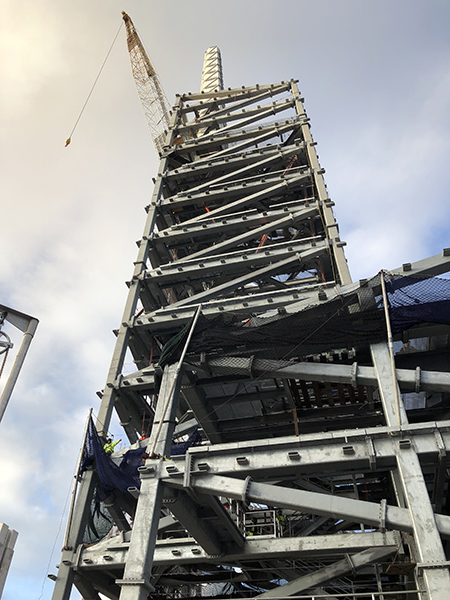 The complexity of joining to the train station coupled with the intermediate trusses up through the tower made this project stand out. The variety of connections and coordination makes this project very impressive. -Bruce McEvoy, AIA, LEED AP BD+C, principal, design director, Perkins & Will

One Vanderbilt stands out above the rest.

The building’s simple geometry of tapering rectangular volumes integrates the aesthetics of the golden age of high-rise buildings with contemporary concepts of designing for sustainability and enrichment of the public realm. The façade is clad in alternating strips of glass and terra cotta and acknowledges the building’s proximity to Grand Central Terminal (right across the street) and other historical buildings. A dramatic fourth-floor cantilever creates a setback through which the Vanderbilt corner of the landmarked terminal can be viewed without obstruction.

Behind the curtainwall stands a frame designed by structural engineer Severud  Associates and composed of 26,000 tons of steel. The building features floor-to-floor heights ranging from 14 ft 6 in. to 24 ft, with mostly column-free floorplates and stunning 360° views through floor-to-ceiling windows, and best-in-class infrastructure. The core is a hybrid system of steel framing and high-strength concrete shear walls, which allowed construction manager AECOM Tishman to better control the schedule (the tower was completed six weeks ahead of schedule, despite the onset of the COVID pandemic during its last six months of construction). Supported by a concrete mat more than 9 ft thick, the core is augmented by steel outrigger trusses at three intermediate levels that were coordinated closely with the MEP consultant to minimize interference with the building’s advanced mechanical systems. Additionally, steel tuned-mass damper keeps accelerations within a comfortable range for building occupants.

Column transfer systems at the fifth and 12th floors give the building its distinctive shape and required floor-deep trusses. By using steel members, the engineers were able to reduce the potential obstruction of chords and interior diagonal members. At truss nodes, forgings were used to make connections as compact as possible while also providing a smooth flow of forces and simplifying field work; forged steel is both isotropic and weldable. In fact, where two or more trusses met at the core, no other type of connection would have been practical.

The efficiency and economy of wide-flange sections made them the first choice for the bulk of the building framing, but box columns and built-up plate girders were used where loads exceeded the capacity of rolled members. The availability of plate with different thicknesses and widths coupled with readily adaptable welding details allowed the design team to create sections that could accommodate any geometrical constraint.

At the top of the building, where the “crown” and “snorkel” elements define the upper ends of the building’s tapering rectangular volumes, hollow structural sections (HSS) were the clear choice to support the ins and outs of the curtainwall. Their high capacity in bending—even for large aspect ratios and long unbraced lengths—and their affinity to shop-welded connections simplified fabrication. In addition, field-bolted end-plate splice connections, used for the horizontal and diagonal members, greatly facilitated erection.

Capping everything off is a 128-ft spire, also constructed of steel plate, atop the snorkel. The spire was fabricated in shippable segments with flanged connections that were easily bolted at the lofty height of 1,401 ft. (Glass was considered for the  infill panels, but it could not withstand the heat generated by the nearby exhaust flues.) A separate wind tunnel study determined wind loads and forces and the interaction of the spire with the building frame. As a result, diagonal stiffeners were added to each face of the spire to disrupt wind flow and help control icing. As a bonus, the stiffeners continue the architectural effect of directing the eye skyward to the very top.

The tower employed a steel-first erection sequence pioneered by Severud. Columns, girders, and lateral bracing at the core were designed to stand alone to a maximum height of 12 stories. As steel erection proceeded, reinforced concrete shear walls were placed below. Using a self-climbing form system within the core and hand-set forms from outside, concrete work followed the structural steel up the building, usually within six floors from the top. This approach allowed construction manager AECOM Tishman to absorb potential delays in concrete placement while maximizing the impact of speedy erection times on the overall schedule.

The core walls—the primary component of the lateral force-resisting system— are 30 in. thick with compressive strengths up to 14,000 psi; grade 80 steel reinforcement was used throughout. Controlling lateral drift and motion is especially critical to the performance of supertall buildings, so the concrete shear walls are augmented by steel outrigger trusses at three intermediate mechanical levels. The entire lateral system was designed based on parameters established by RWDI, the project’s wind tunnel and micro-climate specialist. In response to their analysis of occupant comfort, a tuned mass damper was added near the building’s peak to keep accelerations within comfortable limits. Due to vertical space constraints, a complex system of two steel masses was devised: one hung from above, the other supported on the floor, and each tied to the other to extend the range of vibration frequencies.

After the column transfer systems at the 5th and 12th Floors were erected, optical targets were installed at critical locations on the framing. As erection proceeded, the targets were surveyed from the Chrysler Building and other neighboring towers to confirm behavior and inform the erection process farther up the building, for example, the need for shims at column splices.

For more information on One Vanderbilt, see “Super Fast, Super Tall” in the March 2021 issue of Modern Steel Construction.