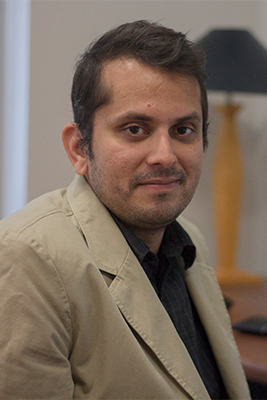 The American Institute of Steel Construction has awarded its 2022 T.R. Higgins Lectureship Award to Amit Kanvinde, PhD, professor of civil and environmental engineering at the College of Engineering at University of California, Davis.

Kanvinde presented“Column Base Connections: Research, Design, and a Look to the Future” as a keynote speaker during NASCC: The Steel Conference in Denver. Kanvinde shared his findings from 15 years of research into the behavior, design, and structural interactions of various types of connections, including exposed, slab-overtopped, and embedded connections. The lecture also included prospective developments in base connection design, as well as insight into a revision of the AISC Design Guide 1: Base Plate and Anchor Rod Design.

In addition to his contributions to the understanding of fixed column bases, Kanvinde is a member of AISC’s Connection Prequalification Review Panel (CPRP) and the Committee on Research as well as an ad hoc committee on box columns. In 2017, AISC awarded Kanvinde a Special Achievement Award for his research on column connection details including requirements for column splices.

“The Higgins award is well-deserved, not only because of his unique contributions to the field of steel column bases, but also because he has made several significant contributions to our understanding of steel structures in his career so far,” Eatherton said.

Amit Kanvinde received his Bachelor of Science in civil engineering from IIT-Bombay (1999), and his master’s (2000) and doctorate (2004) from Stanford University. He is a professor in (and formerly the Chair of) the department of civil and environmental engineering at the University of California, Davis.

Kanvinde’s research is focused on the seismic response of steel structures and connections. His work with AISC includes research on column base connections, column splices, and fillet welds, and has been cited in standards including AISC 341 (Seismic Provisions for Structural Steel Buildings) and the forthcoming AISC 342 (Seismic Provisions for Evaluation and Retrofit of Existing Structural Steel Buildings). He currently serves on the AISC Connection Prequalification Review Panel (CPRP) and the Committee on Research, as well as an ad hoc committee on box columns. He previously received AISC’s Special Achievement Award (2017) and the Norman Medal (2008), Walter Huber Research Prize (2016), and the State of the Art of Civil Engineering Award (2018), all from the American Society of Civil Engineers.

What is the T.R. Higgins Lectureship Award?

Each year, AISC's T.R. Higgins Lectureship Award recognizes an outstanding lecturer and author whose technical paper or papers, published during the eligibility period, are considered an outstanding contribution to the engineering literature on fabricated structural steel.

The award is named for Theodore R. Higgins, former AISC Director of Engineering and Research, who was widely acclaimed for his many contributions to the advancement of engineering technology related to fabricated structural steel. The award honors Higgins for his innovative engineering, timely technical papers, and distinguished lectures.

Winners will receive a framed certificate, which is presented at NASCC: The Steel Conference. Winners receive a $15,000 cash award and will present their lecture, upon request, at professional association events.

Amit Varma, the Karl H. Kettelhut Professor of Civil Engineering and Director of the Bowen Laboratory of Large-Scale CE Research at Purdue University’s Lyles School of Civil Engineering, has dedicated his academic and professional life to the development of innovative steel-concrete composite structures for the built infrastructure including commercial, industrial, and safety-related nuclear structures. He has conducted fundamental research leading to the development of design provisions for composite members, connections, and overall structural systems subjected to extreme loading conditions including seismic, fire, blast, and impactive loading.

Varma's 2021 TR. Higgins Lecture is titled "SpeedCore and Steel-Concrete Composite Construction: The Best of Both Worlds."

If your organization is interested in hosting a T.R. Higgins lecture, contact Christina Harber, director of education, at harber@aisc.org. AISC reimburses the speaker's travel expenses for qualifying events.

Theodore R. Higgins joined the Institute in 1940 as chief engineer and was its director of Engineering and Research from 1945 to 1968. During his tenure, he was involved in all aspects of the Institute's wide variety of research activities. He played an especially prominent role in the more than 20 years of research, which led to the development of plastic design techniques for steel structures. Theodore authored the Institute's first manual on plastic design, Plastic Design in Steel.

A resolution adopted by the Institute's Board of Directors honored Higgins for his unparalleled service to the structural steel industry. The resolution defines him as a pioneer in developing the research and engineering principles which form the basis of steel design and construction today. "Theodore Higgins possessed that unique ability to translate research results into practical applications," the resolution reads.

Each year AISC invites a distinguished panel of industry experts to judge the nominations for the T.R. Higgins Lectureship Award. The jury reflects a blend of professional insight, industry experience, and academic excellence.

AISC thanks the following jurors for the time they spent evaluating the nominations for the 2023 award: