A Seattle high-rise using a first-of-its-kind core system. A staircase that looks like a floating ribbon. A performance venue named for a rock-and-roll pioneer. A museum designed to look like an athlete in motion.

What do they all have in common?

They're all steel-framed. And they’re all winners.

Specifically, these four projects, as well as five others, are winners of the 2022 AISC IDEAS²  Awards.

Why "IDEAS²"? Because the program recognizes Innovative Design in Engineering and Architecture with Structural Steel. Awards for each winning project are presented to the project team members involved in the design and construction of the structural framing system—including the architect, structural engineer of record, general contractor, owner, and AISC member fabricator, erector, detailer, and bender-roller.

New buildings, as well as renovation, retrofit, and expansion projects, are eligible, and entries must meet the following criteria:
• A significant portion of the framing system must be wide-flange or hollow structural sections (HSS).
• Projects must have been completed between January 1, 2019, and December 31, 2021.
• Projects must be located in North America.
• Previous AISC IDEAS² award-winning projects are not eligible.

This year’s judges considered each project's use of structural steel from both an architectural and structural engineering perspective, with an emphasis on:
• Creative solutions to the project's program requirements
• Applications of innovative design approaches in areas such as connections, gravity systems, lateral load-resisting systems, fire protection, and blast protection
• The aesthetic impact of the project, particularly in the coordination of structural steel elements with other materials
• Innovative uses of architecturally exposed structural steel (AESS)
• Advancements in the use of structural steel, either technically or in the architectural expression
• The use of innovative design and construction methods such as 3D building models, interoperability, early integration of steel fabricators, alternative methods of project delivery, and sustainability considerations

This year’s judging was a bit different than in years past. Instead of having a small panel (typically five or so) judge every category, we expanded the number of judges and split the judging
up by category. We also had the submitters of the finalists/highest-scoring projects for each category submit brief videos. From there, National and Merit winners were decided.

AISC thanks this year's judges for their time and enthusiasm:

The winners will also be featured in the May 2022 issue of Modern Steel Construction magazine. In addition to substantial press support and publicity through AISC’s own print and online media, winning teams have the unique opportunity to present their projects to the AEC community during special webinars or live events throughout the year.

What are the IDEAS² Awards?

Sponsored by the American Institute of Steel Construction, the Innovative Design in Engineering and Architecture with Structural Steel (IDEAS²) Award program recognizes projects that illustrate the exciting possibilities of building with structural steel. The IDEAS² awards showcase the innovative use of structural steel in:

AISC’s award programs have celebrated landmark structures built with structural steel since 1960. These architectural icons span generations and stand the test of time. AISC recognizes and promotes these projects in recognition of their impact in terms of structural innovation, advances in safety, benefit to the local community, and environmental consciousness.

While many of the winners are landmark structures, the awards program also honors smaller, less well-known projects. What all of the winners share is a commitment to innovation and imaginative design!

AISC had a number of award programs celebrating landmark structures built with structural steel since 1960. Regardless of which award they won, these architectural icons span generations and stand the test of time. AISC recognizes and promotes these projects in recognition of their impact in terms of structural innovation, advances in safety, benefit to the local community, and environmental consciousness.

While many of the winners are landmark structures, the awards program also honors smaller, less well-known projects. Winners have included widely recognized projects such as The Gateway Arch in St. Louis and The National Museum of African American History and Culture in Washington, D.C. as well as an outstanding monumental stair, a gorgeous public transit station, and the sustainable equipment barn at a winery in addition to jaw-dropping high-rises and striking education buildings. What all of the winners share is a commitment to innovation and imaginative design!

In 2006, AISC joined its two previously separate architecture and structural engineering awards programs (EAE and IDEAS) into one: The IDEAS² Awards. This awards program was designed to recognize all team members responsible for excellence and innovation in a project’s use of structural steel.

The Innovative Design and Excellence in Architecture with Steel (IDEAS) Awards, presented from 1997-2005, recognized those designs where structural steel formed a prominent architectural feature of a building, either as an exterior or interior application.

The Engineering Awards of Excellence were presented annually from 1997-2005 to recognize engineering excellence and innovation in steel-framed buildings.

AISC established the Architectural Awards of Excellence in 1960 to recognize and honor outstanding architectural design in structural steel and to encourage further exploration of the many aesthetic possibilities that are inherent with steel construction. 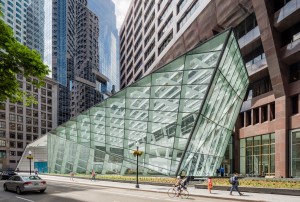